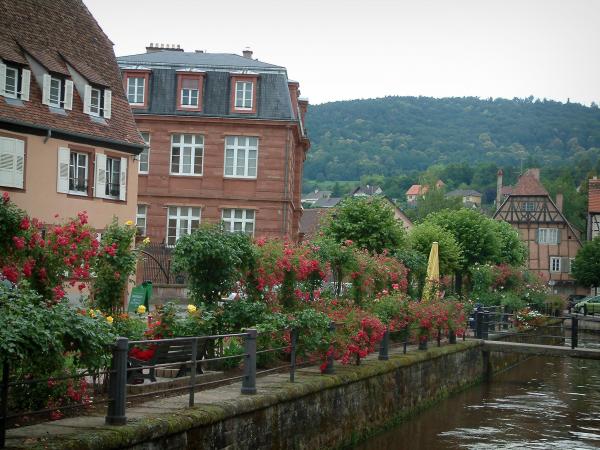 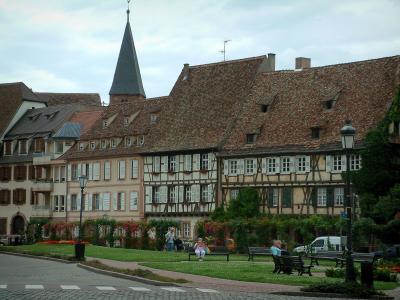 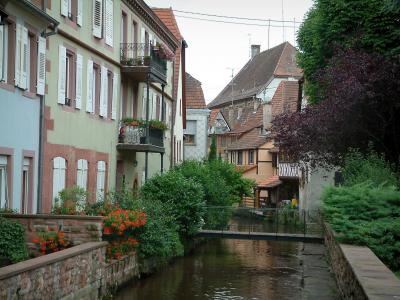 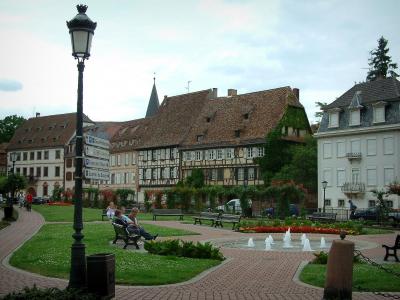 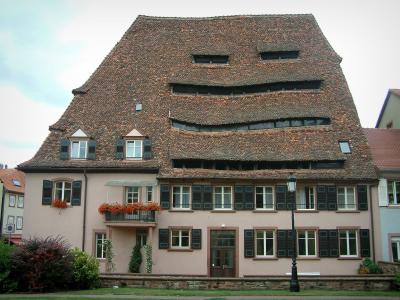 Campsites in the Bas-Rhin
Find a great selection of ideas for your holidays! Get inspired and compare offers.
Book now

This city of the North of Alsace is very charming with its River Lauter, its ramparts and its old houses. In the heart of Wissembourg, the Saint-Pierre-et-Saint-Paul church, which is the biggest Gothic church of Alsace after the cathedral of Strasbourg, is decorated with magnificent stained glass windows.

The Westercamp museum is in a pretty winegrower's house and explains the history of the town. After a visit of the monuments of the city and a romantic stroll on the flower-bedecked banks of the river, charming tea rooms are the perfect place to stop for a rest and a sweet treat.

Campsites in the Bas-Rhin
Find a great selection of ideas for your holidays! Get inspired and compare offers.
Book now

Wissembourg is a town in the Bas-Rhin, in the Greater East, north of the former Alsace region, 30 km northeast of Haguenau. Its territory borders on Germany (state of Rhineland-Palatinate) and is included in the Regional Nature Park of the Vosges du Nord, of which it is the "gate town" thanks in particular to its 2,700 hectares of forest (a little more than Half of the 48 km² of the area of ​​the commune).

Wissembourg which has a population of about 8,000 since its merger with the village of Altenstadt (750 inhabitants) in 1974 was founded by Benedictine monks who established an abbey there during the High Middle Ages. Its development and its radiance are rapid and the city endowed with ramparts adheres to the League of Rhineland Cities in 1254 and is part of the Decapolis in 1354, the alliance of the ten free cities of Alsace. After the Treaty of Westphalia, which placed the city under French sovereignty, Wissembourg had the privilege of welcoming the exiled King of Poland, Stanislas Leszczynski. His daughter Marie learned of Louis XV's request for marriage, and the marriage was proclaimed in the church of the city in 1725. Having already suffered from the wars of Religion (the city had chosen the Reformation) then conflicts punctuating the seventeenth, XVIIIth and XIXth centuries, Wissembourg is the scene of decisive fighting in 1870 then in 1944 and 1945.

However, the city has preserved an important architectural and cultural heritage. In the heart of a green environment, this makes the city where animations are varied a tourist stage of great interest.

From its rich and sometimes eventful past, Wissembourg has inherited many monuments and buildings that make the city a real jewel.

A visit can begin with the discovery of the abbey church Saints-Pierre-et-Paul, considered the second Gothic building of the region. Its cloister, its monumental fresco and its stained glass windows (but the centerpiece of the eleventh century, depicting Christ, is deposited in Strasbourg), made its celebrity. Do not forget the Romanesque chapel and the Dubois organ. Open every day from 9 am to 6 pm from April to October and from 1:30 pm to 4:30 pm from November to March. Free or guided tour. For further information, please call +33 3 88 94 16 31.

We will continue with the former convent of the Dominicans that the monks abandoned during the Reformation, in the middle of the sixteenth century. It then became a hospital, then a barracks, and now a cultural center. Close on Sunday. For further information, please call +33 3 88 94 11 13.

It is still necessary to see the church of St. John, where the Reformation was preached as early as 1522. It should be noted that its Romanesque bell-tower dates from the thirteenth century. Open every day. Free or guided visit by calling +33 3 88 94 10 11.

The Salt House (15th century), a hospital transformed into a salt deposit, the Stanislaus Palace, where the former King of Poland lived, or the Tithes Barn, where the tax was collected from the thirteenth century onwards Must also be included in the course. The ramparts dating from the 13th century and remodeled in the 18th century or the town hall (XVIIIth) will not be forgotten.

Note that the Westercamp museum, devoted to local history (military collections and archaeological elements), housed in an old vineyard house, is closed until further notice due to renovation.

However, it is still necessary to include in the visit to the city center, which was called the Alsatian Venice because of its habitat along the river Lauter, the house known as the Ami Fritz. Dating from 1550, an ancient tannery, its portal and its decors are typical of the Alsatian Renaissance. It was here that the film adapted from the famous novel by Erckmann-Chatrian, which gave the building its name, was shot in 1932.

Finally, without counting many typical houses or the Romanesque church of the old village of Altenstadt, the ultimate must-see is the Geisberg monument on the homonymous hill where the Prussians dominated the French troops on 4 August 1870. One Superb panorama on the city and the vineyard await you there.

It should be noted that historical routes of the city and its immediate surroundings have been designed. Guided tours of the city are also possible, unless you prefer a small tourist train or a rosalie tour. Information and brochures on +33 3 88 94 10 11.

In another area, the astonishing private museum of the Solex bike, which features models of all ages and in working order brought together by a private individual, is worth a visit. Guided tour. Information on +33 3 88 94 18 73.

The city and especially its vast territory (notably its forest, partly protected under Natura 2000) are the object of many excursions. Some of them use part of the GR53 linking the North Sea with the Mediterranean, the old road to Saint-Jacques or the cross-border path of the chapels. Maps and information on +33 3 88 94 10 11.

For cycling and mountain biking enthusiasts, circuits have also been designed, such as the cycle path along the Lauter valley. For further information, please call +33 3 88 94 10 11.

In a different genre, horse racing enthusiasts can go to the Hardt racecourse which regularly hosts meetings with betting. For further information, please call +33 3 88 94 10 11.

Finally, in this rich wine-growing region, discover the vineyards and their nectar (with moderation, of course) seems inescapable. This can be envisaged at the Cellars of Wissembourg. For further information, please call +33 3 88 54 93 80.

In late May or early June, the festivities of Pentecost are undeniable. On the program: folkloric procession, craft market, musical animations and folk dances. Fireworks on Monday evening.

The first fortnight of June, funfair.

The last weekend of June, the Outre Festival which takes place outdoors at the foot of the ramparts essentially programs jazz concerts. For more information, please call +33 3 88 94 11 13.

Throughout the summer, at the level of the ramparts, ambulatory shows (street arts, music, theater).

From mid-August to the beginning of September, the International Music Festival offers a classical program mainly devoted to chamber music and piano. For further information, please call +33 3 88 94 10 11. 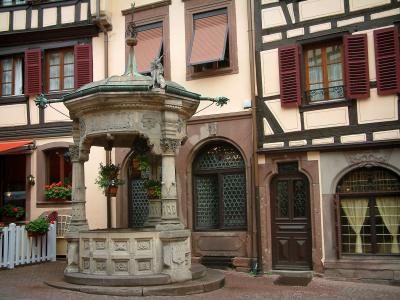 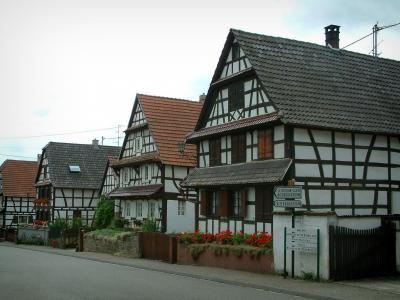 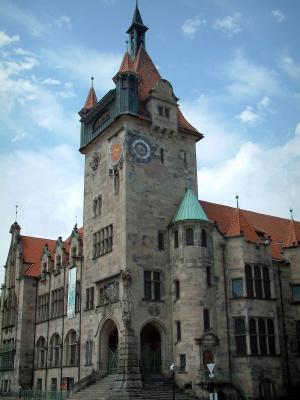 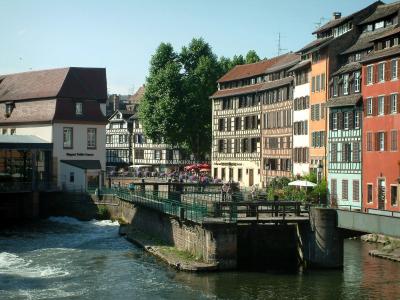 Strasbourg
European city with a rich heritage well-known for its Gothic cathedral and its picturesque district, Petite France 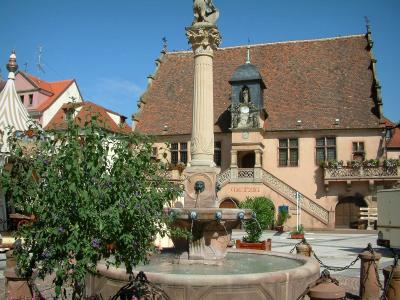 Molsheim
The Jesuits church, the Chartreuse museum, the Metzig... 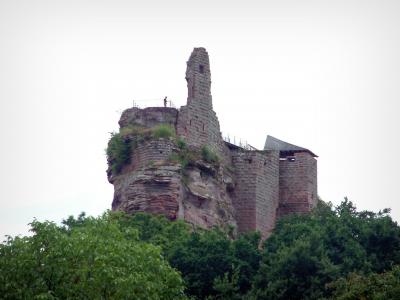 Hostellerie au Cygne
8.9
84
French cuisine restaurant in Wissembourg
48 € per person
Nestled in the historic district of the pretty town of Wissembourg, Hostellerie au Cygne welcomes you in a beautiful house. It is in a winstub style room decor is both rustic and elegant that you can revel. Side buds, the chef concocts delicious…
Located Wissembourg away
Favourite 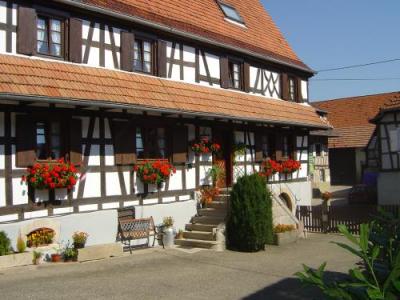 Klein anne
9.4
31
House with 4 bedrooms in Cleebourg
58 € to 60 € per double room
4 bed and breakfast in a half-timbered house in the center of the traditional village and wine.
Located 3.4 mi from Wissembourg
Favourite 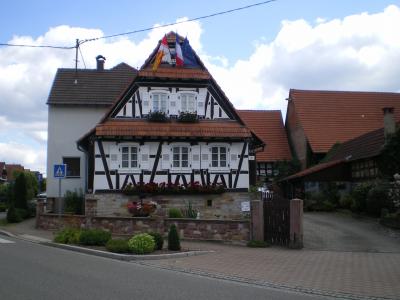 Chambres trog
9.3
16
Farm with 2 bedrooms in Seebach
60 € per double room
In a typical Alsatian town and very ornate, we let 2 bed and breakfast. They each receive private bathrooms. The very hearty breakfasts are served in a dining room reserved for guests. A kitchenette is also available. Shops on site. Our beautiful…
Located 4.7 mi from Wissembourg
Favourite 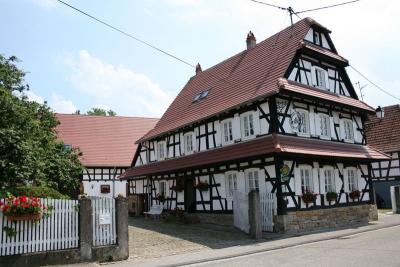 Maison Ungerer
9.8
3
House with 3 bedrooms in Hunspach
69 € per double room
The House of the cottages Ungerer offers you holidays of an original style. This old farmhouse renovated according to criteria of demanding comfort, offers to the occupants of its 5 lodgings of France and 3 rooms of hosts calm and rest, of course…
Located 5.8 mi from Wissembourg
Favourite
All bed & breakfasts around Wissembourg 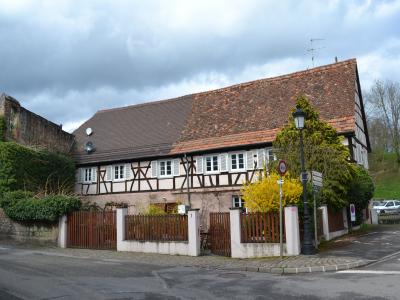 Pfister mill
Mill for 18 people in Wissembourg
380 m², 7 bedrooms
2400 € per week
Who knows Wissembourg, also knows the former mill Pfister. Located in the heart of the picturesque town, close to the Lauter and ramparts, the mill already hit by the wall that the crosses. The half-timbered building enchants with its exceptional…
Located Wissembourg away
Favourite 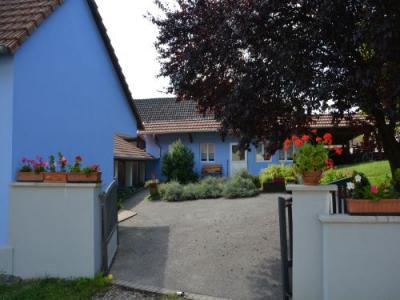 Gîte La Grange d'aloyse
9.8
17
House for 5 people in Oberroedern
85 m², 2 bedrooms
380 € to 415 € per week
In a quiet village in northern Alsace, the cottage near the church, has a separate entrance, private terrace and over. One floor and the ground floor, can accommodate 5 people and is labeled Gite de France 3 ears. It has all the necessary comfort,…
Located 8.1 mi from Wissembourg
Favourite 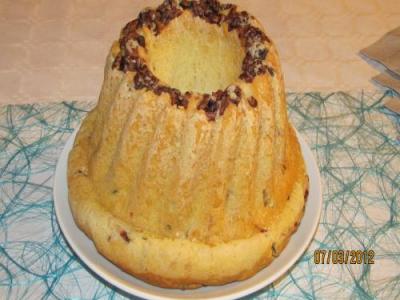 Gîte s'Kamerlè
9.0
7
Apartment for 4 people in Hatten
50 m², 2 bedrooms
270 € to 320 € per week
The cottage is located on the floor, adjoining the owner's house, with a separate entrance. The living room / kitchen is equipped with an oven, a microwave, a washing machine, two electric hobs, a French television and parable that all kitchen…
Located 9.5 mi from Wissembourg
Favourite
All vacation rentals around Wissembourg 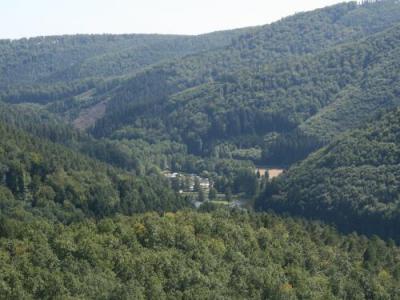 Camping du Fleckenstein
9.1
151
Campsite in Lembach
100 pitches on 1.7ha
1530 € per day (2 pers / tent / car)
Located in the middle of the regional Natural reserve of the Vosges of North, the camp-site accomodates you for a pleasant stay cultural and resting. The feet in water, near the traditional village of Lembach, of the castle of Fleckenstein and…
Located 8 mi from Wissembourg
Favourite 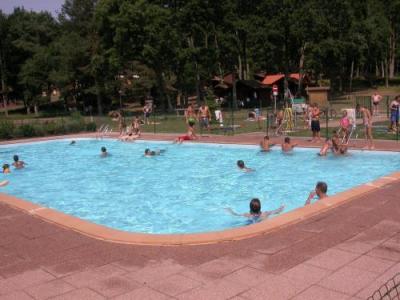 Ramstein-Plage
8.8
42
Campsite in Baerenthal
360 pitches on 14ha
1780 € per day (2 pers / tent / car)
Conveniently located in the valley Zinsel inside the Natural Park of Vosges du Nord, the campsite benefits from an exceptional environment. Surrounded by woods and a pond, hikers and swimming find happiness as the anglers with a second remote…
Located 19.8 mi from Wissembourg
Favourite
All campsites around Wissembourg 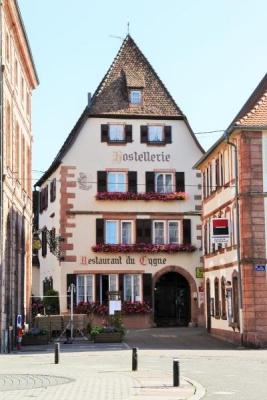 Hostellerie au Cygne
8.7
189
Hotel in Wissembourg
Room from 90 €
Located in Wissembourg, 2 kilometres from the German border, this hotel features en suite rooms with free Wi-Fi, a traditional restaurant and a leisure room with books and board games. The Tourist Office is 60 metres away. Provided with a telephone…
Located Wissembourg away
Favourite Hôtel d'Alsace
8.1
553
Hotel in Wissembourg
Room from 59 €
Ideally located near the German border, Hôtel d’Alsace features plain and cosy accommodation in the picturesque Alsace region. All air-conditioned rooms feature a flat-screen TV with satellite channels and a private bathroom with free toiletries.…
Located Wissembourg away
Favourite
All hotels around Wissembourg