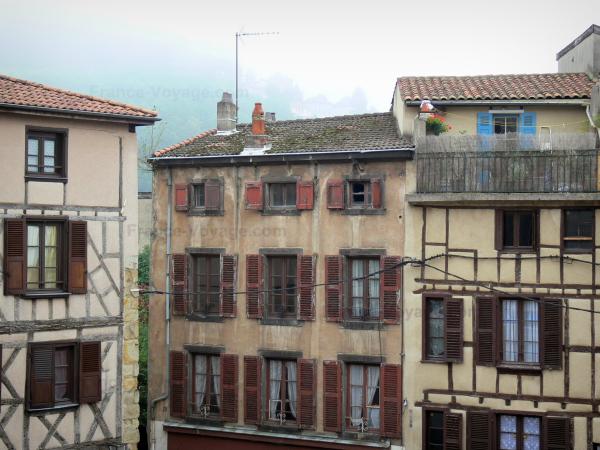 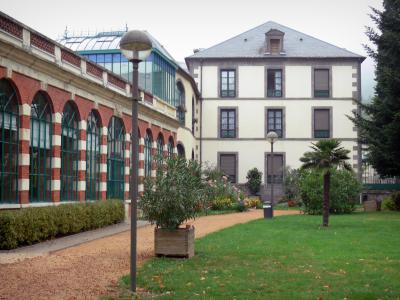 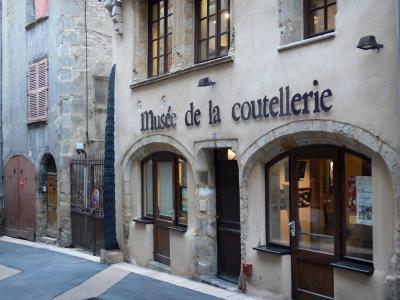 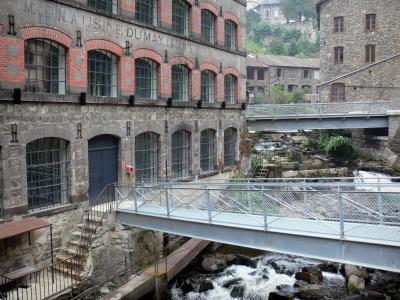 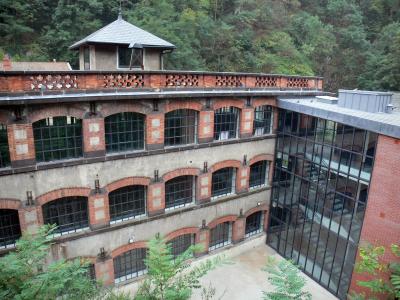 Thiers, the French cutlery capital, has preserved much heritage connected to this traditional industry. The Factory Valley (Vallée des Usines), located below the medieval quarter, was a key cutlery production centre from the 14th to 20th centuries and is now a particularly mysterious site with a string of industrial building remains situated along the turbulent Durolle river. Some previously disused ones have now been renovated, like the Creux de l'Enfer, a former cutlery works that is now a contemporary art centre, and L'Usine de May, today home to the industrial history museum (Maison de l'Aventure Industrielle).

Those keen on walking should not miss a stroll around the narrow sloping streets of the old town above Thiers where timber-framed and corbelled façades adorn the typical old houses. Particularly fine examples are the Hôtel du Pirou, with its mullioned windows and half-timbering, and the Maison de l'Homme des Bois, which features a picturesque carved statue.

Every visit to Thiers must of course include a trip to the Cutlery museum (Musée de la Coutellerie), a very interesting place that traces the history of cutlery-making in Thiers and puts on workshop demonstrations of this wonderful skill.

Cutlery fans should also make a point of visiting the art knife festival (Festival du Couteau d'Art), which takes place here every year in May.

Capital of French cutlery, Thiers is a commune of Auvergne-Rhône-Alpes located in the department of Puy-de-Dôme. Located in the heart of the Regional Natural Park of Livradois-Forez, it takes place on the foothills of the Black Forest and the Monts du Forez, about forty kilometers from Clermont-Ferrand and Ambert.

Populated since the Gallo-Roman period, the city of Thiers would be, according to historians, of Celtic origin. Former barony of the county of Auvergne in the Middle Ages, it was then a high place of exchange and commerce. The town experienced a major economic boom after the Second World War, attracting at the time by the cutlery of thousands of workers and new inhabitants.

Today, the commune awarded two flowers in the contest of towns and villages in France continues to attract many visitors attracted by its history and its rich architectural heritage protected in the city center.

Built between the 11th and 12th centuries, the Saint-Genès church was remodeled several times between the 13th and 19th centuries. Romanesque style, it takes place on the remains of an old building of the sixth century. Listed as a historic monument, it is mainly built in arkose and the octagonal dome of the transept crossing is the largest in Auvergne. Inside, you can admire beautiful murals, and an altarpiece of the late seventeenth century offered by the brotherhood of cutlery Thiers.

Near the castrum of origin, the Saint-Symphorien church still stands proudly in the city. Rebuilt between the 10th and the 11th century, it depended at the time on the neighboring Benedictine abbey. Remodeled in the nineteenth century, it allows however to admire the ruins of the old apse. You can see some beautiful elements of Romanesque style, as well as a beautiful set of capitals carved with various motifs. There are also some remains of the Abbey of Moutier built in the second half of the eighth century, as the abbey home with its towers encircling the door of the fifteenth century.

Listed in the Historical Monuments, the church Saint-Jean gave its name to the neighborhood which borders it. Closed to the public, it reveals a beautiful Romanesque architecture of the fifteenth century. Next door, the cemetery offers a beautiful view of the valley and the bottom of the city of Thiers, and reveals very old funerary constructions.

The ancient and medieval center of Thiers is full of beautiful houses to be discovered, such as the Pirou Castle, the most emblematic building in the city. Listed as an historic monument, it was built at the beginning of the 15th century by Louis II of Bourbon and still reveals its beautiful wooden sides. Do not miss the House of the Seven Deadly Sins and its sculptures, the 12th and 14th of the Rue de la Coutellerie listed as Historical Monuments, or the Pedde du Coin des Hasards. This medieval covered passage was installed in the 15th century. The town of Thiers is full of old half-timbered houses and carved facades that will catch your attention all along your walk.

One can still admire some vestiges of the old fortifications, as well as several old bridges.

The industrial heritage is still present in the municipality of Thiers, especially with the presence of the museum of cutlery. Opened in the early 1980s, it is housed in three buildings in the city center, offering collections on the history of cutlery, or demonstrations of artisan knives.

Near the Saint-Roch bridge, you will see the oldest Thiers knife factory still in operation. A contemporary art center takes place right next door.

Green city, Thiers has several parks and other squares and offers its visitors various hiking trails to discover the local flora and fauna, as well as the most beautiful monuments of the town. Let yourself be tempted by the Margerides, a set of rocks forming several cliffs, the valley of Rouets or the banks of Thiers.

The Thiers market is held on Wednesdays, Thursdays and Saturdays. A lively Christmas market takes place in December.

The world's largest art knife festival, Coutellia takes place each spring and features demonstrations and introductions to the making.

The 13 km Thiernois are a pedestrian race organized every year at the beginning of June.

The Pamparina takes place the first weekend of July. This music festival changes themes every year and invades the streets of the city for a very festive atmosphere.

Fireworks are organized for the National Day on July 14th.

Every second weekend of September, the fair at Pré is an opportunity to discover ancient traditions, demonstrations of ancient crafts or different animations.

Every first Saturday of December at midnight, the Roanne-Thiers is born, according to tradition, from a bet between friends in the early 1920s. 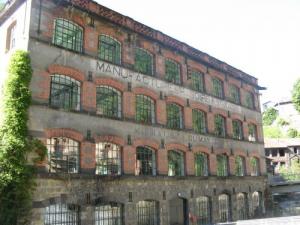 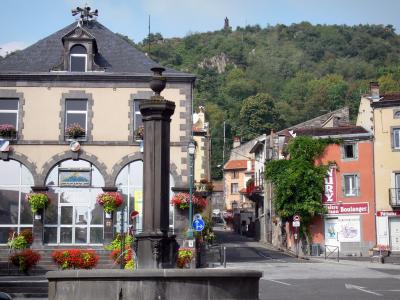 Volvic
Town of stone and water 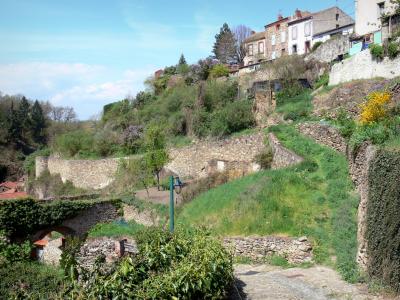 Auzon
A charming medieval village renowned for its Romanesque church 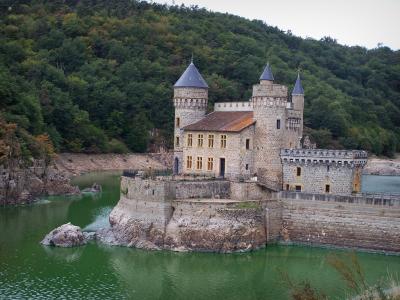 The La Roche castle
This building is particularly photogenic 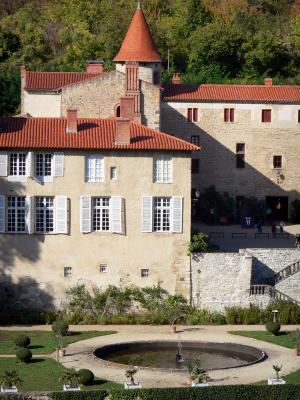 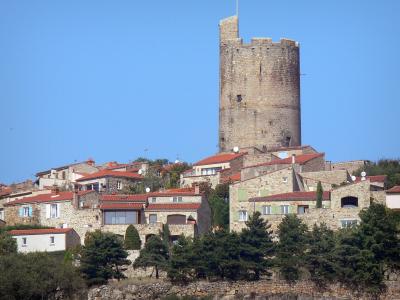 Montpeyroux
A charming village towered over by its keep 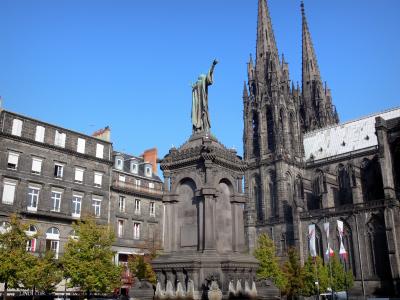 Clermont-Ferrand
Capital of the Auvergne region Le Chaudron
9.1
188
Auvergnat restaurant in Thiers
40 € per person
Located in the French capital of cutlery, the restaurant Le Chaudron welcomes you in a friendly and cozy atmosphere. The place is an old building, with exposed beams and stonework. In this charming rustic decor and sip a local generous and…
Located Thiers away
Favourite Campanile Thiers
French cuisine restaurant in Thiers
24 € per person
DECO MODE - Just minutes from downtown Thiers, Campanile restaurant awaits you for a moment greedy in a designer universe and comfortable while red and white. Furniture and stylish lounge spirit, warm and sunny terrace: that's what make a meal…
Located Thiers away
Favourite
All restaurants around Thiers 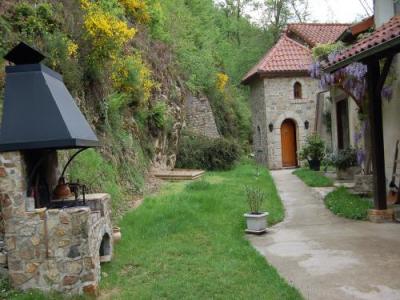 Moulin de la Planche Ferrand
9.6
26
House with 3 bedrooms in Puy-Guillaume
88 € per double room
In the gorges of the Credogne green and wild in the heart of Park Livradois this old water mill fully restored will be a delightful place for you away from everyday stress, ideal for rest and relaxation in isolated heart of the property. Without…
Located 9.3 km from Thiers
Favourite 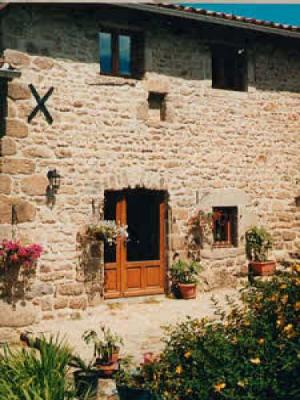 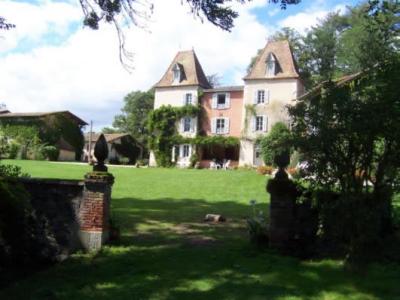 Large family home for up to 21 people
NEW
House for 21 people in Escoutoux
400 m², 10 bedrooms
1450 € to 1550 € per week
Auvergne large family home 21 people, ideal for stays and weekends with family or friends. At your disposal outside park arranged with 2 large walkways, 7X5 above ground pool, barbecue, ping pong, bikes,... Inside large dining room, kitchen…
Located 6.4 km from Thiers
Favourite 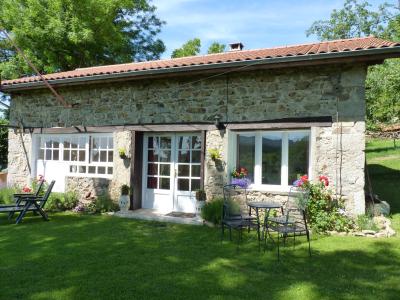 La maison de réflexion
10
6
House for 3 people in Saint-Victor-Montvianeix
56 m², 2 bedrooms
400 € to 600 € per week
The day of your arrival, we offer you a meal and a welcome gift in which you find necessary to start your holiday, all included in the proposed tariffs. Slow down time to stay in this very comfortable cottage, independent and well equipped located…
Located 11.1 km from Thiers
Favourite 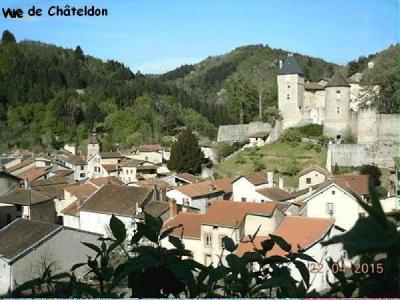 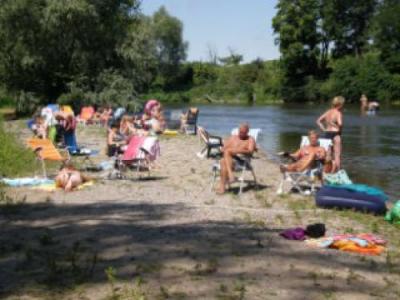 Camping les Ombrages
9.0
11
Campsite in Mur-sur-Allier
90 pitches on 4ha
1450 € to 2150 € per day (2 pers / tent / car)
In a idyllic vallee Along the river Allier. You will find our comfortable family campsite (dutch owners) - Here we may well go for walks, fishing, and make family a quiet canoe trip. The calm, quiet, family atmosphere make this site a beutifull…
Located 25 km from Thiers
Favourite
All campsites around Thiers L'Aigle d'Or
7.5
331
Hotel in Thiers
Room from 56 €
L’Aigle d’Or hotel is situated in the heights of the medieval town of Thiers in the Auvergne region. It offers rooms with free Wi-Fi access and features a traditional décor in the style of the 19th century. Each room is also equipped with a…
Located Thiers away
Favourite 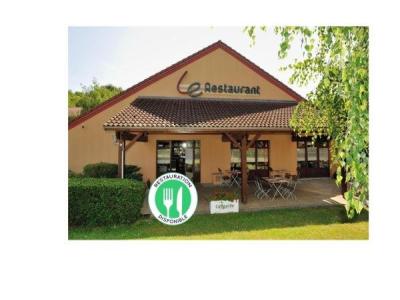 Campanile Clermont-Ferrand ~ Thiers
7.0
1165
Hotel in Thiers
Room from 49 €
This friendly hotel is situated about 4 km west of Thiers, with easy access to the E70/A72 motorway that leads to the city of Clermont Ferrand, about 40 km away. Campanile Clermont-Ferrand ~ Thiers offers affordable accommodation in a very convenient…
Located Thiers away
Favourite 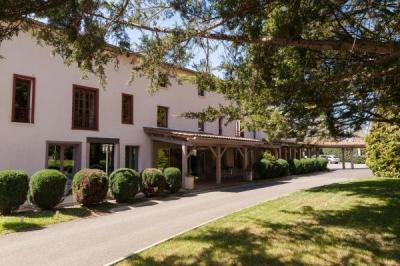 Clos St Eloi, The Originals Relais (Relais du Silence)
8.2
539
Hotel in Thiers
Room from 111 €
Clos Saint Eloi, The Originals Relais is located in Thiers, 2 km from exit 29 on the A89 motorway. The property offers free WiFi throughout and features an on-site restaurant and a bar. Guests can enjoy a tree-lined park and outdoor musical…
Located Thiers away
Favourite
All hotels around Thiers