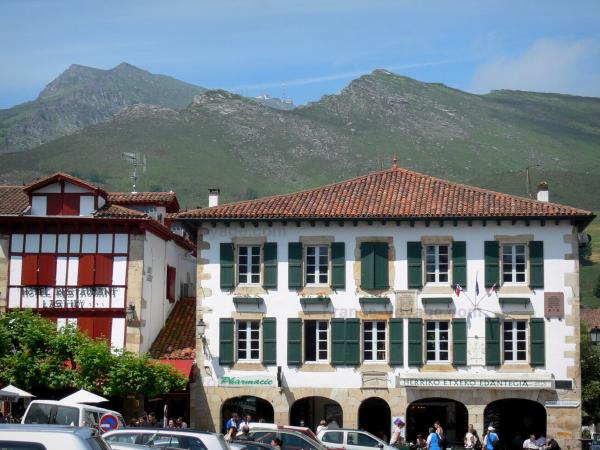 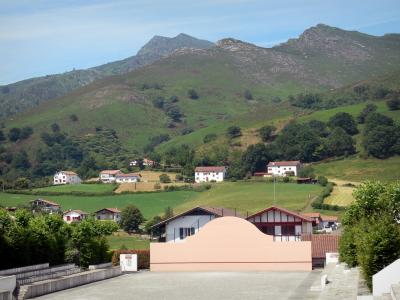 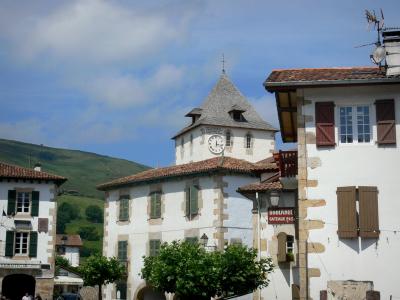 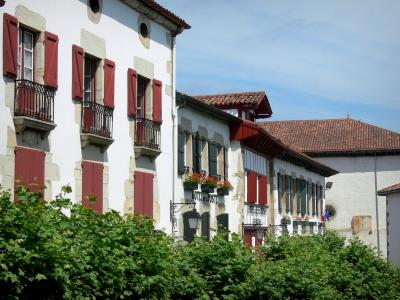 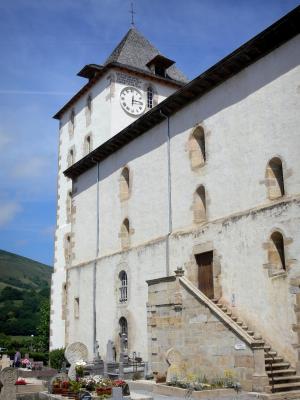 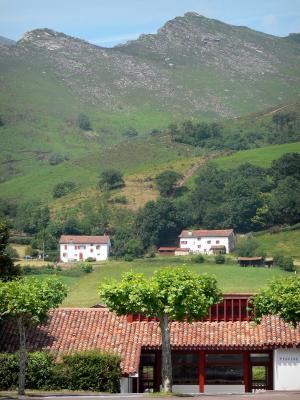 At the base of the Rhune massif in the Basque Country, be sure to make a stop in the beautiful village of Sare. Its traditional houses, pelota court, majestic church of St Martin with three floors of oak galleries and unspoilt environment are all attractions that add to the charm of the area.

Open to the public, the picturesque 17th-century Ortillopitz House invites you to discover Basque life in the past, with a tour of the cider cellar, the large kitchen, the office/reception room of the ship-owner, the bedrooms and the attic, as well as the orchard and traditional vegetable garden.

Sare is a village of the Pyrenees-Atlantiques, in region New-Aquitaine.

In the heart of the Basque country, the village is backed by the Pyrenees mountains: with an area of ​​some 50 km², the commune shares 25 km of border with Spain, where it is half landlocked. Higher peaks at more than 800 meters, as against 25 for the lowest.

As for the sea (the Atlantic Ocean), it is only about fifteen kilometers (Saint-Jean de Luz).

A member of the Association of the Most Beautiful Villages of France, Sare has a little more than 2500 inhabitants and its activity has long been linked to pastoral agriculture (breeding on mountain pastures). A mine was also exploited since the Middle Ages because of the geological character of the subsoil, where caves were uncovered.

More recently, a wool processing unit has been implanted.

However, if the past was sometimes tragic (deportation of inhabitants under the Revolution suspected of maintaining links with the frontier Navarrese and then enemy breakthrough led by the English during the Spanish War of Independence), Sare is now a locality prized for Its natural and built heritage, which makes it a tourist stop of choice.

Outside the village that Napoleon III and Edouard VII liked to frequent and that the novelist Pierre Loti took as his model in "Ramuntcho", a discovery of the mountains that dominate it imposes itself. You can start by the Rhune, which culminates at 905 m, and which offers a remarkable panorama on the coasts. On foot, it takes at least two hours...

Less elevated, the pass of Lizarrieta (441 m) is famous for its fauna (goshawk) and its forest (oaks). Avoid during hunting (October and November).

Finally, the site of Lezeko Gaina, refuge of many protected species, alternates crests and valleys.

This mountain set is obviously conducive to hiking (on foot, horseback or even mountain biking), and many itineraries have been laid out. All information is available at +33 5 59 54 20 14.

In the village, where some houses date from the 15th century, in addition to the numerous bridges, washhouses and oratories, one will linger at the Saint-Martin church, enlarged and enhanced in the 17th century, with a five-story tower. Inside, three floors of carved oak galleries and their turned wooden balusters retain attention. The bell tower, destroyed by a fire, was recently rebuilt and can be visited every Monday in the summer at 11 am. A history of the village is proposed on this occasion.

Away from the town, the Sainte-Catherine chapel was rebuilt in the 17th century on the basis of an older building (15th century). It also has wooden floors. It is open only for the Feast of St. Catherine in late November.

Besides the pediment near the church, several times restored, which allows the practice of the Basque pelota, a visit of the village is also the opportunity to admire many lintels carved on the facades (including the engraved date of the construction of The private dwelling or the building).

Note also that a detailed guided tour of the village is possible, with the program evoking the smuggling traffic of yesteryear and the visit of the farm to the frescoes, decorated in 1936 by refugees fleeing the Francoism.

The Ortillopitz house, a typical 17th century Basque dwelling, and the prehistoric caves (except in January) with paths in the form of sound and light, evoking the human evolution from the site adjacent to the site prehistory. Information on +33 5 59 54 20 14.

In different registers, the animal park Etxola (buffalos, dromedaries, llamas... which can be approached as a family), open from 1 April to 31 October (prices: 5 euros and 4 euros for children) Museum of the Basque cake (which offers workshops and pastry courses) are also interesting.

In August, over five days (around the Assumption, August 15th), the Sare festivals offer traditional concerts and animations (Basque pelota, folk parades, but also the Ahate Jokoa ritual, during which riders Duck on a hanging duck...).

In April, Sare hosts a festival of writers from the Basque Country.

Finally, in this rich land, gourmets and gourmands will not miss the market of producers which takes place on Fridays from 4:30 pm to 8:30 pm from May to October and Saturdays from 9 am to 1 pm from November to April. Sheep cheese, goat cheese, yogurts, vegetables, salted meats, pork, veal, beef, lamb, Espelette chili, jams... In summer, local artisans also offer their produce. 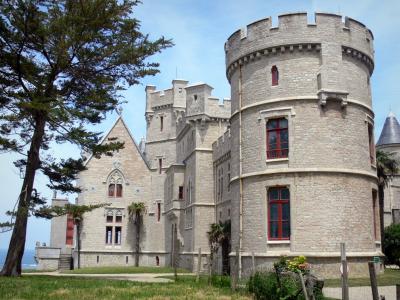 Observatory Castle of Abbadia
This Neo-Gothic house built by the famous architect Viollet-le-Duc, stands on a promontory on the Basque Corniche 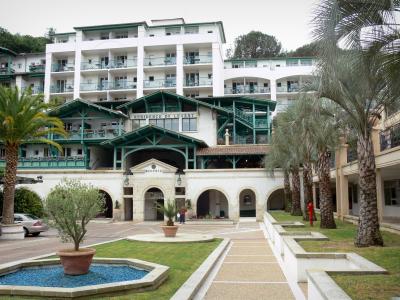 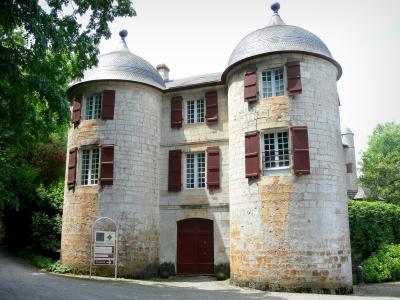 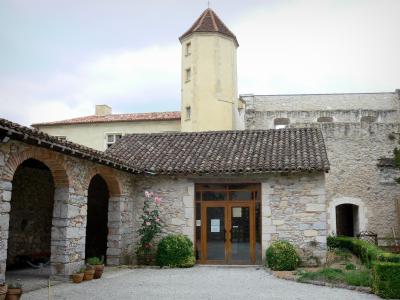 Sorde-l'Abbaye
Discover the remains of the former monastery on the bank of the Gave d' Oloron river! 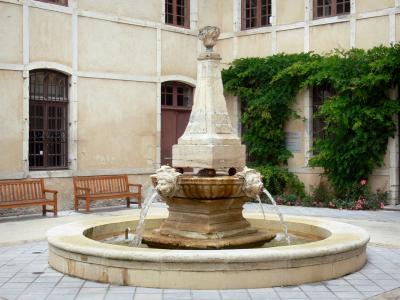 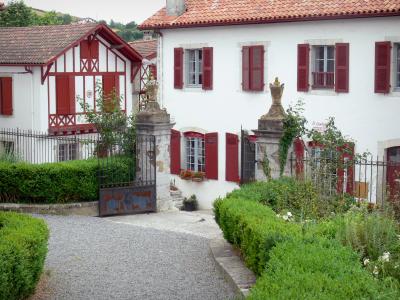 L'Auberge Basque
9.4
308
French cuisine restaurant in Saint-Pée-sur-Nivelle
77 € per person
The contemporary inn rests on two essential values: simplicity and elegance of the offering tasty moments of life and sincere, and where we find the real "welfare". The table of Auberge Basque: a refined decoration in transparency giving…
Located 3.4 mi from Sare
Favourite
All restaurants around Sare Maison Elgartea
9.6
58
House with 5 bedrooms in Sare
85 € per double room
Enjoy well-being in the Basque country. Located at the entrance of sare one of the most beautiful villages in France, Elgartea house offers a park overlooking the mountains. This vast traditional basque home has five large rooms for you, including…
Located Sare away
Favourite 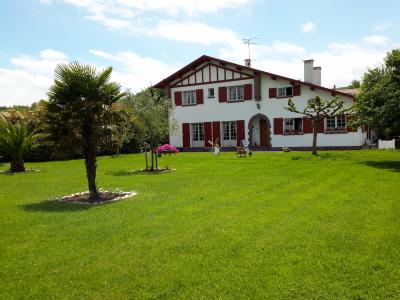 House sorro chokoa
9.7
4
House with 5 bedrooms in Saint-Pée-sur-Nivelle
49 € to 75 € per double room
The Maison sorro chokoa is ideally located to discover the Basque Country : near Saint Jean de Luz, Biarritz, Espelette and halfway between Saint Sébastien and Saint Jean Pied de Port, you will enjoy both the ocean and the Mountain. It is with…
Located 3.1 mi from Sare
Favourite 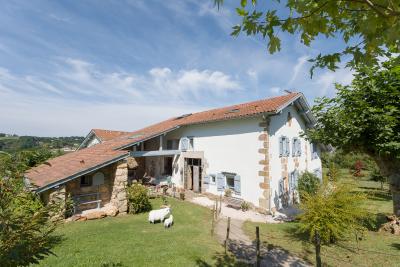 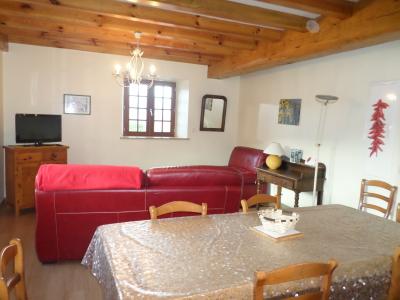 Apartment on the farm
Apartment for 4 people in Ainhoa
70 m², 2 bedrooms
270 € to 430 € per week
3 stars prefectural recent ranking 1st floor apartment in the owner's house with 2 bedrooms 1 kitchen living 1 storeroom bathroom and toilet - Located in a renovated farm and business - 1 km from the town of Ainhoa ​​classified - 1 km from Spain…
Located 4.1 mi from Sare
Favourite Apartment Village classified ainhoa
9.8
4
Apartment for 7 people in Ainhoa
80 m², 3 bedrooms
230 € to 650 € per week
F4 80m² apartment overlooking the village and the mountains of the Pyrenees, Spanish.
Located 4.4 mi from Sare
Favourite Steffen Heckmann
NEW
Apartment for 5 people in Urrugne
65 m², 2 bedrooms
550 € to 990 € per week
This very nice and comfortable apartment was in former days the barn of the farm house. You will find plenty of information in our site baskeneisen and you can download a travel guide of the near region. The access of the apartment is via a…
Located 4.8 mi from Sare
Favourite
All vacation rentals around Sare 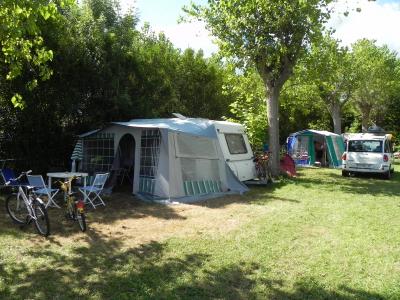 Camping ibarron
8.8
1
Campsite in Saint-Pée-sur-Nivelle
142 pitches on 0ha
14 € to 2560 € per day (2 pers / tent / car)
In the Basque Country between sea and mountains camping Ibarron in Saint Pée sur Nivelle is an ideal holiday spot for discovering our beautiful region and for nature lovers. Our family campsite is without activities to enjoy the quiet after…
Located 3.3 mi from Sare
Favourite Camping manex
Campsite in Saint-Pée-sur-Nivelle
30 pitches on 1ha
10 € to 1450 € per day (2 pers / tent / car)
Camping Manex is ideal to discover the French Basque country 2 km from the beach, recharge batteries in a quiet nature place, looking forward to welcoming you
Located 4.1 mi from Sare
Favourite Camping Mendi Azpian
NEW
Campsite in Urrugne
118 pitches on 3.5ha
14 € to 27 € per day (2 pers / tent / car)
Family camping at the foot of the mountain at 6 km from the beach and Spain.
Located 5.6 mi from Sare
Favourite
All campsites around Sare Hôtel Lastiry
8.9
263
Hotel in Sare
Room from 45 €
The Lastiry Hotel is situated on the place of the village of Sare, classified one of the most beautiful villages of France, in the heart of the French Basque country. The hotel is housed in a 17th century house and offers air-conditioned rooms…
Located Sare away
Favourite 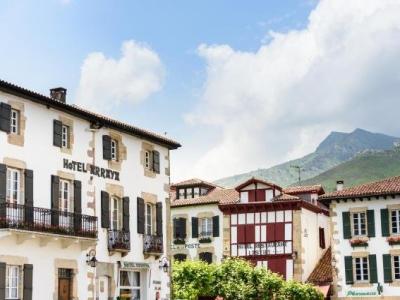 Arraya - Les Collectionneurs
9.2
111
Hotel in Sare
Room from 116 €
This hotel is located on the village square in Sare, 16 km from Saint-Jean-de-Luz and its beaches. It offers rooms distributed between 3 traditional 16th-century houses and free Wi-Fi. Each guest room at the Arraya is individually decorated…
Located Sare away
Favourite 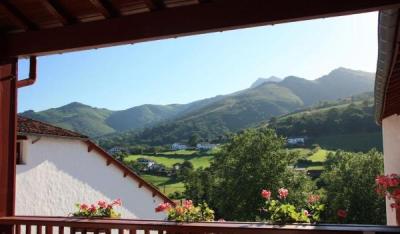