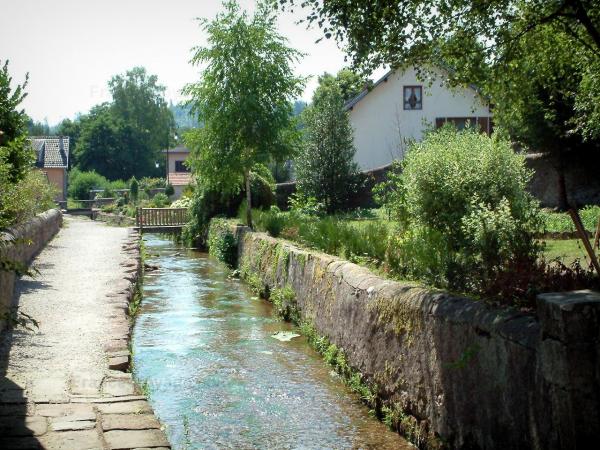 A pilgrimage village, Saint-Quirin in Moselle developed around a priory which was once owned by Marmoutier Abbey, some forty kilometres away.

Saint-Quirin, surrounded by the Vosges hills, has earned the Most Beautiful Village in France label, with its idyllic environment and fountains, including a miraculous spring said to have healing powers.

This peaceful, pretty village surrounded by greenery has a historic heritage that dates back to the Gallo-Roman era, as evidenced by the archaeological site of La Croix Guillaume in the forest, a genuine hamlet from that period. There the public can see traces of housing, economic activities and worship on display.

Its little cobbled streets lead to its priory church, with three onion-shaped steeples that were originally built in the 13th century. It was rebuilt in the Baroque and 18th-century styles. This very original church has two square towers where the bells are kept, connected to each other by a footbridge.

With its 75 certified or listed buildings, houses and farms, religious monuments and chapels, Saint-Quirin is un unmissable attraction that you can explore with an audioguide, available at the Tourist Office.

Geography: Located on the borders of the departments of Moselle, Meurthe-et-Moselle, Vosges and the Lower Rhine, the town of Saint-Quirin, with its hamlet of Lettenbach, is the largest department. Parish Saint-Quirin, the "great parish," covers four communes: Saint-Quirin, Métairies-Saint-Quirin, and Turquestein Vasperviller.

The historical roots: At later times, Gauls, Celts and Romans lived in this place, protected by the Donon mountain dedicated to the mythological gods. Saint-Quirin is named Quirinus, military tribune of Rome, martyred in 132 under Emperor Hadrian. Its precious relics, made in 1050 by Geppa, sister of Pope Leo IX Alsace-Lorraine, are preserved in the priory church. In 1123 was consecrated by Cardinal Cunon, papal legate, and by the Bishop of Metz, the Stephen Cardinal Bar, the new Romanesque church adjoining the priory. From the fifteenth century, the abbey of Marmoutier (Alsace) owner of these lands, decided to establish a glass industry in the hamlet of Lettenbach. Louis XV granted to this flourishing manufactures the privilege of wearing the title of "Manufacture Royale" in recognition of the quality of its products which rivaled those imported from Bohemia. This glass disappears in 1844; the remaining buildings are occupied by a "House Children's Specialized."

Looking through Saint-Quirin, you will be surprised by his priory church dating from 1722, topped by three towers, two onions triple bulb, which has a silhouette and features a typically baroque masterpiece unique historical monument: the organ factor of the famous Jean-André Silbermann (1746). Since its restoration in 1969, the "Friends of Silbermann Organs" Marmoutier Saint-Quirin and organize every year in the music days during the months of July and August. Bypassing the priory, the present parsonage, you will find below "the miraculous fountain" that heals "scrofula" (skin diseases). Each year, during five processions, the relics of St. Quirin are brought to the priory church at the Upper Chapel, a 12th century Romanesque building located on the plateau overlooking the village. Many faithful follow the pilgrimage of Ascension Day and participate that day in a fair attested from 1471 in the bustling streets of the village. The chapel of glassmakers, lovely rococo building, built in 1756 to Lettenbach, has a remarkable onion dome and a set of stained glass folk art. The beauty of the surrounding nature, the treasures locked in his church, its long history, many legends and its source "miraculous" Saint-Quirin make a place of pilgrimage and tourism.

To attract tourists, Saint-Quirin, ranked among the "Most Beautiful Villages of France", "Green Station Vacation", "Marianne d'Or" in 1984, did much to offer. Its environment favors relaxation: the trails of the local Vosges Club, biking and equestrian trails attract walkers or hiking. The vast forest estate lends itself to observation of big game hunters or pleasure; food lovers in search of berries and other delicious wild berries; mycologists make their paradise. It is also possible to fish in the pond.

Located on Forest Road Four Roads, at a place called "William Cross", extends an archaeological site, witness to a civilization from the 1st to the 3rd century. 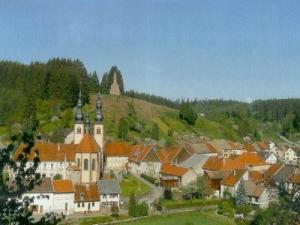 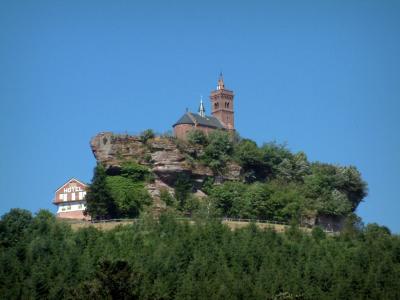 The Rock of Dabo
Superb views from the top of this pink sandstone rock! 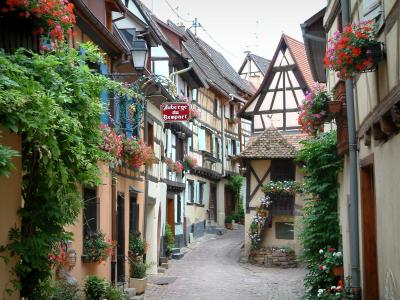 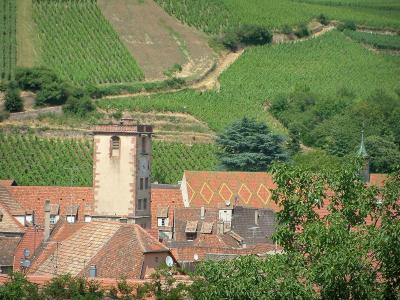 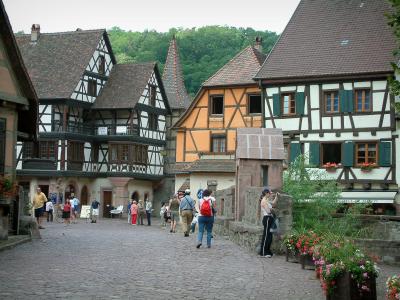 Kaysersberg
A magnificent village along the Wine Trail 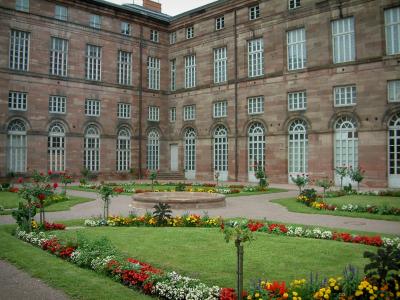 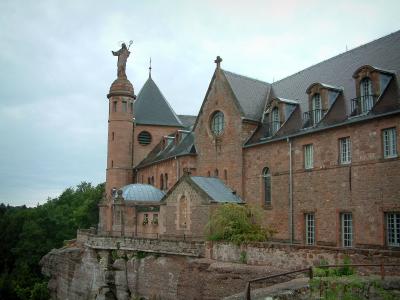 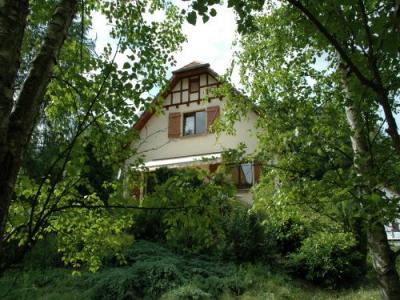 Chambres d'hôtes du Chant des Sources
9.8
13
House with 2 bedrooms in Wangenbourg-Engenthal
49 € to 63 € per double room
Nearby Strasbourg and the Alsace Wine Route. The guest house Chant des Sources is a new traditional house warmly decorated with local materials, especially wood immense surrounding forests. It has a large garden with a gazebo beside the stream.…
Located 11.1 mi from Saint-Quirin
Favourite 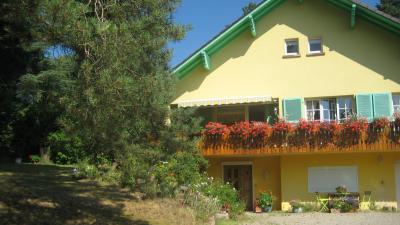 Colette
9.9
7
House with 2 bedrooms in Lutzelhouse
55 € per double room
Chalet-style house located near the forest with numerous walks depart in a very quiet place. Very comfortable room with shower, WC, nearby. Hearty breakfast served in the lounge or on the terrace in summer. Lutzelhouse is a charming village…
Located 11.5 mi from Saint-Quirin
Favourite The cottage
10
4
House with 2 bedrooms in Moussey
85 € to 105 € per double room
At the heart of the country Ponds, near the Canal de la Marne to the Rhine in a quiet and relaxing, Isabelle and Claude welcome you to the cottage, in Moussey Battaville, 200 m bike paths (bicycle storage) to 15 km Animal Park of Holy Cross…
Located 13.6 mi from Saint-Quirin
Favourite
All bed & breakfasts around Saint-Quirin 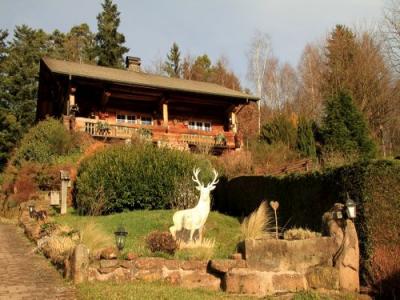 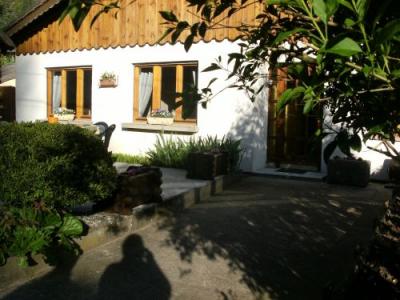 Squirrels
9.7
25
House for 6 people in Abreschviller
75 m², 2 bedrooms
250 € to 300 € per week
- Cottage for 4/6 people. Ground floor apartment with separate entrance, adjoining the owner's house, located in a valley at the foot of the Donon, quiet and relaxing, near the forest and numerous hiking trails, ideal for holidays or weekends.
Located 2.7 mi from Saint-Quirin
Favourite 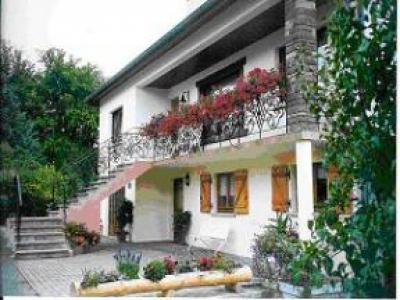 Mon gite
9.3
6
Apartment for 4 people in Niderviller
68 m², 2 bedrooms
280 € to 960 € per week
Rural Cottage, standing in a flower, calm and accueillant. Situé to Orés timber forest path strewn with giving a foretaste of the Vosges forest, invites you to escape, wonder and poetry.
Located 7 mi from Saint-Quirin
Favourite
All vacation rentals around Saint-Quirin Alsace camping
9.3
9
Campsite in Gresswiller
20 pitches on 2ha
Located on the edge of the forest, the site has a reputation as a quiet ground in friendly touch and well maintained facilities.
Located 15.8 mi from Saint-Quirin
Favourite

Les Cigognes
8.8
164
Hotel in Abreschviller
Room from 75 €
Located in Abreschviller, just 500 metres from the tourist train's station, Les Cigognes offers a garden, and guests are invited to relax by the heated, indoor swimming pool or on the furnished terrace with a drink from the bar. All of the rooms…
Located 2.3 mi from Saint-Quirin
Favourite 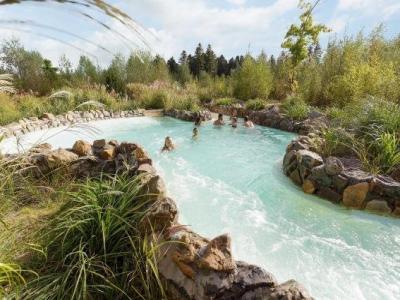