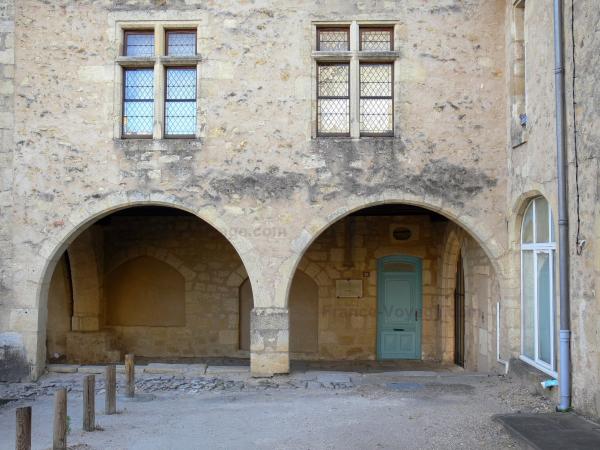 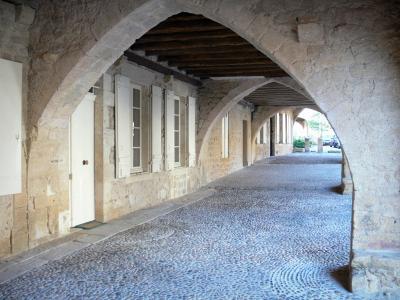 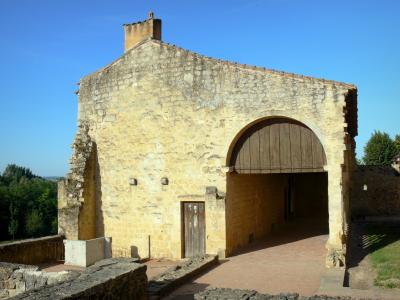 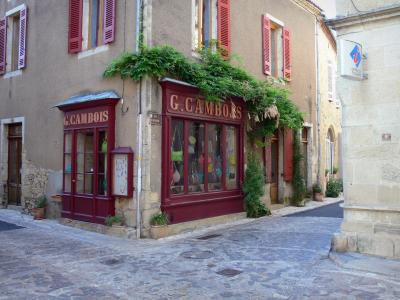 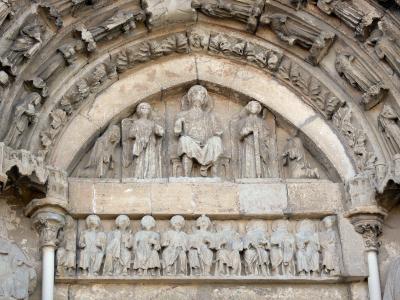 Saint-Macaire, Gironde, is a must for anyone looking to enjoy a place steeped in heritage. Indeed, this charming medieval town has narrow streets dotted with beautiful old houses. Remarkably, its arcaded square, named Place du Mercadiou, is surrounded by medieval houses with twin bay windows and Renaissance homes adorned with mullioned windows. A delightfully picturesque place that deserves some attention for a moment, if only to admire the magnificent façade of the former Henry IV coaching inn!

While the City of Saint-Macaire is particularly known for its Place du Mercadiou, it is also known for its Church of St. Saviour and St. Martin, which has beautiful murals within its walls! Dating back to the medieval period, specifically the 14th and 15th centuries, these adorn the vaults of the choir and illustrate the Apocalypse and the life of St. John. Right next to the church stands the former Benedictine priory of St. Saviour, of which the south wing and its Romanesque cloister colonnade remain.

Medieval city of Gironde, Saint-Macaire is located on the right bank of the Garonne, about fifty kilometers from Bordeaux, at the end of Bordelais. The site was registered in the mid-1960s and the town is mainly made up of vineyards.

The commune of Saint-Macaire takes place on a rocky promontory overlooking the plain, about thirty meters. Today it consists of the old town, very touristy, and the new city. Rich in entertainment, the city of Saint-Macaire is also in historical and architectural heritage in excellent condition. The Middle Ages is the place of honor in this city with typical Bordeaux architecture.

Lovers of fine wines will also appreciate to discover the cellars and other places of tasting of the best vintages of the Bordeaux region. Gastronomy is also in the spotlight in this region of good food. 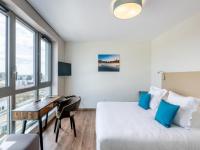 All Suites Bordeaux Marne – Gare Saint-Jean
Set in Bordeaux, 1 km from Saint-Michel Basilica, All Suites Appart Hotel Bordeaux Marne features accommodation with a kitchenette. A sauna and a fitness centre are offered on site and free WiFi is available throughout…
More information

All Suites Bordeaux Marne – Gare Saint-Jean
Set in Bordeaux, 1 km from Saint-Michel Basilica, All Suites Appart Hotel Bordeaux Marne features accommodation with a kitchenette. A sauna and a fitness centre are offered on site and free WiFi is available throughout…
More information

Saint-Macaire is a major tourist town, thanks to its medieval old town and its many old buildings.

Built between the twelfth and seventeenth century, St. Saviour and St. Martin's Church is an old priory of Romanesque and Gothic style. It was built on the site of the old chapel of St. Lawrence, Limestone. including One can discover a carved wooden gate of the thirteenth century and beautiful murals of the fourteenth and fifteenth centuries.

Remains of the Benedictine priory, the Saint-Sauveur cloister was built between the twelfth and fifteenth centuries. Limestone, it is the only remains of the building. It is supported on the wall at the edge of the rock and was built on the remains of a Gallo-Roman settlement.

In the old town of Saint-Macaire, the remains can find several doors and walls dating from the thirteenth and fourteenth centuries, like the door of Benauge, former main gate of the old city, the door of Thuron with Barbican, and Rendesse door. One can also discover old medieval houses as merchant houses. The Messidan home with its arched ceilings and the home of Ysabeau Gassies particular, deserve a visit.

Place Mercadiou, or market square is framed by arches and has covered streets of the Middle Ages.

One can also find the port, the only existing macarien port, the Port of Nava street that leads visitors from the monastery to the first port of Saint-Macaire, or the theater of nature. The bandstand in neoclassical style, reinforced concrete, was built in the first half of the twentieth century.

The Ursuline convent, the seventeenth century, facing the door of the Benauge. It is now a retirement home.

Now closed to the public except during special events, Caves, underground tunnels dug in the rock that supports the city allowed the removal of stone. On the surface, one can discover a beautiful esplanade of neo-medieval style.

free outdoor film screenings are offered at the Cinésites festival in July.

The last weekend of August, the medieval days of the Dropt have several activities as costumed parades, a market, a banquet or contests.

In mid-September for the European Heritage Days, Saint-Macaire Night offers its heritage, a guided tour of the old town whose streets are lit by candlelight. 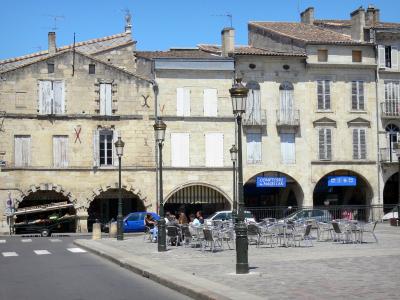 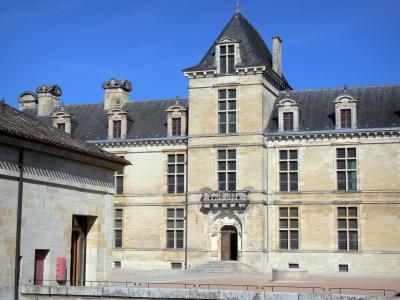 Cadillac Castle
A place with a history of splendour and decadence... 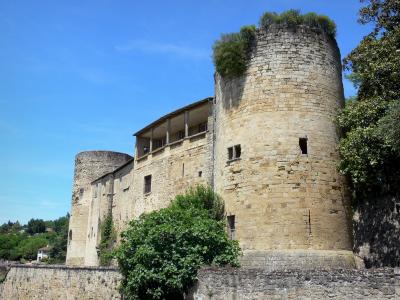 La Réole
Its old priory, medieval castle, and remains of the old ramparts... 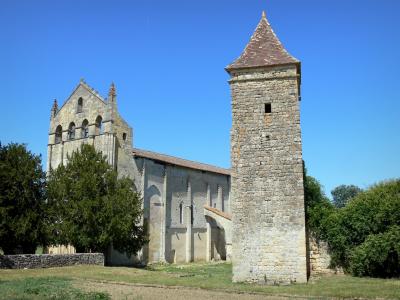 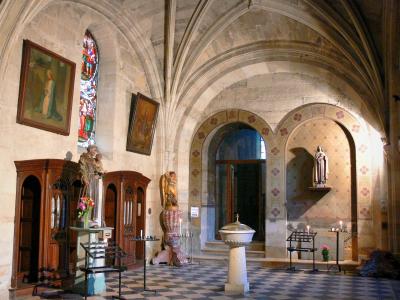 La Belle Lurette
8.6
57
French cuisine restaurant in Saint-Macaire
15 € per person
PLACE OF LIFE - This address offers you entertained for a drink, a plate and a good gig if you know when to get there. An unusual setting for an evening that changes the ordinary. CELEBRATIONS SOUND - One of the strong points of La Belle…
Located Saint-Macaire away
Favourite Bed and breakfast Lasserre
House with 1 bedroom in Noaillan
65 € per double room
A few kilometers from Sauternes, from the Landes of Gascogne, Bordeaux and farther from the bassin d'Arcachon, we offer you a getaway in our 19th century House that we are refurbishing into condition for fifteen years. Located in a natural classified…
Located 8.4 mi from Saint-Macaire
Favourite La camiranaise
9.7
10
House with 5 bedrooms in Camiran
95 € to 105 € per double room
Mansion of the 18th century in the heart of the Bordeaux vineyards. A near Saint-Emilion and Sauternes. 5 rooms of charm to welcome you and lazing around the pool.
Located 9.1 mi from Saint-Macaire
Favourite Sources coulon Adult only
House with 3 bedrooms in Arbanats
130 € to 200 € per double room
In their 18th century with its 3-hectare park and driving range, the heart of the vineyards of Graves and Sauternes doors, Annie and Philippe welcome guests to sources Coulon, guest rooms exclusively for guests adults. It is a fully privatized…
Located 10.9 mi from Saint-Macaire
Favourite
All bed & breakfasts around Saint-Macaire The Chapelière of Barsac
House for 4 people in Barsac
35 m², 1 bedroom
280 € per week
The cottage is located in a ground floor house (no garden) on a quiet street in the center of town Barsac on the road of wine of Sauternes. Apartment of 35 sqm, sleeps 4 maximum, 5 min walk to shops and the train station. - A living room with…
Located 5.4 mi from Saint-Macaire
Favourite Michel barrier
House for 15 people in Grignols
300 m², 6 bedrooms
1800 € to 2400 € per week
This house is a contemporary wood frame house, it was built by myself and I wanted to keep the local style of the Landes farms, of course revisited for a very bright house - Even inside you are in contact with the nature around you - the very…
Located 15.9 mi from Saint-Macaire
Favourite Le Magnolia 4 to 6 guests
Villa for 6 people in Saint-Caprais-de-Bordeaux
140 m², 3 bedrooms
86487 € to 1750 € per week
Chateau la Gontrie is an ideal base to discover all the beauties and treasures of Bordeaux and its region. You will enjoy all the modern comfort of a fully self-catering holiday house set in a calm lovely hilly countryside on a family owned…
Located 16.7 mi from Saint-Macaire
Favourite
All vacation rentals around Saint-Macaire 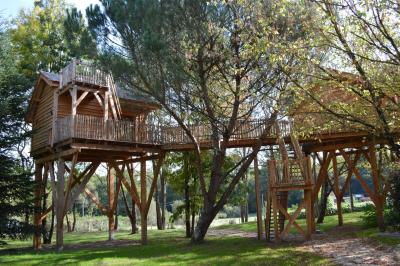 Domaine EcÔtelia
10
1
Campsite in Le Nizan
25 pitches on 9ha
Real open air hotel, Domaine EcÔtelia, located in southern Gironde near Sauternes, invites you to experience an unusual holiday in harmony with nature, discovering the traditional habitats of the 4 corners of the world. Preserved area near the…
Located 6.4 mi from Saint-Macaire
Favourite 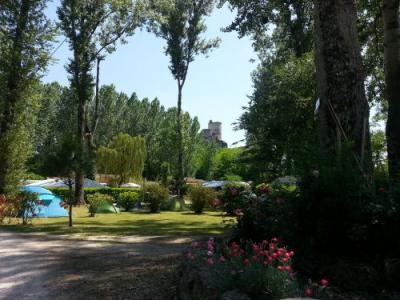 Camping du Vieux Château
9.5
8
Campsite in Rauzan
76 pitches on 2.6ha
1480 € to 2090 € per day (2 pers / tent / car)
Owners since 2014, Thom and Pelagie welcome you to Camping du Vieux Château, situated at the foot of a medieval castle that adds a touch of magic to this quiet and green site. The campsite is just 200 m walk from the village of Rauzan in Gironde.…
Located 15.8 mi from Saint-Macaire
Favourite 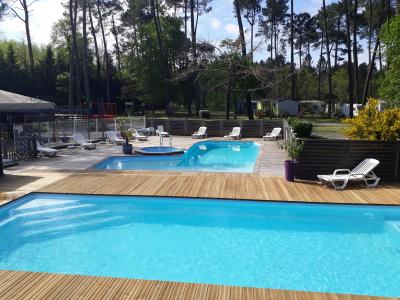 Vert Bord'Eau
Campsite in Saint-Symphorien
75 pitches on 4ha
1350 € to 21 € per day (2 pers / tent / car)
Vert Bord'Eau, family camping kind ** in Saint Symphorien (33113) - Camping Green Bord'Eau ** is located in Saint Symphorien (33113), on the borders of the departments of Gironde and Landes, in the heart of Regional Natural Park of Landes de…
Located 16.6 mi from Saint-Macaire
Favourite
All campsites around Saint-Macaire 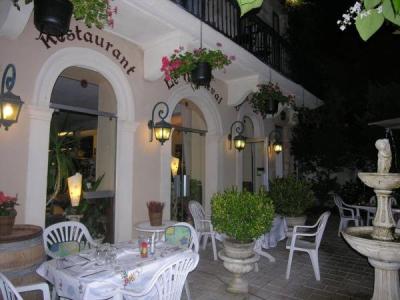 Appart'Hôtel Les Tilleuls
8.1
277
Hotel in Saint-Macaire
Room from 67 €
Set in a 16th-century building, this property is located in the medieval city of Saint-Macaire and is surrounded by the ramparts. This property features a bar, a spa and a fitness centre. There is also a restaurant, a large sun terrace viewing…
Located Saint-Macaire away
Favourite 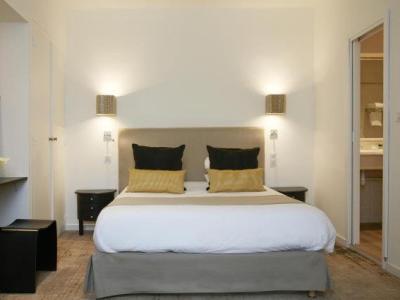 Hotel Claude Darroze
8.9
167
Hotel in Langon
Room from 90 €
Situated in the city centre of Langon, just a 30-minute drive from Bordeaux in a former post office, Hotel Claude Darroze offers a terrace and garden. The Graves Castles and vineyards are within driving distance. Decorated in a unique style,…
Located 1.3 mi from Saint-Macaire
Favourite
All hotels around Saint-Macaire