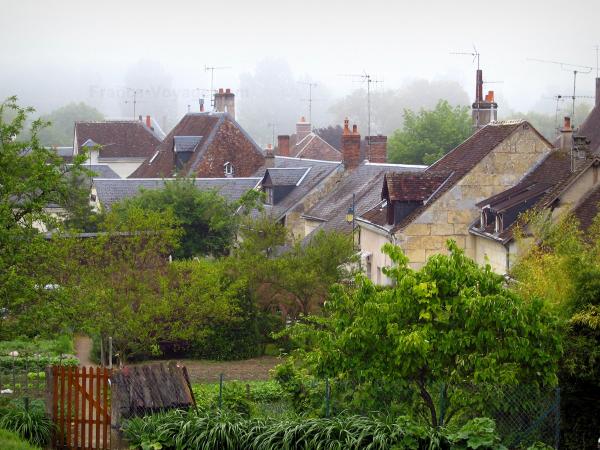 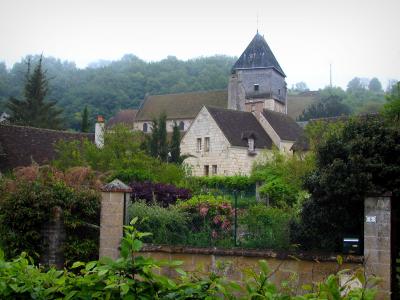 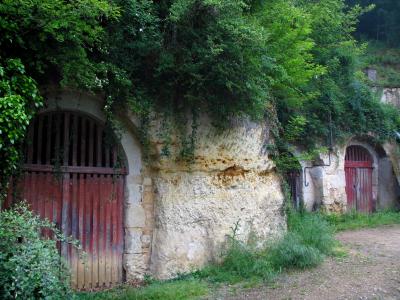 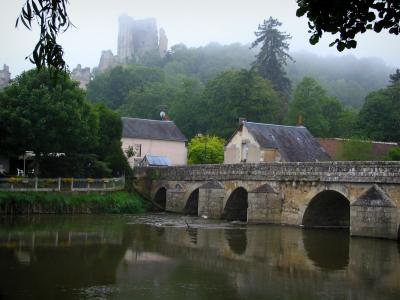 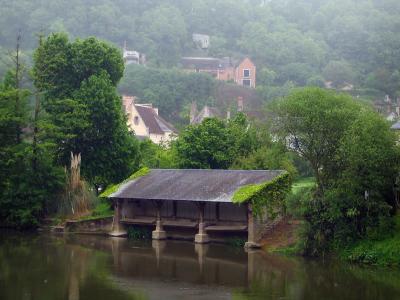 Lavardin is a charming medieval village not to be missed: Its bridge of Gothic style spanning the Loir River, its bank decorated with weeping willows that is a great place for daydreaming, its Romanesque church containing magnificent old frescoes, its beautiful houses, its troglodyte houses and the ruins of its feudal castle dominating the village. Moreover, this magnificent village appears on the list of the Most Beautiful Villages of France.

Classified as one of the most beautiful villages in France, Lavardin is a commune of the Center-Loire Valley in the Loir-et-Cher department. The village takes place on the banks of the Loir, not far from Montoire-sur-Loir, and in the arrondissement of Vendôme.

Populated as early as Prehistory, Lavardin is strengthened as early as the tenth century. Over the centuries, the village was, like its castle, the place of many battles and other seats, especially during the struggle between leaguers and Protestants. It was at this time, in 1589, that the castle was dismantled on the orders of Henri IV. The commune of Lavardin has retained its medieval aspect and today plunges visitors into another era. Very touristy, it still has several buildings to discover during a walk in this magical place. Troglodytic houses mingle with the Renaissance dwellings for a unique effect. Campsites in the Loir-et-Cher
Quality establishments for a successful holiday. Places not to be missed!
Plan my stay

Campsites in the Loir-et-Cher
Quality establishments for a successful holiday. Places not to be missed!
Plan my stay

Built at the end of the 11th century, Saint-Genest church is renowned for its frescoes and murals. In Romanesque style, it was originally the church of a priory. It has a square bell-tower opposite the ruins of the old castle, revealing two carved bas-reliefs. Inside, the decor is stunning; Everything is adorned, from the pillars of the choir to the windows of the aisle. Uncovered in the twentieth century, frescoes and murals were made between the 12th and the beginning of the 16th century. In the apse, one can admire the baptism of Christ or the tree of Jesse. More recent, the paintings of the southern absidiole represent Paradise, Hell or Purgatory. Vegetable motifs take place on the capitals, revealing rare examples of ancient paintings formerly associated with Romanesque sculptures.

The castle of Lavardin dates from the beginning of the eleventh century. Sold to the Comte de Vendomois later, it became the main fortress at the end of the 12th century. Remodeled in the 15th century, it was dismantled on the orders of King Henry IV at the end of the 16th century. Classified as Historical Monuments, it only has a few vestiges standing proudly on a rocky promontory. Several elements are always visible, such as the staircase of honor, the keep, the guards room or three enclosures that once protected the building.

The Grotto of the Virgins is a cave-dwelling troglodytic on two floors. One can find in particular a chimney, a grain silo or an oratory. Walking through the town, you can discover other troglodytic cellars, some of which are still inhabited.

To appreciate all the charm of Lavardin, there are several trails, including the roque aux biques. This old path with goats, the beginning of which is very steep, offers an unobstructed view of the village and its surroundings, and allows to pass in front of numerous troglodytic cellars. Do not miss the walk of the poet, who takes his name from Ronsard, born only a few kilometers away. This path runs along the Loir and allows to appreciate an old wash house.

Built at the end of the 12th century, the Gothic bridge is more than 56 meters long and consists of eight stone arches.

Under the town hall, in the heart of the village, a museum has opened. In a vaulted room, it presents various collections of objects and documents retracing the history of Lavardin and its castle.

Saint-Vincent is celebrated at the end of January, including a Mass and an induction ceremony at the Brotherhood of Puette and Franc Pinot. Before the traditional meal, different animations are also proposed.

Every first Sunday of March, the village welcomes the Chouine world championship. It is a card game dating back to the sixteenth century and very popular in the center-west of the country.

Every Monday of Easter, a hike offers several circuits between ten and more than twenty kilometers to discover the most beautiful sites of the surroundings.

As of July 13, the village proposes a popular ball or the burning of the castle.

In mid-August, an flea market is organized.

Painters' days take place at the end of September, offering local artists a chance to compete by painting some of the most beautiful landscapes of Lavardin.

A Christmas market is held each year on the first weekend of December. 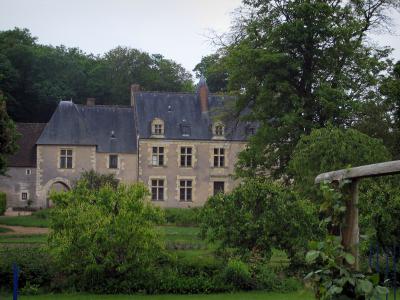 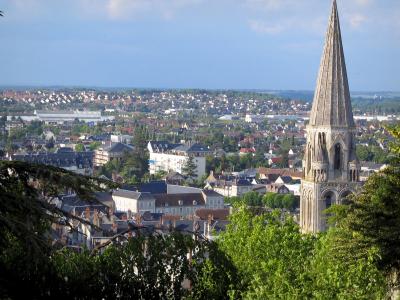 Vendôme
A City of Art and History full of attractions 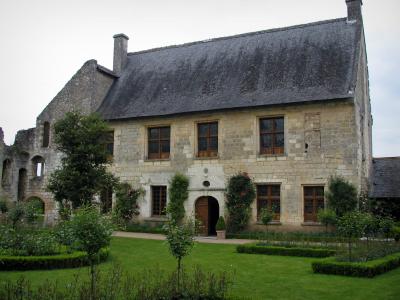 The Priory of St. Cosmas
The place where the famous poet Pierre de Ronsard spent his final years 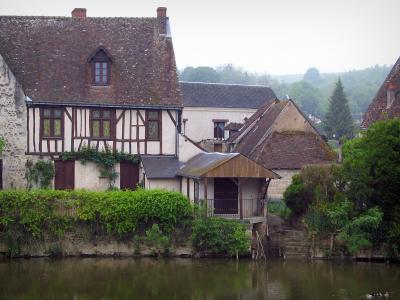 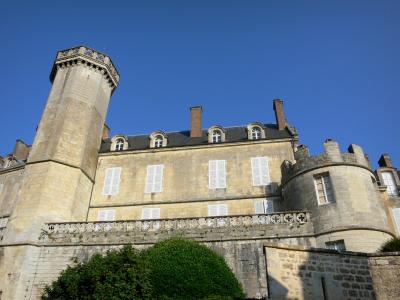 Montmirail Castle
Enjoy a lovely view of Perche-Gouët from its keep! 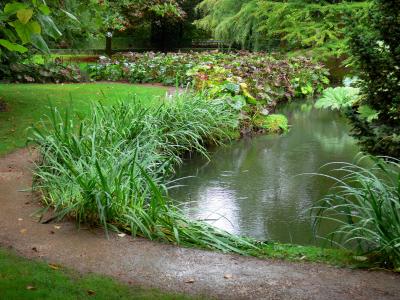 The troo coterie
10
5
House with 2 bedrooms in Troo
75 € to 95 € per double room
Bed and breakfast and table d'hôte located in an old farmhouse renovated in the middle of a greenery. Charm and tranquility await you.
Located 6 mi from Lavardin
Favourite 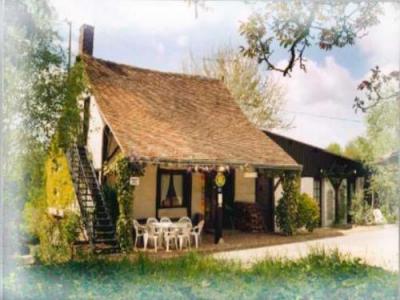 The Maréchalerie, in the Loire Valley
9.4
38
House with 5 bedrooms in Monthodon
50 € per double room
Friendly Loire valley BnB and studios (self catering accommodation) next to the loire valley castles, in charming converted rustic forge. This old Farrier timbered 18th century has preserved its authenticity with its forge-fire and beams weathered…
Located 9.3 mi from Lavardin
Favourite 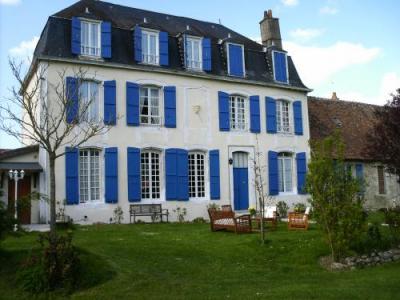 La bretonnerie
9.4
16
House with 5 bedrooms in Vendôme
70 € per double room
Typical house on 2ha flown at the heart of the Loire castles. At 1.5 km from the historic heart of the city of Vendome. Parking bicycles, motorcycles, cars.
Located 9.6 mi from Lavardin
Favourite
All bed & breakfasts around Lavardin 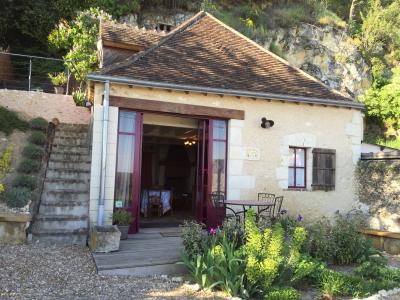 Le vieux Chai de Trôo
10
1
House for 4 people in Troo
75 m², 1 bedroom
330 € to 450 € per week
Cottage in the heart of the troglodyte village of Troo in Loir Valley. This house of 75 m² is planned for 2 people with all the comforts and appliances necessary. Two terraces complete and habitat that parking space in the property is enclosed…
Located 5 mi from Lavardin
Favourite A big house in the Center Val de Loire
10
8
House for 15 people in Savigny-sur-Braye
360 m², 9 bedrooms
1600 € per week
This large family home, consisting of 8 bedrooms and 8 bathrooms, as well as a baby room will bring together several families to spend pleasant holidays while finding peace, quiet and peace. Tranquility. The living room with its fireplace will…
Located 7 mi from Lavardin
Favourite Gîte de Touchelion
House for 4 people in Chemillé-sur-Dême
80 m², 2 bedrooms
195 € to 394 € per week
Come relax in the green in this cottage on the sixteenth farm, where you will have all the modern comforts and a beautiful view of the surrounding countryside. We can, if you wish, make you discover the sheep farm present on the farm. The Touchelion…
Located 13.1 mi from Lavardin
Favourite
All vacation rentals around Lavardin 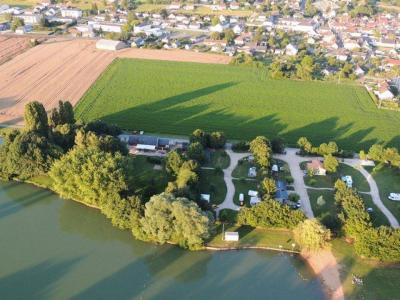 Camping Les Peupliers ***
9.2
1
Campsite in Montlouis-sur-Loire
83 pitches on 1.8ha
1580 € to 17 € per day (2 pers / tent / car)
This campsite is ideally located on the "Loire by bike" circuit and labeled "Accueil Vélo". The place is ideal to visit the Castles of the Loire and the famous vineyards of the region. It has 83 spacious pitches on a plot of 1.8 hectares. You…
Located 24 mi from Lavardin
Favourite
All campsites around Lavardin hotel de la bonnaventure
8.7
54
Hotel in Mazangé
Room from 40 €
Hotel de la bonnaventure is located in Mazangé. There is a terrace and guests can make use of free WiFi and free private parking. At the inn, each room comes with a desk, a flat-screen TV and a private bathroom. Guest rooms will provide guests…
Located 5.8 mi from Lavardin
Favourite 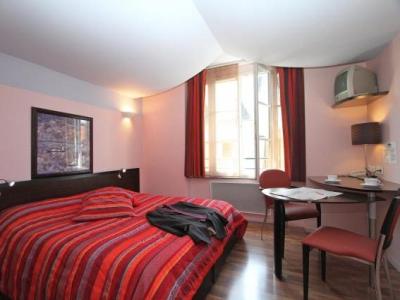 Le Saint Georges
7.8
162
Hotel in Vendôme
Room from 66 €
Le Saint Georges hotel is located in Vendôme, on an island on the River Loire. It offers soundproofed rooms and suites with free Wi-Fi, a kitchenette and hydro-massage showers. Free parking is possible on site. The Saint-Georges Restaurant serves…
Located 9 mi from Lavardin
Favourite
All hotels around Lavardin