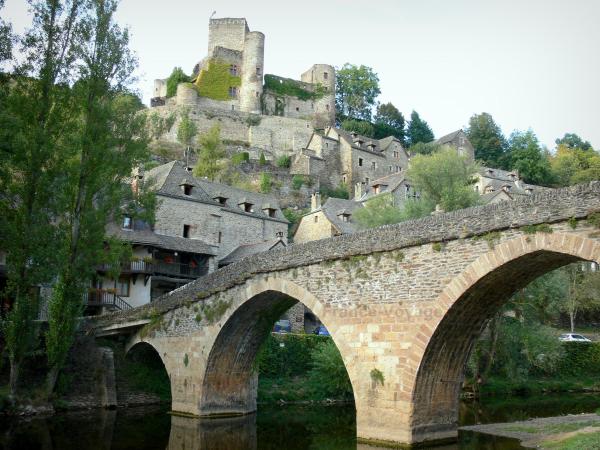 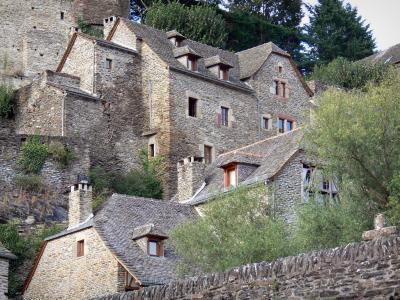 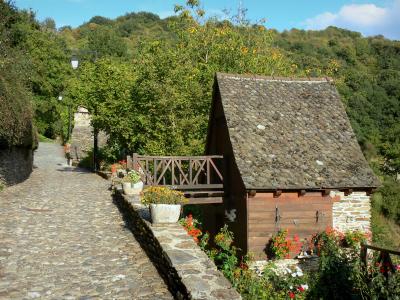 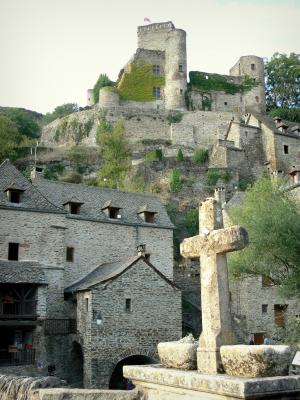 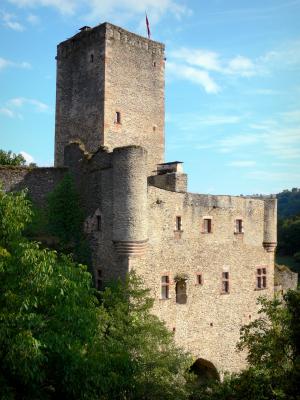 Nestling at the heart of the Aveyron Valley, the superb village of Belcastel, listed among the most beautiful villages of France, looks like something from a picture postcard, with its stone houses and their thackstone roofs, old bridge reflected in the peaceful water of the river, and the imposing form of its medieval castle standing next to a square keep. You can also enjoy a lovely walk along on the banks of the Aveyron and long the charming paved side streets!

Dating from the 15th century, the village church located on the left bank contains the tomb of Alzias de Saunhac, lord of Belcastel.

Ranked among the most beautiful villages in France, the small town of Belcastel takes place in the department of Aveyron, not far from Rignac. With less than 200 inhabitants, it is located in the Massif Central, not far from Clairvaux-l'Aveyron, Goutrens and Colombiès.

Medieval village with rich and fascinating history, Belcastel was built around its 11th century castle. Peaceful and tranquil over the centuries, it is today a Mecca for tourism in the region thanks to its incredible architectural heritage and its quaint charm. Walking through the narrow streets, you will travel back in time to the Middle Ages, imagining the life of the inhabitants at the time.

Belcastel also seduces with its natural heritage and its exceptional landscapes conducive to walks with friends or lovers.

Listed as a historic monument, the castle was completely restored between the mid-1970s and early 1980's. Imposing medieval building that was once home to the family of Saunhac, it is above all a fortress built on a small rocky emergence on the banks of Aveyron. Founded in the mid-eleventh century, it was completed in the fifteenth century. It is now open to the public from April to November, offering guided tours and temporary art exhibitions, as well as a large collection of medieval armaments.

Built in the 15th century by Alzias de Saunhac, then lord of Belcastel, the church of Saint-Madeleine welcomes the tomb of its founder with a beautiful lying. It is possible to admire in the interior four statues classified as Historical Monuments as an object, including a Madonna and Child, Saint Madeleine, Saint Christopher and Saint Anthony, as well as a contemporary Way of the Cross.

Also built in the 15th century by Alziac de Saunhac, the bridge reveals a typical medieval architecture. He participated in commercial exchanges between the village and the surrounding villages. Gothic style, it also presents a stone cross of the twelfth century.

While strolling in the village, you will also be able to discover the bread oven, the small winding lanes or the chairs of the lord. Carved in the rock of Roquecante, even shale, the latter date from the sixteenth century.

500 m upstream from the village, do not miss the ruins of a fort of the fifth century, above the cave of Lourdou.

In the old forge recently restored, you can enjoy trades of the past with three levels, the blacksmith in his living environment, the fisherman of Aveyron with his flat-bottomed boat or the clog and tools.

Night markets are offered on Friday nights in July and August.

A quine is organized by the Tourism Info Point in March.

In June, place at the fires of Saint-Jean on the banks of the Aveyron.

The penultimate Sunday of July, Belcastel proposes its votive festival with its mass and its animations.

The first Sunday of September, the National Village Day is an opportunity to discover a flea market and a garage sale. 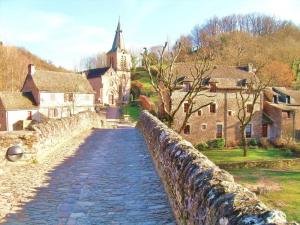 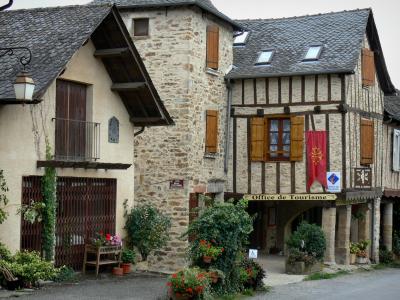 Najac
A medieval town dominated by its royal fortress 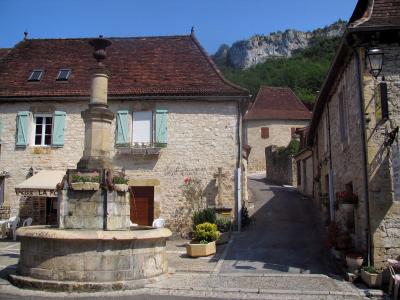 Autoire
This beautiful village is located in a remarkable natural setting 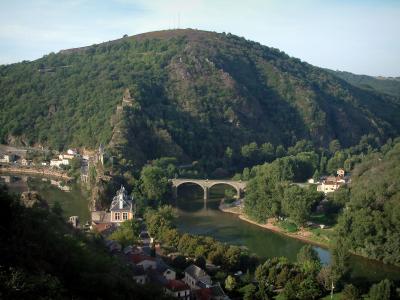 Ambialet and the Tarn valley
A picturesque site ... 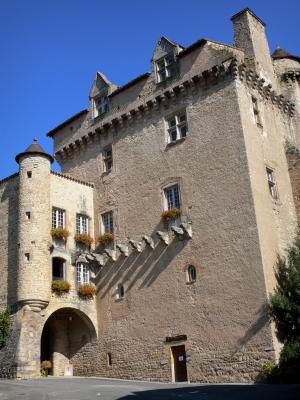 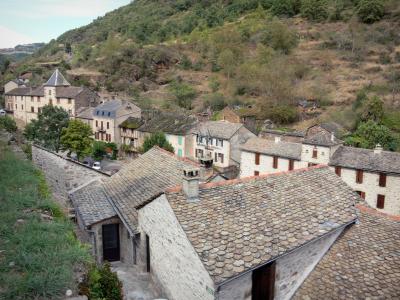 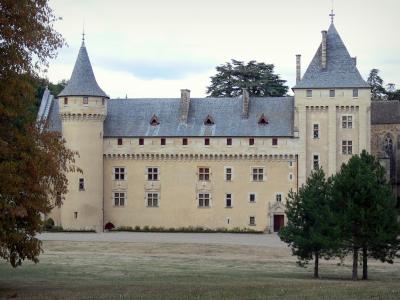 Loc-Dieu Abbey
An old Cistercian abbey reminiscent of a fortress Auberge de l'Ady
8.9
82
French cuisine restaurant in Valady
37 € per person
Located in the valley of Marcillac, the Auberge de l'Ady welcomes both the lunch and dinner in a cozy atmosphere. You will enter a bright and cozy restaurant, decorated with beautiful paintings on the wall and various green plants. Chef Cedric…
Located 6.5 mi from Belcastel
Favourite Le Moulin de Limayrac
9.6
22
Mill with 4 bedrooms in Colombiès
70 € to 80 € per double room
Guénaëlle & Gordon welcome you to the Moulin de Limayrac. Built in the 19th century and set in the beautiful Aveyron countryside it is a relaxing and charming place to stay. The Moulin offers you 1 double and 3 family bedrooms with private shower…
Located 4.1 mi from Belcastel
Favourite 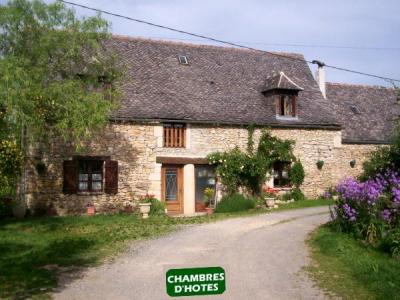 Guesthouse on the farm of La Borde
NEW
Farm with 4 bedrooms in Bournazel
60 € per double room
Our four bedrooms are furnished in a characteristic building, the old barn Castle Bournazel. They are classified 3 ears the sanitaie is private for each room with separate toilet in the bathroom. Small homemade breakfast are served in a common…
Located 5.2 mi from Belcastel
Favourite Dungeon and breakfast
House with 4 bedrooms in Bournazel
55 € per double room
Bed and breakfast furnished with comfortable floor of an old barn, renovated in Inn.
Located 5.3 mi from Belcastel
Favourite
All bed & breakfasts around Belcastel Apartment for 2 person
Apartment for 2 people in Cransac
34 m², 1 bedroom
100 € to 190 € per week
Apartment in a house on the ground floor with independent entrance and private parking space.
Located 10.1 mi from Belcastel
Favourite 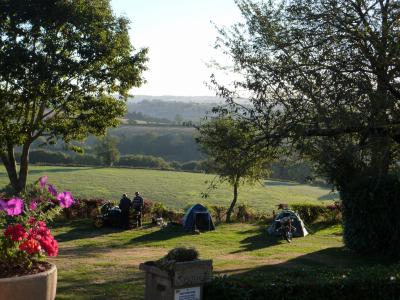 Camping La Fabrique
9.2
1
Campsite in Camboulazet
6 pitches on 1ha
12 € per day (2 pers / tent / car)
Camping at the farm with a panoramic view of the countryside of Aveyron Ségala. It is located in a place said, The Fabrie on 12160 Camboulazet town 9 km from Baraqueville, 25 km from Rodez, 40 km from Albi. A Baraqueville you will find supermarkets,…
Located 13.5 mi from Belcastel
Favourite 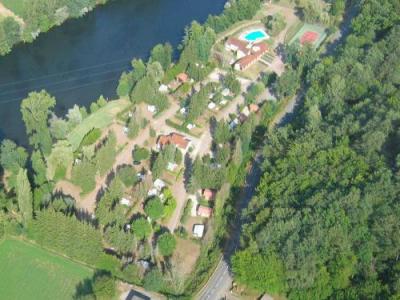 Camping du Bosquet
9.4
13
Campsite in La Fouillade
35 pitches on 3.5ha
16 € to 18 € per day (2 pers / tent / car)
Bosquet due south, overlooking a lake. Pleasant site at 600 m from the heart of the village with all amenities and shops. Strong tourism potential within half an hour. Stay calm in family.
Located 18.4 mi from Belcastel
Favourite
All campsites around Belcastel Le Vieux Pont
9.5
43
Hotel in Belcastel
Room from 100 €
LE VIEUX PONT is a hotel set in Belcastel city center, along the river. This property provides guests with a restaurant. The property features free private parking and free WiFi. The rooms in the hotel are equipped with a TV with satellite channels.…
Located Belcastel away
Favourite 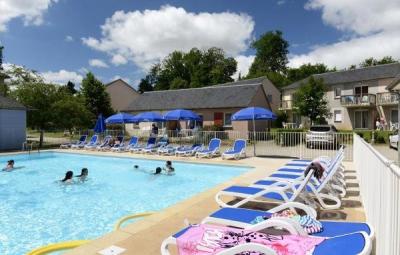 Les Chambres de l'Ady
9.4
63
Hotel in Valady
Room from 63 €
Les Chambres de l'Ady features free WiFi throughout the property and rooms with air conditioning in Valady. Boasting room service, this property also provides guests with a restaurant. Guests can enjoy city views. All rooms in the hotel are…
Located 6.5 mi from Belcastel
Favourite
All hotels around Belcastel