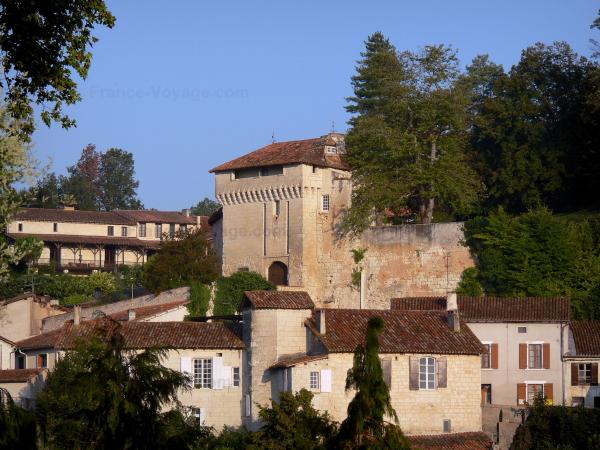 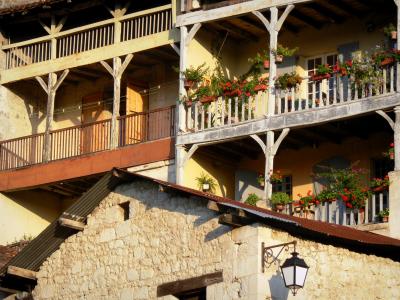 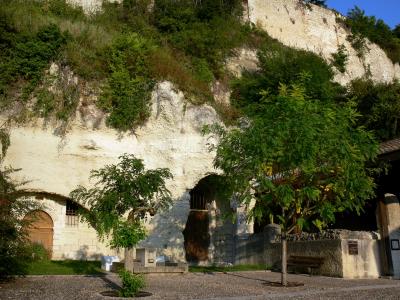 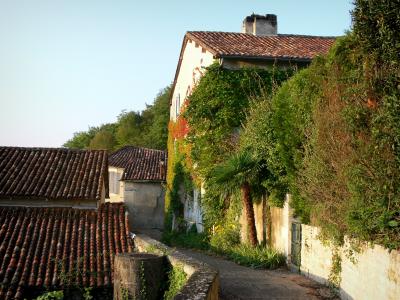 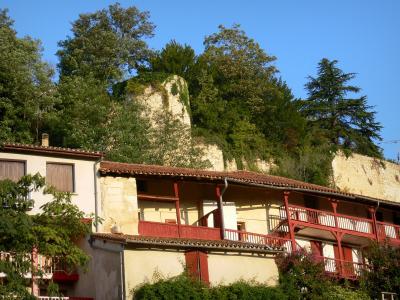 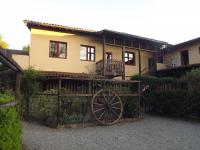 Vacation rentals in the Charente
Find recommendations at the best price. Book your stay online and save money!
View selection

Listed as one of the Most Beautiful Villages of France, Aubeterre-sur-Dronne immediately appeals to the visitors with its beautiful houses arranged as an amphitheatre and dominating the River Dronne. The charming wooden balconies decorating the facades of certain houses add to the picturesque nature of the place.

The village possesses a remarkable historic building, which is quite unusual: the Saint-Jean monolithic church, an underground church carved out of the rock in the 12th century by the Benedictines. This building has a vault reaching 20 metres high and is the biggest troglodyte church in Europe! This site should not be missed under any circumstances!

In the summer, the sandy beach along the River Dronne, below the village, is the perfect place for relaxing and swimming. Water sports fans can canoe and kayak to their heart's content on the River Dronne.

Vacation rentals in the Charente
Find recommendations at the best price. Book your stay online and save money!
View selection

Aubeterre-sur-Dronne is a village in the south of the department of Charente, in the region of New Aquitaine, on the border of the Dordogne.

The town is located 45 km south of Angouleme.

Erected on one of the routes of the pilgrimage of Santiago de Compostela, the village developed from the thirteenth century, seat of a viscount dependent on the lord of Angoulême. Ballotted between French and English during the Hundred Years War, the viscount was then during the wars of religion, in the sixteenth century. Then, faithful to King Henry IV, the lord of Aubeterre helped his sovereign against the League and then rebuilt the castle of the village became a marquisate.

The old fortified town became today a tourist village of first choice, rich in a singular heritage, and in its high part, the alleyways lined with white houses dominate the valley of the river which forms a loop around The commune, the Dronne.

With about 400 inhabitants, Aubeterre-sur-Dronne has a low, commercial and lively part that goes down to Saint-Jean church: one of the few troglodyte churches in France.

Stage of choice in terms of green tourism, Aubeterre-sur-Dronne is a member of the Association of Most Beautiful Villages of France.

If it is obviously possible to discover the charms and the remarkable sites of the village independently, guided tours are possible all year round (4 euros). More information is available on +33 6 79 85 81 26.

It is in the lower part of the commune that is located its jewel, the underground church of Saint-Jean. It was dug in the 12th century, and its main vocation was to shelter a reliquary arranged in the limestone wall. As more and more pilgrims were making their way to Saint James, a church and a crypt were dug, and then an even larger room after a supporting wall was built in the 17th century.

On the ground are still hundreds of tombs, which evoke a necropolis similar to the troglodytic churches that the Crusaders visited in Cappadocia.

On the high village, the feudal castle remains only its entrance - the chatelet - dating from the 16th. The commons were transformed into a dwelling. The main building was dismantled in the 19th century.

On the other hand, we can admire the convent of the Minimes, erected in the 16th century, transformed into a retirement home, and of which one can still visit the chapel. A mix of late Gothic and baroque, its style surprises. It is worth dwelling at the level of its wooden altarpiece that surmounts a sculpture depicting angels.

It is then advisable to visit the remarkable cloister.

From the monastery of the Cordeliers (another religious order), traces remain, on the other hand, in the village, like a shell that adorns a dwelling.

Finally, from now on private property, one can admire from outside the former convent of the Poor Clares. So many congregations that had settled to welcome the pilgrims and to establish their power in a disputed fief.

Still at the top of the village, the church of Saint-Jacques is worth the detour: its facade with remarkable sculptures dates from the twelfth. The rest of the building destroyed during the wars of religion was rebuilt in the eighteenth on the model of the cathedrals of Poitiers and Angouleme, mixing Western and Eastern influences.

Once the important patrimonial legacy has been visited and the pleasant streets with the houses huddled, several other places are offered to the curiosity of the tourist.

This is the case of the museum dedicated to Marcel Merkès and Paulette Merval, a starring couple of French operettas of the 20th century. Costumes, photos, biographies are presented. Open from October to June by appointment at +33 6 43 61 40 77. And every day from 3 pm to 6 pm in July and August. Price: 5 euros.

The Ludovic Trarieux space (in his native house), a permanent exhibition on the human rights and life of the founder of the French League for the Defense of Human Rights and Of the Citizen. Information on +33 5 45 98 04 08.

In addition to numerous art galleries and other handicraft shops, a stage can be planned at the Maison des marionnettes where performances are scheduled every day in July and August. Information on +33 5 45 98 45 59.

For lovers of hiking, mountain biking or horseback, many trails departing or passing through Aubeterre are laid out. Some of them take the old road to Santiago. Information at +33 5 45 98 57 18.

The practice of fishing is possible from the banks of the Dronne (map available at the grocery of the village), just like the river lends itself to canoe-kayak. Information on +33 5 45 98 51 72.

Finally, for a refreshing break, the recreation area on the banks of the river allows swimming (monitored in summer), picnic and games for children. Information at +33 5 45 98 50 33.

During the summer season, many concerts of classical or folk music are scheduled within the framework of the Nuits Musicales festival (some within the underground church itself). Information at +33 5 45 98 57 18.

For gourmets and gourmands, in a convivial atmosphere, the Sunday morning market, on the main square, is a must to discover the rich Charentais terroir and the nearby Périgord. 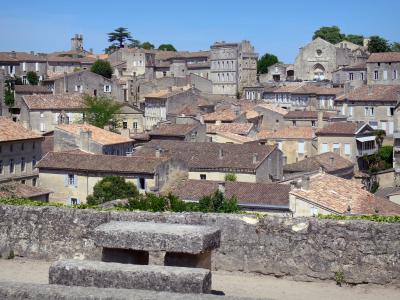 Saint-Émilion
A charming medieval town famous for its vineyards 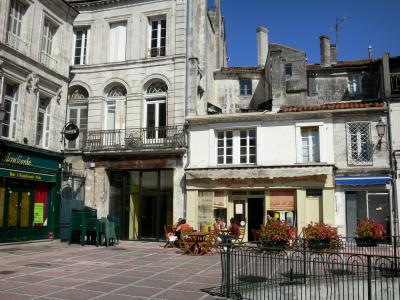 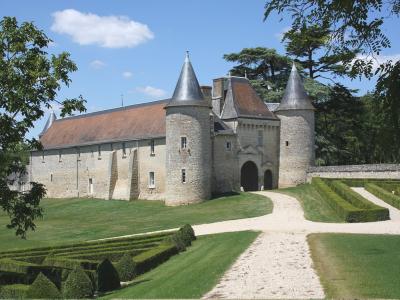 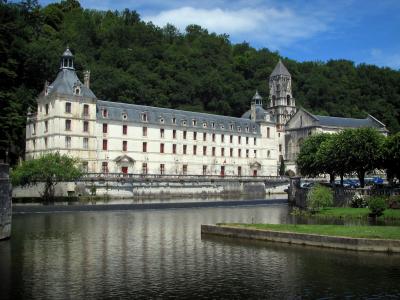 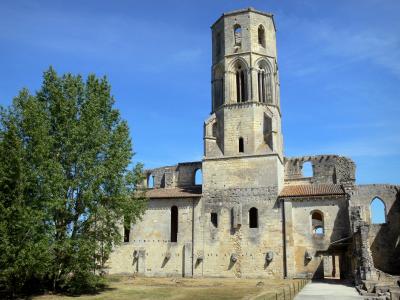 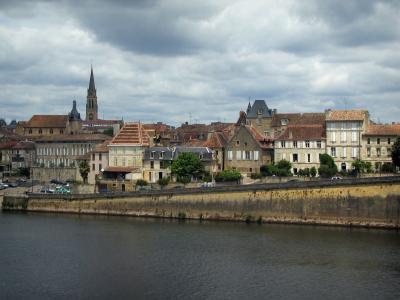 Bergerac
A medieval town renowned for its vineyards Le Chateau de Neuvic
8.6
46
French cuisine restaurant in Neuvic
32 € per person
Whether alone or in a group, we welcome you to a sixteenth century castle and we offer fine cuisine to suit all budgets
Located 31 km from Aubeterre-sur-Dronne
Favourite
All restaurants around Aubeterre-sur-Dronne La Grange de Lucie-Périgord guest rooms
10
9
House with 5 bedrooms in Nanteuil-Auriac-de-Bourzac
79 € to 87 € per double room
Delights of Perigord, the doors of Charentes ! Our personalized rooms where wood and stone are everywhere, have their own bathroom with separate w-c and private (Baby bed) (Wifi). We have equipped every room heat and authenticity elements such…
Located 12.9 km from Aubeterre-sur-Dronne
Favourite 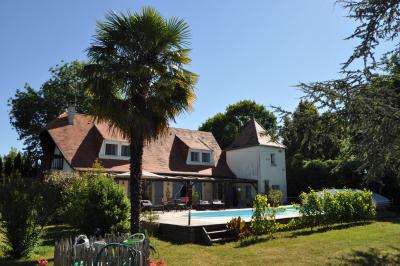 Le Puits des Lucques
9.7
17
House with 1 bedroom in Ménesplet
62 € per double room
The country 'Bastides' and castles, between Bergerac, Saint Emilion and Pomerol, where the art of living is available in any season, beautiful room with on the first floor of our Perigord. Outdoor heated pool. (March 01- November 01) Jams from…
Located 29 km from Aubeterre-sur-Dronne
Favourite 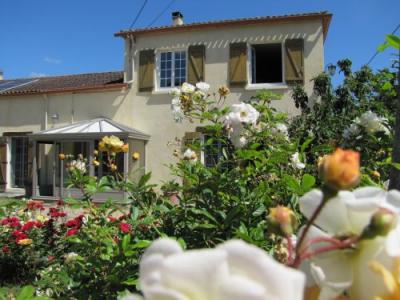 Amourgnac
9.6
39
House with 3 bedrooms in Bourgnac
55 € per double room
Welcome to our Bed & Breakfast with an incomparable touch of familiarity in one of the most beautiful regions of France. We invite you to get to know the culture, history, the landscape and the culinary specialities of the fascinating region…
Located 34 km from Aubeterre-sur-Dronne
Favourite
All bed & breakfasts around Aubeterre-sur-Dronne 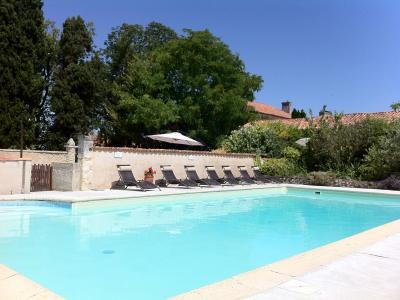 Manor of Longeveau
Manor for 100 people in Pillac
1000 m², 70 bedrooms
795 € to 2190 € per week
Le Manoir de Longeveau is a former Cognac Estate on the Charente / Dordogne border, nestled in a valley designated by the Michelin guide as ‘A Place of Special Beauty' ! Longeveau offers a selection of 32 thoughtfully renovated stone cottages…
Located 5.1 km from Aubeterre-sur-Dronne
Favourite 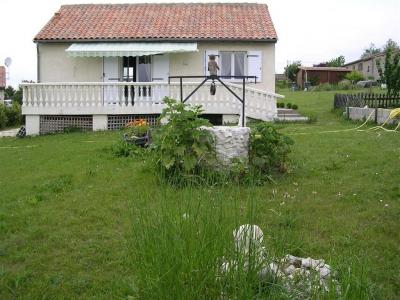 The Green House
NEW
House for 4 people in Bertric-Burée
50 m², 2 bedrooms
240 € per week
In the Green Périgord, a detached house in a fenced area, on the outer edge of a small village. Close to riberac (7 km) where you will find, supermarkets, pharmacies, medical practices, cinema, swimming pool. Tennis, horseback riding… All around,…
Located 14.9 km from Aubeterre-sur-Dronne
Favourite 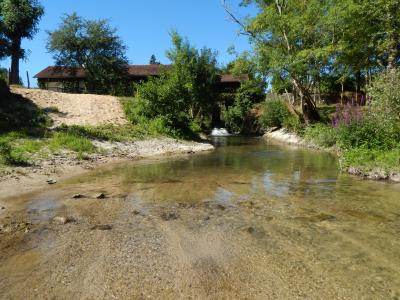 Moulin feet in water for 6 people
9.7
14
Mill for 6 people in La Roche-Chalais
100 m², 3 bedrooms
500 € to 800 € per week
Moulin feet in the water - natural jacuzzi Located on the borders of Périgord and Charente, in a wooded and green surroundings on the banks of "La Dronne" hides the mill "Feydeau Island" for 6 people, fully restored, rated 3 * (European standards…
Located 18.3 km from Aubeterre-sur-Dronne
Favourite
All vacation rentals around Aubeterre-sur-Dronne 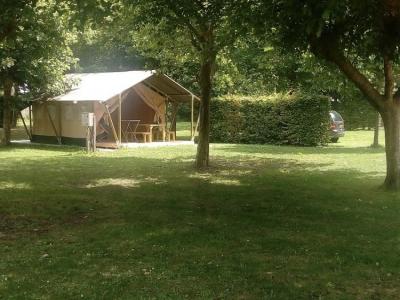 Camping du Lac
Campsite in La Jemaye-Ponteyraud
33 pitches on 3ha
1640 € to 2020 € per day (2 pers / tent / car)
The Camping du Lac, located in the tourist site "Nature and Leisure Sport" - the heart of this natural area of ​​Perigord combining the pleasures of the forest of the Double by its trails accessible to pedestrians and mountain biking, a beautiful…
Located 10.4 km from Aubeterre-sur-Dronne
Favourite 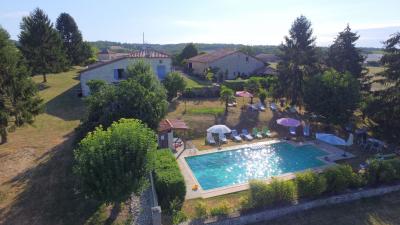 Chez Sarrazin Gites and Camping
Campsite in Brossac
7 pitches on 1.5ha
15 € to 25 € per day (2 pers / tent / car)
Formerly a farm, Camping Chez Sarrazin is conveniently located near the large village of Brossac, with its shops and restaurants. The southern Charente, on the border of the departments of Dordogne and Charente-Maritime, offers beautiful countryside,…
Located 16.4 km from Aubeterre-sur-Dronne
Favourite
All campsites around Aubeterre-sur-Dronne 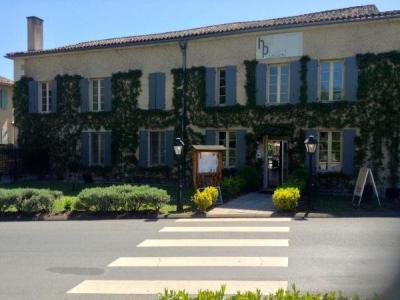 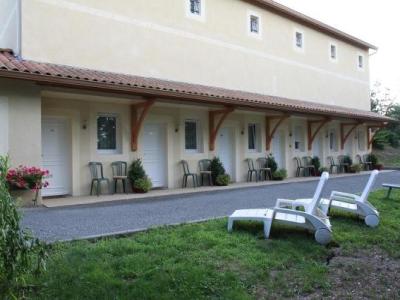 Rev'hotel
8.3
134
Hotel in Ribérac
Room from 59 €
The Rev'hotel is located just outside the centre of charming Ribérac in a peaceful area surrounded by greenery. It makes a tranquil base for exploring the beautiful Périgord Vert countryside. There is a selection of rooms available at the Rev'hotel,…
Located 14.8 km from Aubeterre-sur-Dronne
Favourite 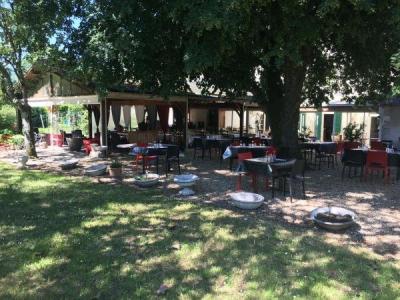 L'Art Dit Vin
8.4
126
Hotel in Saint-Aigulin
L'Art Dit Vin features a restaurant, bar, a shared lounge and garden in Saint-Aigulin. There is a terrace and guests can make use of free WiFi and free private parking. At the hotel, each room is equipped with a wardrobe and a TV. Guests at…
Located 19.5 km from Aubeterre-sur-Dronne
Favourite
All hotels around Aubeterre-sur-Dronne