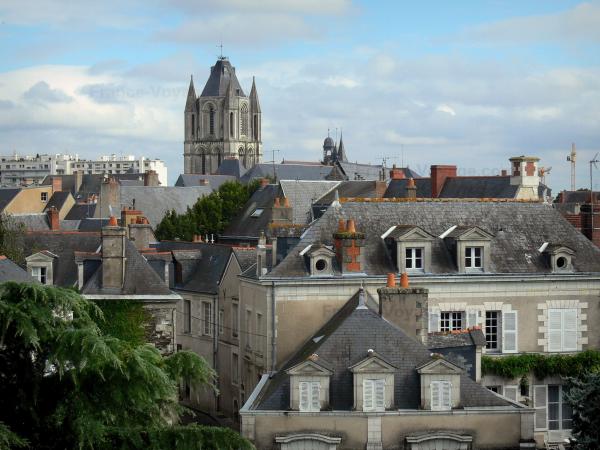 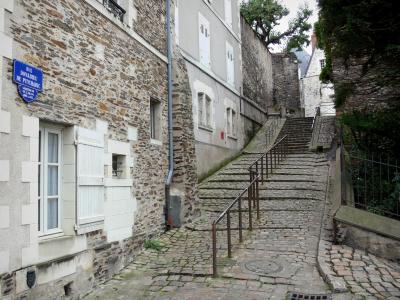 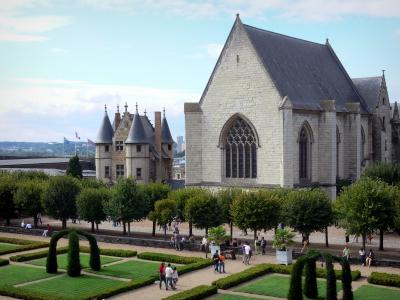 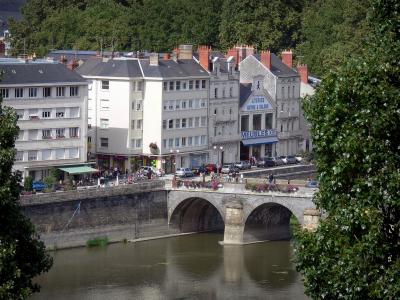 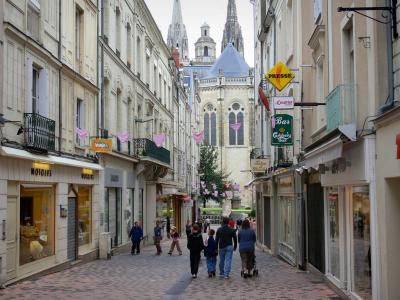 City of Art and History located on the edge of the River Maine, the capital of Anjou has a rich architectural heritage. Key monument of the city, the castle of Angers built in the 13th century by Saint Louis was the place of residence of the dukes of Anjou in the 14th and 15th centuries. Flanked by seventeen towers, this impressive medieval fortress is home to a masterpiece: the famous Apocalypse tapestry. Produced in the 14th century for duke Louis I of Anjou, this remarkable wall-hanging is the biggest medieval tapestry in the world today! Besides the Tapestries museum, the castle of king René also invites its visitors to discover its charming terraced gardens and its panoramic view of the city and of the River Maine.

The visit of Angers continues with the Saint-Maurice cathedral, a building of Anjou Gothic style which contains magnificent stained glass windows of the 12th and 13th centuries.

Behind the cathedral on the Saint-Croix square can be found Adam's house, a magnificent timber-framed residence dating from the 16th century, whose facade is decorated with wooden carved characters.

Not to be missed, the Fine art museum housed in the Logis Barrault mansion, has objets d'art related to the history of Angers on display, as well as paintings and sculptures from the 14th century to our days. This cultural venue also puts on temporary exhibitions around historical and contemporary works.

The David of Angers gallery, a museum situated in the former Toussaint abbey church, brings together numerous works of the famous sculptor from Anjou.

On the opposite bank, the Jean Lurçat and Contemporary Tapestry museum, housed in the ancient Saint-Jean hospital, exhibits tapestries of the 20th century, and in particular "le Chant du Monde" ("the World Song") of Jean Lurçat.

Town located on the Paris-Nantes, in the Maine-et-Loire, Angers is still the holder of the Loire Valley, a World Heritage Site by UNESCO. City of Art and History, the capital of Anjou perfectly blends its past and its future, amid a landscape where natural areas are a great place.

Cradle of the Plantagenet dynasty, which reigned for years in England and Normandy, Angers was once a major intellectual center in Europe. Even today, the city of the Good King René radiates its cultural activities and its important architectural and historical heritage.

Situated near the Regional Park Loire-Anjou-Touraine, the city is also distinguished by its strong involvement in the world of vegetation, being the first European horticultural center, but also by its delicate and sweet food. Deanery of Comice, a local pear, the greengage, through the wines of Anjou, the Loire fish dishes or as rich as focaccia, the rillauds or somersaults, has everything to seduce gourmets purposes.

The city of Angers is full of buildings and other mansions retracing the important history of its neighborhoods.

Castle Angers is the main tourist attraction of the city of Plantagenets. Built around 1230 by St. Louis, on a promontory overlooking Maine, it houses a jewel of French art, the Tenture of the Apocalypse. Commissioned in the 14th century by Louis I of Anjou, this 140-meter-long piece is astonishing in its size and colors.

Just behind the cathedral, Adam's house, which today houses the House of Craftsmen, is a beautiful architectural testimony. Not far, the cemetery of the East, opened in 1834, is nicknamed the cemetery of Père-Lachaise. It welcomes the last rest of many personalities.

Highlights of Angers, Saint-Maurice Cathedral and Saint-Aubin tower illuminate the old center of the city. The second houses today many temporary exhibitions of contemporary art. The former 13th century Toussaint abbey now houses an art gallery. It has been completely renovated with an impressive glass roof.

Built at the end of the 19th century, the Notre-Dame-des-Victoires church was classified as an historic monument.

In the former hotel Demarie-Valentin, a museum of natural history has been installed to recall the past of aromatic and medicinal gardens of town houses in the Renaissance. The garden of the city, created in the eighteenth century, offers four hectares of nature, including a collection of herbaria.

The museums are not lacking at Angers, starting with the Museum of Fine Arts, in the Logis Barrault, with a fine collection of works by Fragonard or Van Loo. In the old medieval hospital Saint-Jean took place the Jean-Lurçat museum and the contemporary tapestry, while the Pincé home hosts a museum of Egyptian, Greek, Roman or Chinese antiquities.

Always high cultural center in Europe, Angers does not miss events to recall this glorious past. They follow one another throughout the year, all over the city.

Since the late 80's, Angers is home to the festival Premiers Plans. Each year in January, a hundred young European directors compete to present a new generation of artists.

Between July and August, Tempo Rive offers musical scenes throughout the summer. Free, these evenings in the heart of the city seduce all tastes.

The King René walk allows you to discover the monuments of Angers free of charge.

In May, the Cinéma d'Afrique festival allows the French public to discover the African culture for a week. The latter takes place every two years in the Grand Theater of Angers.

In September, Angers puts itself in the colors of Hook-hearts. For three days, concerts, street shows, plastic installations or the world championship of conversation take place in the streets of the city.

The Winter Suns take place from the end of November to the end of December, transporting visitors to the magical world of Christmas. Christmas market, enchanting shows, illuminations, entertaining and joyful activities, dazzle the winter of the little ones, like big ones. The Loire by bike, the bike francette. 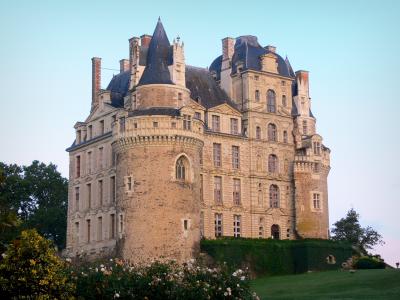 The Château de Brissac
The highest castle in France! 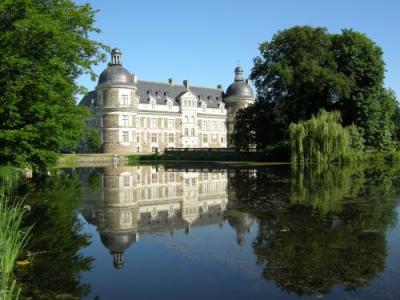 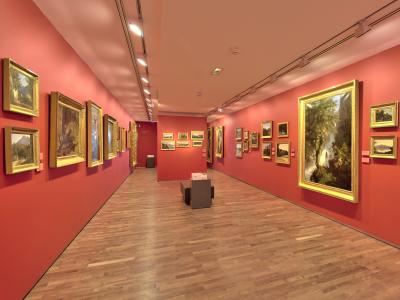 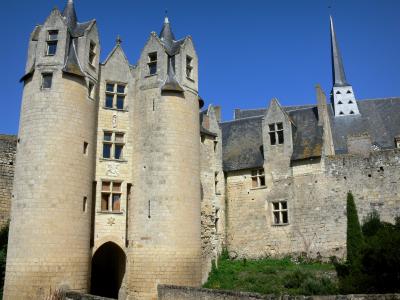 The Montreuil-Bellay castle
A medieval fortress 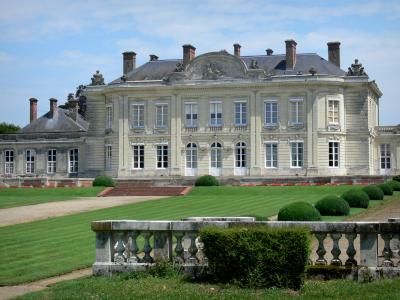 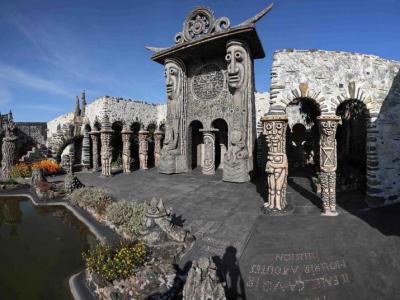 The Robert Tatin Museum
A place of astonishing art! Orient'halles
Moroccan restaurant in Angers
29 € per person
Ambassadors fans of Moroccan cuisine, we offer our guests a traditional cuisine including the famous "couscous royal" which will delight the most discerning palate. Salads, bricks, tagines, pastries and orange cinnamon are also on the card…
Located Angers away
Favourite
All restaurants around Angers 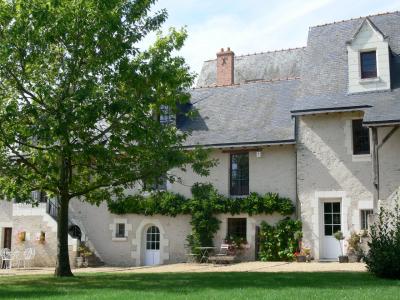 Le Logis du Pressoir
10
1
House with 3 bedrooms in Sainte-Gemmes-sur-Loire
78 € per double room
On the course of the Loire by bike and near Angers, in a quiet environment, our house of the sixteenth century, restored with the finest materials of Anjou, has 3 guest rooms carefully decorated. Its geographical location allows you to spend…
Located 6.5 km from Angers
Favourite 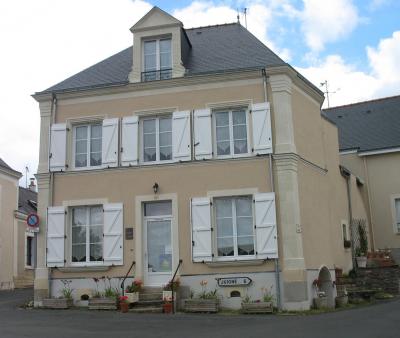 The House of Heloise
10
1
House with 3 bedrooms in Longuenée-en-Anjou
60 € per double room
17 km of Angers, towards Laval - Rennes, near the Blue Anjou, town house in the heart of the village, near the river. The House of Heloise, classified 2 ears Lodgings of France, features, upstairs, two bedrooms and a complementary "the Bengali"…
Located 13.3 km from Angers
Favourite 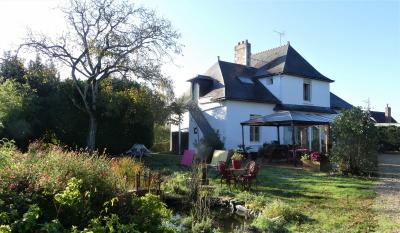 Upper anjou's hotes rooms
House with 3 bedrooms in Thorigné-d'Anjou
67 € to 69 € per double room
Close to Angers and 3 minutes from the Racecourse of the Lion of Angers, give yourself a moment of rest in one of the 3 spacious rooms, each with its own independent entrance and individual bathroom. Two rooms, one with kitchenette, can communicate…
Located 19.4 km from Angers
Favourite
All bed & breakfasts around Angers 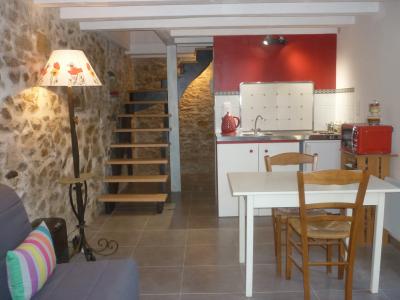 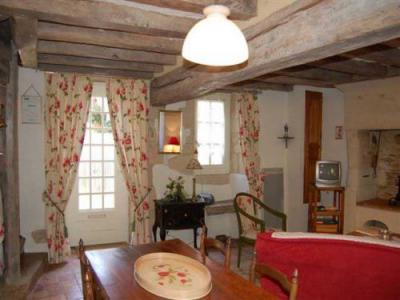 Maison de vacances Allée de l'Ermitage
9.4
5
House for 4 people in Marcé
105 m², 2 bedrooms
460 € to 530 € per week
Two-family character of the seventeenth completely renovated 105m² with beams, studs, tommettes old on 3 levels. House charm that was included in the coup de coeur site of the Loir Valley and Clévacances. Located in a village on the ground landlords,…
Located 21 km from Angers
Favourite 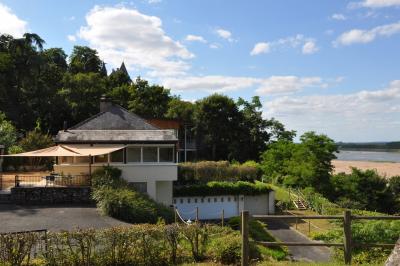 The cottage Belvedere Loire
9.5
5
House for 10 people in Gennes-Val-de-Loire
130 m², 4 bedrooms
495 € to 760 € per week
Blanche welcomes you to his house Belvedere de Loire 3 star perched on the hillside overlooking the Loire, with its panoramic view, the heart of the Anjou-Touraine Regional Park. The cottage is on one level. On the ground floor (86m²) are the…
Located 36 km from Angers
Favourite
All vacation rentals around Angers 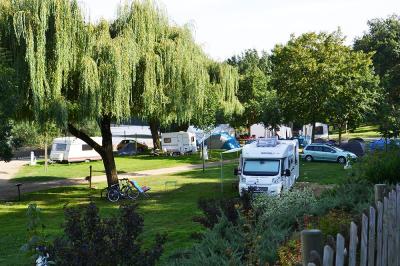 At the edge of Loire
10
1
Campsite in Gennes-Val-de-Loire
135 pitches on 3ha
13 € to 19 € per day (2 pers / tent / car)
Ideally located on the left bank of the Loire à Vélo trail between Angers and Saumur, the campsite is located in the heart of the village on 3 hectares of greenery bordering forest, river and Loire. At the foot of the campsite you can discover…
Located 29 km from Angers
Favourite 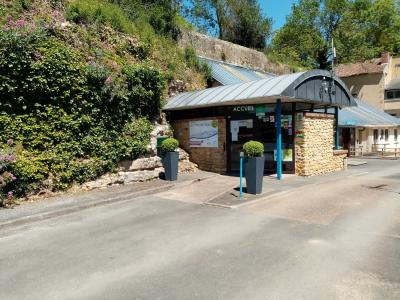 Camping Anjou Doors
Campsite in Durtal
114 pitches on 3ha
1230 € to 1440 € per day (2 pers / tent / car)
Located 1.5 km from the A11 motorway and nestled in a beautiful green setting on the banks of the Loir in Durtal, home to the famous Comtes d'Anjou Castle, the three-star campsite les Portes de l'Anjou provides you with all the comfort, peace…
Located 33 km from Angers
Favourite
All campsites around Angers 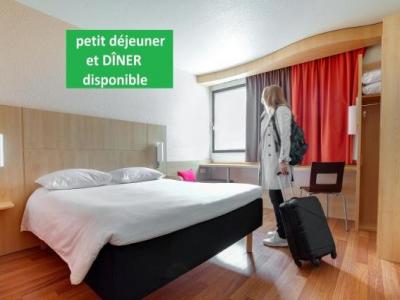 ibis Angers Centre Chateau
8.1
1140
Hotel in Angers
Room from 57 €
Located in the centre of Angers, just 300 metres from the cathedral and château, ibis Angers Centre offers a restaurant and a bar. The train station is only 1.3 km from the hotel. All rooms are air-conditioned and feature a flat-screen TV with…
Located Angers away
Favourite 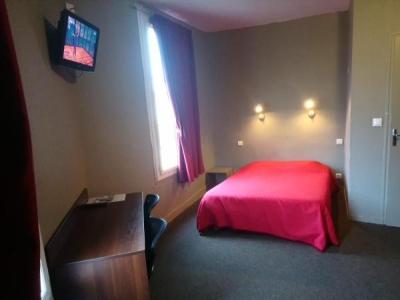 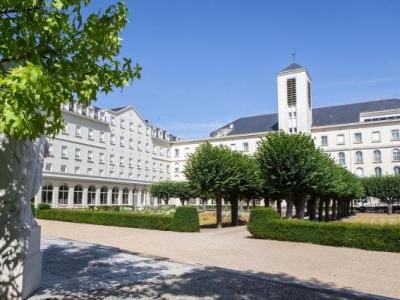