This loop around Liverdun offers a view over the entire town and alternates between passages through the forest, the town and the banks of the Moselle. 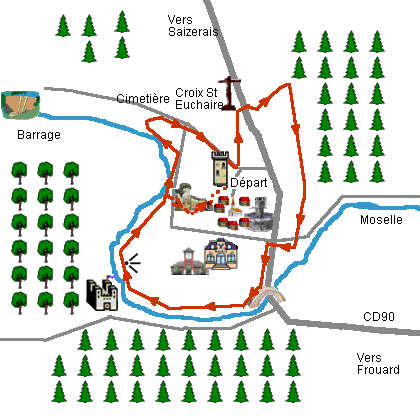 The starting point is at the upper gate which you have to pass through to enter the old town. If you continue to the church, you will find the Tourist Office opposite, which supplies a free copy of the description below with a detailed map. Parking spaces can be found outside the church and next to the upper gate.

Turn your back to the Upper Gate and walk away from the village along Avenue de la Libération. At the crossroads, leave Bel Amour Chapel on your right. As you climb, admire some of the houses building in an Art Nouveau style and, on your left, some beautiful viewpoints over the Moselle and the Aingeray dam.

When you arrive at the CD 90, you can make a detour to Saint-Euchaire Cross and then cross the road and take Chemin de Marbache on the right. There is a GR sign at the entrance to the street and after that you have to follow the yellow discs. Continue the walk by descending to a crossroads, where you should take the path on the right that heads downhill.

Opposite, between two oak trees, there is a fountain; it is from this small valley, the bottom of Peuvenelle, also called "sous pavillon" that the water tank on Place de la Fontaine used to supply water to all the upper part of Liverdun.

After following the forest on one side and "Roche Barbotte" on the other side, then passing above the exit of the old canal tunnel, you will arrive on Rue du Tir. The quarries on your left were used when the canal was built. The shooting range, which gave its name to the street, used to be located further up the valley.

At the end of the street, on your right, you will be able to consult the map showing the route of the GR5, 1978 version. Cross the Maladrerie bridge, still called the "bridge of the lazy" which, since the canal's disappearance, spans nothing more than a strip of earth. At the traffic lights, descend left along the CD past the central reserve of the old port, where barges used to wait before passing through the tunnel. Pass below the railway bridge and pass the gates of the Pont-à-Mousson factory. Then follow the indications for the cycle path and continue along the Moselle from "le gué du bac". For many long years, only one boat provided a crossing over the Moselle.

A large bend, which passes the "paquis", will lead you to the entrance to the campsite. You will be able to admire the beautiful viewpoints over the village and see the remains of the ramparts and, in particular, part of the towers which used to surround the town. From the other side of the Moselle, the view of File Castle, built in 1905, reflected in the Moselle, is an image which has inspired many artists.

After passing the campsite, the tennis courts and the football ground, you will pass beneath the railway line again. Walk past the old jam factory to the leisure area at the former sluice gates, small rapids on the Moselle before it was channelled. A secondary arm of the river used to supply the mill which has since disappeared. You can continue along the jetty and make your way to the small islands before retracing your footsteps.

Here, you have two options:

1) If you are tired, opt for the short option by taking the short climb at the stop sign, "sentier du moulin" that will lead you to Grand'Rue. To return to where you started, you can either walk up Grand'Rue or pass the butchers opposite and walk up the Cote au Lait or Laye staircase. At the top of the stairs, at the foot of Corbin Castle, Grand'Rue passes the remains of Porte en Mi Gate (which used to separate the lower town from the upper town). Turn right and pass the old municipal wash house. Take the next left at the small car park and make your way to Place de la Fontaine. Pass the arches and in between the Renaissance houses on Place d'Armes outside the church. On your right, you will see the Upper Gate and the starting point.

2) If you still have some energy, cross the leisure area to the white gate and pass the lake below the Pisuy road. The path continues behind the miniature golf and the water point with a beautiful view over the south-facing slope, which used to be planted with vines. The path leads away from the Moselle. Turn right to return to Rue du Sous-Vignal (under the vines) slightly before the cemetery. You will have passed what used to be called the Jard. You now have to climb this long slope to return to the Upper Gate, enjoying the very beautiful views over the meander in the Moselle and another part of the town's old ramparts on the way. Campsites in the Meurthe-et-Moselle
Compare reviews, photos and rates with an interactive map. Promotions and weekend offers.
See selection