Vacation rentals in the Manche
Find recommendations at the best price. Book your stay online and save money!
Plan my stay

This itinerary goes around the forest of Lande Pourrie, part of which is private and a hunting reserve. Depart from Saint-Cyr-du-Bailleul, via the D182 towards Barenton, visit the site of Montéglise Church, then take the D907 to Mortain. There, visit the small chapel and admire the panoramic view. And, do not miss the large waterfall opposite Blanche abbey. Continue towards Gers via the D157, on the way, at Placître, you will be able to visit the Regional Pottery Museum. Continue towards Ger, then Barenton, and, on the way, between Ger and Barenton, stop at Fosse Arthouron on your left, a rock climbing site with walks along its lake. On the way back, 2 km from Fosse, either turn left to Rouelley, or pass through Saint-Georges-de-Rouelley, and take the D907 towards Domfront and then turn right. Visit the Orne-style village church in Rouelley, and then continue to Saint-Roch-sur-Égrenne, a charming small village (illuminations at Christmas) with a small building on which Saint Roch is depicted, Return to Saint-Cyr-du-Bailleul via the chapel with a small steeple restored by the village carpenter. 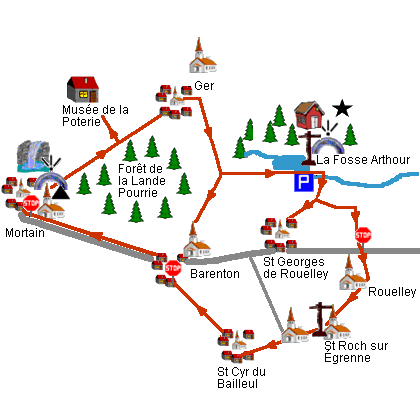 Starting point in the centre of the commune of Saint-Cyr-du-Bailleul.

Depart from the centre of Saint-Cyr-du-Bailleul and follow the D182 to Barenton, where you can visit Montéglise Chapel. Continue towards Mortain via the D907. Visit the small chapel which can be accessed along a line of fire trees, offering a clear view over the entire valley, from where, on a clear day, you will see Mont-Saint-Michel. Continue towards the magnificent, large and very popular Cance waterfall (a tributary of the Sélune), with a twenty-metre drop, where you can admire its natural setting, its rhododendrons which bloom in May and at the start of June; walk down the staircase to the waterfall and enjoy the beautiful view.

After this walk, you will find yourself outside Blanche Abbey. Founded in 1105 by Adeline, Saint Vital's sister, the abbey owes its name to the colour of the gowns worn by the nuns who used to live there. The abbey church, cloister, refectory, with its well, pantry, a complex with 300 windows housed a small seminary up until 1906, and then a holiday centre and a hospital from 1914 to 1916; for several years, it also housed the Community of the Beatitudes. To continue the outing, set out towards Ger, via the D157.

Follow signs to the Pottery Museum in the village of Placître, a very beautiful museum where a complete potters' village has been recreated, period ovens can also be seen there. Follow the road to Ger, then continue towards Barenton for 5 km and turn left towards the Fosse Arthour, as indicated on the signs.

The site of Fosse Arthour with its lake situated at the edge of the forest is also a site of legends: the legend of King Arthur. This rock-climbing site is one of the most popular in the region with 120 identified routes. At this natural site, it is also possible to enjoy refreshments at the Auberge de la Fosse. Turn left as you leave the site and continue for 1.5 km, turn left again and make your way to Rouelley. You have to cross the main road to reach the village 50 metres from the road. Admire its church and then make your way to Saint-Roch-sur-Égrenne, a small village with a small rock on which Saint Roch and his dog are depicted. Continue along this road to the small chapel which stands in the middle of a crossroads. Its roof and small steeple were restored in 2011 by a tradesman from Saint-Cyr-du-Bailleul. Return to Saint-Cyr. This is the end of the itinerary.