Vacation rentals in the Lot-et-Garonne
Find a great selection of ideas for your holidays! Get inspired and compare offers.
Plan my stay

Cancon, towards Moulinet, on the trail of local produce... Hiking and gastronomy go hand-in-hand on this circuit through the plum and hazelnut orchards The plums are processed at the Lamouthe drying cooperative which also sells products made with hazelnuts; cold meats locally made at Terreblanque, etc. The walk is 16.4 km long. You should count on 4:30 mins on foot, 2:50 mins on horseback, 2:10 mins by mountain bike. You are 20 km north of Villeneuve-sur-Lot along the N21. 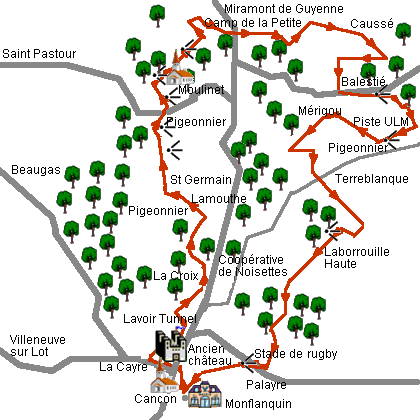 Starting point: car park at Cancon Town Hall. Carry some water and binoculars. The marking is yellow. This walk is available for download on the site of the Lot-et-Garonne Departmental Tourism Committee.

With your back to the town hall, make your towards Castillonnès along Rue du Marche for about 60 m. Turn on to Rue de la Pie qui Chante. Take the stairs that pass above a well. Cross the N 21 with care. Climb up Rue Porte de la Ville opposite. Follow successively Rue Basse, Place des Marronniers and Rue Porte Fausse. Climb right up towards the viewpoint over the mound of the old castle. Descend on the left to the foot of the ramparts, surmounted by an old tower, the sole remains of the castle. At the end of the path, walk a short way along a road on the left and turn right down a shady path. Take the road that leads down on the left, then follow a grassy path below. Pass through a stone tunnel. After the wash house, take the road right via Chanteclair. At the junction, take care as you follow the D124 for about 280 m.

At the Lamouthe sign, turn left on to the cul-de-sac. Veer right at the foot of an earth mound planted with plum trees. Make your way around the Unicoque buildings on the left. After the hangar of Lamouthe farm, turn left down a stony path. Cross the embankment between the two lakes. Turn right along the lake downstream. Before the embankment, turn left on to a grassy track between two fields. At the crossroads, follow another grassy path opposite. Walk along a hedge.

Cross a road (view over Moulinet on the right). Take the grassy path opposite. Follow the winding road on the right via Ginestet (dovecote) and Lachapelle (well and lake).

Cross the D 206 and follow it on the right taking care. Turn left on to a large stone path (old tramway line). Climb up a small road on the right (large grassy verge). Turn left towards Penchenat. At the bottom, at the crossroads between three paths, turn right along the Tolzac de Mangane.

At the bridge, cross the D 124 and follow it for about 270 m. After the vineyards, make your way towards Camp de la Petite, Causse and Péries. About 200 m after the Causse gate, descend on the right. After the isolated house, continue straight ahead along a grassy path. Cross a concrete bridge and turn left. At the top of the plum orchard, take the ridge road on the left. Opposite the Paga house, turn right into a forest along a dirt track. In front of a dovecote, veer right on to a path, which is slightly hollowed out on its second part. On the way out of the wood, descend into a field.

Pass the farm Chez Sylvain Jaffrenou on the right (locally produced meat). Follow the road that climbs up on the right. On the first bend, turn left on to a sinuous path. Enter the wood along a winding path. Take the road on the left. At the junction, continue towards Labarrouille (or La Barrouille, two different ways of writing this name). At the junction between the three roads, continue towards Barrouille Haute. After a small mound, descend right on to a stony path towards a pine forest. Veer left along the edge of the forest. Follow a hedge, then turn right. Veer left in front of another hedge. Pass between two hazelnut groves. Cross a chicane and descend on the right. Turn left and then immediately right on to the street that passes the swimming pool. Walk around the rugby stadium. Follow the grassy strip of ground planted with plane trees alongside the N21. Cross this road over the pedestrian passage. Take the street opposite. Follow Rue de la Briotte on the right, then Rue des Ecoles on the left and continue to the Place de la Mairie.

Legends and superstitions... Very few fruit trees have been such a source of superstition and popular beliefs as the hazel. It is the tree of science, knowledge and wisdom. For Celtic civilisations, it was a magical tree. Sleeping in the shade of a hazel provoked prophetic dreams. The wood of the hazel was used to make royal sceptres and magic wands or divining rods and fairy wands. Nowadays, some water diviners still use hazel rods to find underground springs. Hazel is the quintessential wood used for walking sticks and staffs. The stick of Thor, the son of Odin. Mercury received a hazel stick from Apollo. He used it to improve the virtues of men and to calm their powerful passions. This stick, the caduceus, surrounded by two snakes and surmounted by two wings, has become the emblem of doctors. Résidence Columba - Apparts meublés Agen Sud
Résidence Columba is a student residence located a 5-minute drive from the centre of Agen, 750 metres from Armandie sports stadium and the exhibition centre, and less than a 15-minute walk from River Garonne. It…
More information