Campsites in the Rhône
Compare reviews, photos and rates with an interactive map. Promotions and weekend offers.
View offers

Vernaison is a commune in the Rhône, in the Auvergne-Rhône-Alpes region, 15 km south of Lyon.

Its relatively modest territory of 4 km² runs along the right bank of the Rhône, facing the islands of the Round Table and the Goat, which certainly do not belong to the locality but contribute to composing a bucolic landscape and rich biodiversity. On the west of the town, hills dedicated to agriculture dominate the valley and the village.

Already occupied during Prehistory and then in Antiquity (then a stage on the Roman roads linking Lyon to Narbonne or to the Dauphiné), the village developed thanks to the monks of the Ainay de Lyon abbey in the Middle Ages then, from the 15th century, citizens of Lyon settled there. The activity of the inhabitants diversifies over the centuries: farmers then wine growers at first, they are then employed in the industry of so-called "Indian" fabrics. In the 19th century, the economic boom was accompanied by that of river transport and until 1840, when the railroad was essential, Vernaison was a first-rate river port. Finally, in 1902, the village experienced an upheaval with the construction of a suspension bridge (then one of the most remarkable in Europe) spanning the Rhône and, on another level, became famous for its chocolate factory which would close its doors in the 1960s.

Its heritage, its environment linked to the river and its leisure offer make Vernaison, which now has nearly 5,000 inhabitants, a pleasant stopover near the Lyon metropolis.

Campsites in the Rhône
Compare reviews, photos and rates with an interactive map. Promotions and weekend offers.
View offers

In terms of heritage, it is its treasure discovered in 1856 consisting of axes, knives and objects dating from the Bronze Age which is the oldest element. It is now kept at the Fourvière museum in Lyon.

More recent, are to be seen in the town, its church built in 1869 which replaced a Romanesque building, nineteenth century pavilions and buildings with their parks and water bodies (Cornevent pavilion, Enchanted Lake park, domain of the Water Fairy, all listed in the Inventory) but also the remains of the ferry that made it possible to cross the river before 1902. That year was inaugurated the 3,900 m long suspension bridge, whose towers, at foundations cast by compressed air, were made of concrete, but it was destroyed in 1940 during the retreat of the French troops. The ferry returned to service for a while, then a second bridge was inaugurated in 1959, but it could no longer be described as revolutionary like its predecessor.

Finally, still on the river side, we notice a sculpture that evokes nautical jousting, a sporting hobby of which Vernaison was for a long time a stronghold…

As far as cultural leisure activities are concerned, activities (meetings, readings) are offered regularly at the media library (contact on +33 4 72 30 10 78).

For sports and "nature" recreation, it is possible to book a tennis court at the local club (call +33 9 73 69 26 07). However, it is the Charly-Vernaison course developed in connection with the neighboring locality which is the main asset of the municipality. It is made up of itineraries allowing you to discover and appreciate the landscapes of the villages and the banks of the Rhône. They are signposted, dotted with information panels and three in number. The first, the course of the pond, is 3.2 km long and is mainly dedicated to the work of arborists. 3.3 km long, the route of the plateau is centered on the landscape contrasts between hills and banks of the Rhône. Finally, a circuit is dedicated to the heights of the two villages, 5 km long.

Obviously remains the potential of the islands and the route traced along the river where you can reach the ViaRhôna, a route reserved for soft mobility linking Lake Geneva to the Mediterranean! A paradise for pedestrians or cyclists and the best way to appreciate the landscapes of the valley. Maps and information on +33 4 72 77 69 69 or +33 4 72 30 50 00.

All leisure activities around Vernaison Chez Carole & Lionel
9.9
18
House with 2 bedrooms in Reventin-Vaugris
69 € per double room
Our house is an old farmhouse completely renovated. With a total surface area of ​​more than 300 m², built of stone and adobe, it is located on a closed and raised ground of 650 m ². In the countryside, quiet, with a large terrace facing south…
Located 17.7 km from Vernaison
Favourite 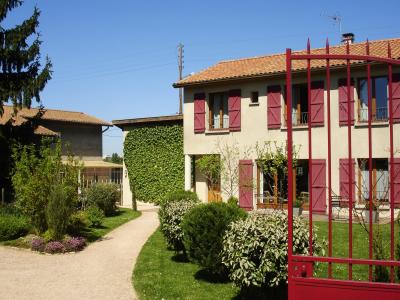 Biscotte B&B
9.7
5
House with 0 bedrooms in Décines-Charpieu
Biscotte is an independent house in a hamlet on the outskirts of lyon-Est, at the edge of the fields and 2 steps from the main roads. Garden side : 4 quiet and sunny rooms Labelled CléVacances (large beds, bathroom showers, tv, free WiFi). Living…
Located 18 km from Vernaison
Favourite 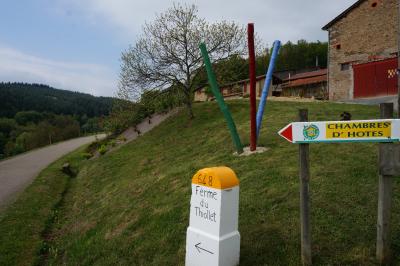 Bed and Breakfast of farm Thiollet
House with 4 bedrooms in Montromant
66 € to 76 € per double room
On a map, our farm is a small tiny dot. We live and work in this small space of Europe we want to open to the world. Symbolically, so we called our rooms named four distant continents. "Africa" ​​is full of crafts and pictures - "America" ​​more…
Located 20 km from Vernaison
Favourite
All bed & breakfasts around Vernaison 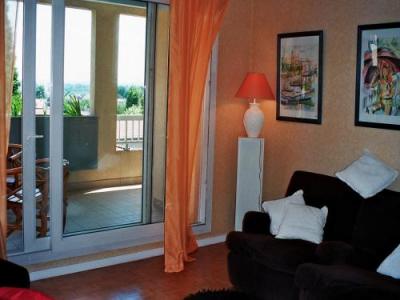 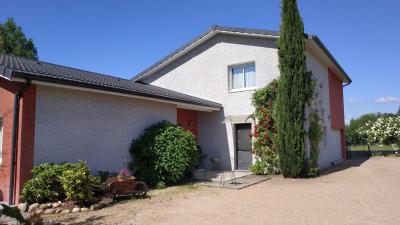 Gîte La Clé des Artistes
9.5
45
Apartment for 6 people in Saint-Genis-Laval
60 m², 2 bedrooms
550 € per week
If you want to relax in a quiet and relaxing, discover our cottage on the 1st floor of a new house. The property of 3600 m² located in a residential area offers contact with animals from the neighboring field (ponies, horses, chickens..) and…
Located 6.9 km from Vernaison
Favourite 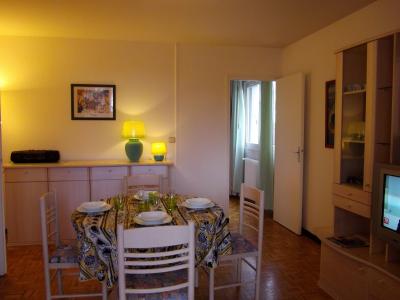 The laricio - the pines of the camille -
10
2
Apartment for 4 people in Oullins
52 m², 1 bedroom
435 € to 465 € per week
Very close hospital Lyon-South - flat of 52 m ² + loggia in a park. Private parking and visitor parking - On the 2nd floor, with elevator, 6 km from lyon. Living room - bedroom - independent kitchen - Bath with if necessary rotating chair -…
Located 7.5 km from Vernaison
Favourite
All vacation rentals around Vernaison 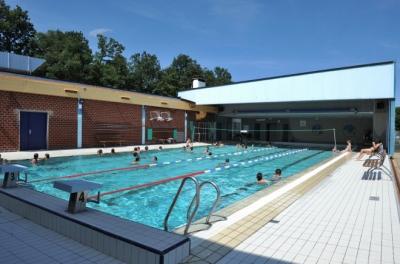 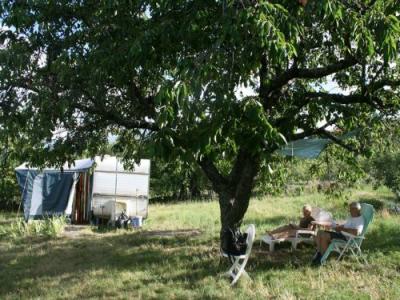 Aire naturelle de camping les cerisiers
9.5
6
Campsite in Maclas
10 pitches on 1ha
19 € per day (2 pers / tent / car)
Natural camping area 'The Cherry is a very natural camping with over 500 plant species Maclas located in the department of the Loire. With stunning views across the Alps, our location in the heart of the Parc Naturel Régional du Pilat is an…
Located 32 km from Vernaison
Favourite 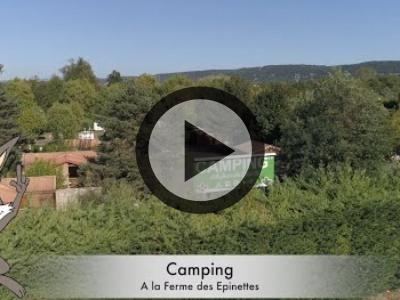 Camping "At the farm Epinettes"
9.9
3
Campsite in Saint-Romain-de-Jalionas
28 pitches on 2.5ha
1080 € to 1440 € per day (2 pers / tent / car)
Pt'it a green area near Lyon, family friendly campground run by Alain and Benedicte, where it is good to stop. Location spacious shaded. Pitches, rental mobile chalet motel room, unusual accommodation… At night, a week, or more, always a solution…
Located 34 km from Vernaison
Favourite
All campsites around Vernaison 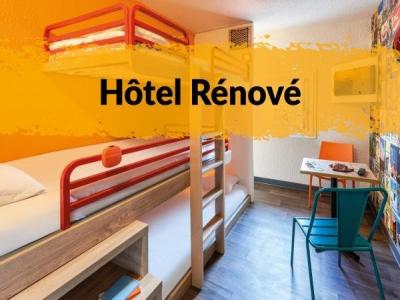 hotelF1 Lyon Solaize Rénové
5.9
618
Hotel in Solaize
Room from 28 €
hotelF1 Lyon Solaize Rénové is located in Solaize, 16 km from Lyon and just a 2-minute drive from A7 highway. Free WiFi is included. Every room at this hotel is air conditioned and comes with a flat-screen TV. All rooms have access to a shared…
Located 1.3 km from Vernaison
Favourite 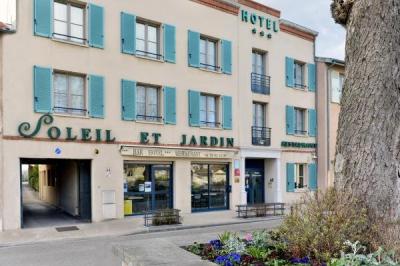 Soleil et Jardin
8.5
490
Hotel in Solaize
Room from 89 €
Soleil et Jardin Hotel is located in the village of Solaize, 13 km away from Lyon. It offers 3-star accommodation with free WiFi. Entirely air conditioned and soundproofed, the rooms at Soleil et Jardin feature a flat-screen TV with cable channels…
Located 2.3 km from Vernaison
Favourite Residence Le Louvre
7.8
28
Hotel in Saint-Symphorien-d'Ozon
Room from 80 €
Located 15 km from Lyon and the train station, Residence Le Louvre offers guest rooms and self-catering studios in a residence with a garden, a terrace, and a restaurant. WiFi is free of charge in the entire property. Free private parking is…
Located 3.7 km from Vernaison
Favourite
All hotels around Vernaison