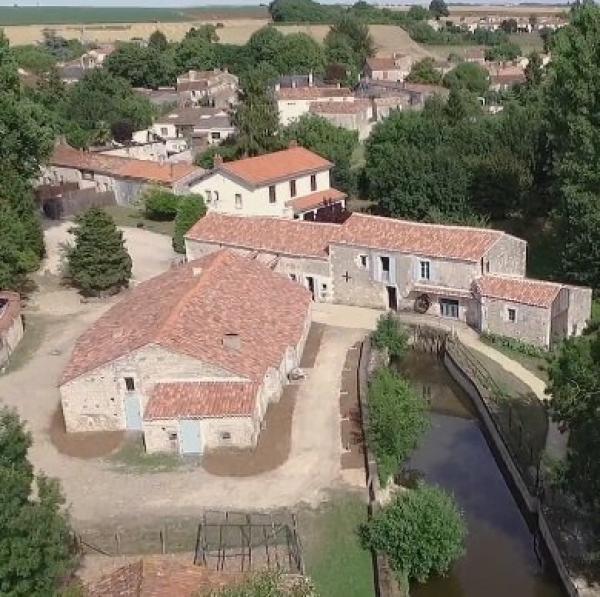 7 days of French free of charge!
Learn French online with a fun daily personalised course by email. Get one week free starting from today!
Sign me up
Nieul-on-l'Autise:

Nieul-sur-l'Autise is a village of Vendée, Pays de la Loire region, bordering the department of Deux-Sèvres and located 12 km southeast of Fontenay-le-Comte.

If traces of Neolithic settlement and then of human activity in the Gallo-Roman period have been uncovered on the territory, the history of the locality is essentially linked to the establishment in the 11th century of an abbey which benefited protection of the Counts of Poitou and Dukes of Aquitaine. The religious participated in the development of the Marais Poitevin. The abbey pays a high tribute to the Wars of Religion but the abbey, the cloister and convent buildings are preserved. The whole remains to this day a pole of tourist and cultural attractiveness major for the locality, which benefits from the label "Small city of character".

Nieul-sur-l'Autise, which has about 1,300 inhabitants and an activity area, puts its historical and natural heritage forward, for the pleasure of visitors and vacationers.

Gate of the Marais Poitevin.

Seat of the Community of Communes Vendée Sèvre Autise.

It is logically the abbey dedicated to Saint Vincent, founded in 1068, which constitutes the major heritage element of the locality. Eleanor of Aquitaine, who would have been born there in 1122, granted him the status of royal abbey. Ruined after the Wars of Religion, it was abandoned by the monks and the Revolution, lands and buildings were sold as National Properties. However the abbey is one of the few monastic ensembles of the Romanesque period in the region having preserved an abbey, a cloister with its four galleries and almost intact buildings. Classified as a Historical Monument since 1862, bought in 1968 by the department, it is restored and enhanced. The site visit is done in two stages. The guided discovery of the abbey and buildings first, then a free visit of the adjoining houses as part of a scenography and interactive terminals allowing everyone to know the history and operation of an abbey. Open every day from April 1st to the end of September, every day except Tuesday from October to March. Closed the last three weeks of January. Entry: from 4 to 6 euros. Information on +33 2 51 50 43 00.

Once visited this masterpiece of French Romanesque art, we continue in a different but equally significant history with the Maison de la Meunerie, a heritage building formed around a mill erected on the course of the Autise in 1728 and which was the subject of a restoration in the 1990s. The visit includes the discovery of the mechanics of the mill (large paddle wheel, flint wheels), the manufacture of flour according to the ancestral methods, and the reconstituted dwelling of a miller and his family in the nineteenth century. The free-range visit is animated by a playful scenography (Suzanne looks for her cat in the different parts of the site and goes to meet the characters who lived there). Demonstrations, animations and workshops (on the themes of milling and bread) frequent, especially in July and August. Note that the Maison de la Meunerie manufactures its flour during its opening season. Open from 14h to 18h Wednesday to Sunday from early April to early November and every day from 10:30 to 12:30 and from 14h to 19h in July and August. Entry: 3.50 and 5 euros. Information on +33 2 51 52 47 43.

The Chateau du Vignaud, dating from the First Empire, is also worth a look. We will particularly appreciate the shaded park of 4.5 hectares along the river. It is now a reception center with accommodation. Information on +33 2 51 52 43 38.

The historical tour of Nieul-sur-l'Autise is rounded off with the Champ Durand neolithic camp discovered in 1971. Protected by enclosures and ditches, the 3-hectare site probably housed a place of trade and commerce. housing... Accessible via adapted signage, the camp is visited through information panels punctuating this amazing testimony of the lives of our distant ancestors who lived in these places a few millennia before our era.

For walking enthusiasts, a discovery trail linking 21 sites, buildings or places presenting the most interesting elements of the heritage of the locality has been developed. Educational signs or panels are installed in front of or near each of them. Leaflet and information at the town hall, and +33 2 51 52 40 12.

At the margins of the marsh domesticated over the centuries, Nieul-sur-l'Autise and its surroundings are also conducive to many hikes to apprehend a unique historical and natural heritage. Trails and circuits to go on foot or mountain bike or even horse were designed. Maps, brochures and information on +33 2 51 47 88 20.

For the curious: a mausoleum.

To see: a small private museum at the mill of Pacouinay.

On the weekend of Pentecost, the Feast of the Milling on the site of the old mill offers many events on the history and local traditions but also concerts in a friendly atmosphere.

As part of the festival Nights Musical Vendée romane (from early July to mid-August), a concert is always held at St. Vincent Abbey in the evening (jazz, classical music or song).

July 14, garage sale and market producers and artisans in the park of the castle of Vignaud. 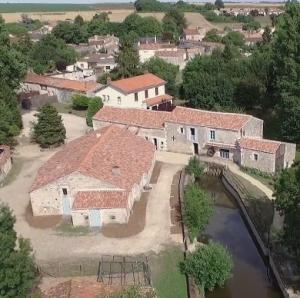 House of the Milling
See photo 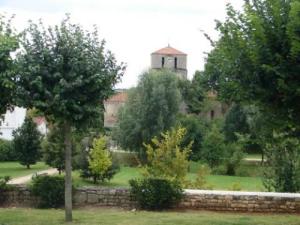 Oulmes - The church from the garden
See photo

Visit of the Marais Poitevin.

All leisure activities around Rives-d'Autise 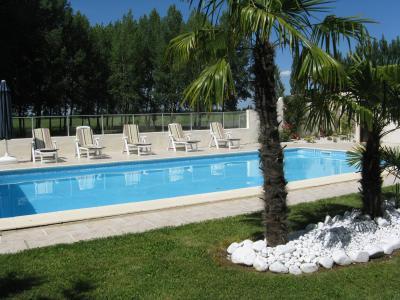 The Bas des Vignes
9.7
31
House with 2 bedrooms in Vix
60 € per double room
At the heart of the Marais Poitevin "Le Bas des Vignes" is the ideal place to rest in a haven of greenery and calm. Our farmhouse, stone house, typical of the marsh, dates from the 19th century. The South Vendée enjoys a warm and sunny microclimate.…
Located 10.2 mi from Rives-d'Autise
Favourite La Lucarlière
8.8
9
House with 5 bedrooms in Saint-Cyr-des-Gâts
55 € to 75 € per double room
Quietly in the countryside, in town for 3 luxury rooms, including a more 5 people. (3 ch. Airconditioned) - Dining room with kitchen available. Entry independent Internet access. Fenced to 3 hect. With animals - Games - Billiards -
Located 14.1 mi from Rives-d'Autise
Favourite
All bed & breakfasts around Rives-d'Autise 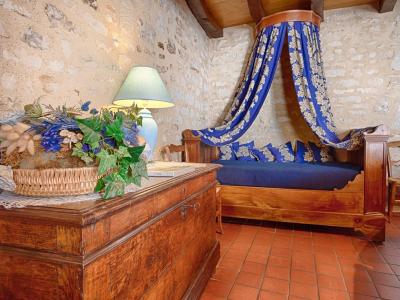 Gite de la Gravée
SPECIAL OFFER
9.8
7
House for 4 people in Saint-Michel-le-Cloucq
100 m², 2 bedrooms
360 € to 705 € per week
Set in Vendée between Marais Poitevin and Puy du Fou, and not far from the Atlantic coast, the cottage of Engraved, 3 stars and 3 stars, for 4 people is an old house with character, fully restored and furnished in the style Vendée. Charm old…
Located 5.4 mi from Rives-d'Autise
Favourite 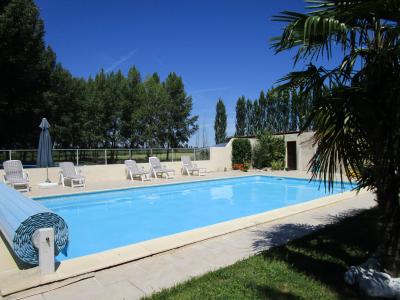 Lodging " Le Bas des Vignes "
9.6
18
Apartment for 4 people in Vix
35 m², 2 bedrooms
350 € to 500 € per week
Located in the heart of the Marais Poitevin "Le Bas des Vignes" is the ideal place for lovers of calm, greenery ! It is a renovated farmhouse on three hectares with poplar, pond, heated swimming pool. All our animals Quad horse, donkey Kalou,…
Located 10.2 mi from Rives-d'Autise
Favourite
All vacation rentals around Rives-d'Autise Camping over the fisherman
NEW
Campsite in Le Mazeau
56 pitches on 1ha
1350 € to 15 € per day (2 pers / tent / car)
Located in the heart of the Marais Poitevin surrounded by green Venice, Patricia and François welcome you to Camping Fisherman Relay for an enjoyable stay in a haven of peace. Guest and family campsite *** located 500 meters from a pier and…
Located 6.5 mi from Rives-d'Autise
Favourite 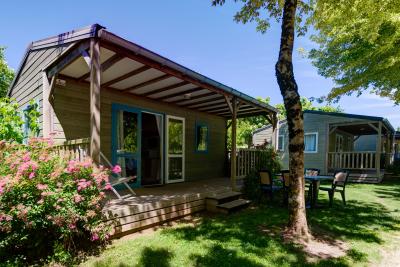 Camping Green Venice
Campsite in Coulon
120 pitches on 2ha
15 € per day (2 pers / tent / car)
At the heart of the Marais Poitevin classified site, the richness of the regional park is offered to you! Our family campsite of 100 pitches and 20 rentals, open from April 4 to 10 October. Located in the small village of Coulon you spend relaxing…
Located 8.2 mi from Rives-d'Autise
Favourite Camping island of Chail
Campsite in Sansais
86 pitches on 2.5ha
12 € to 16 € per day (2 pers / tent / car)
Camp at the heart of nature! Opt for the privilege of a location at the waterfront offered throughout the campsite to enjoy an exceptional setting. The campsite the Island of Chail covers 2 hectares, you will find 86 pitches, all serviced with…
Located 9.4 mi from Rives-d'Autise
Favourite
All campsites around Rives-d'Autise 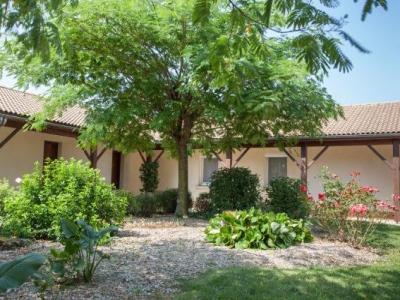 Citôtel Les Eleis
8.0
130
Hotel in Saint-Martin-de-Fraigneau
Room from 65 €
The Citôtel les Eleis is situated 3 km from Fontenay-le-Comte, in the south of the Vendée Region. Each guest room has a private bathroom, Canal + TV and free Wi-Fi. Guests of the Citôtel Les Eleis can enjoy traditional family cooking in the…
Located 3.7 mi from Rives-d'Autise
Favourite 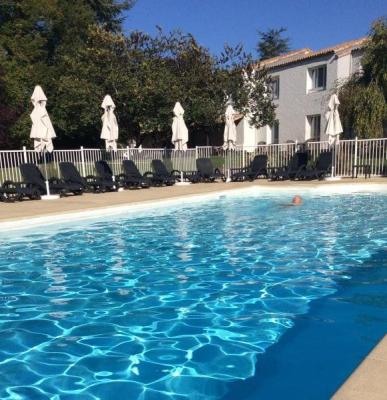 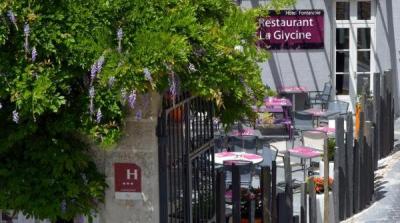 Logis Le Fontarabie
8.4
291
Hotel in Fontenay-le-Comte
Room from 67 €
Located in the city centre of Fontenay-le-Comte, this former post-house dates from before the time of King François I. Free WiFi and free private parking are offered at Le Logis Fontarabie. All rooms comes with a TV, a telephone and a private…
Located 6.4 mi from Rives-d'Autise
Favourite
All hotels around Rives-d'Autise