Raulhac is a commune in the Cantal in Auvergne region Rhone-Alps, 17 km south of Vic-sur-Cere.

Its territory of about 17 km² borders to the east of the department of Aveyron and ranges from 539 to nearly 1,000 m. It belongs to the historic region of Carladès, in west-central Massif Central, which was the Viscount of Carlat (hence its name), one of the subdivisions of the county of Auvergne.

Crossed by the Goul valley, the town consists of slopes facing south, giving it a softer climate.

Occupied since prehistoric times (flint extraction workshops and tool size were unearthed) and in antiquity, Raulhac was then composed of fiefs and properties that shatters over the centuries. At the heart of the Viscount of Carladès which will be owned by the Grimaldi family from 1643 Louis XIII donation in appreciation of support during the war with Spain, the village was formed around the year one thousand.

Several large families like the Armagnac and the Bourbons were the lords, and many castles still visible today bear witness to the past wealth of the territory. The center has preserved a picturesque heritage which justifies the label of Small City of Character awarded Raulhac.

Although victim of the rural exodus (about 300 inhabitants now against more than 1,000 in the nineteenth century), the village as the hamlets, their heritage and their environment warrant a step, especially as the animations are numerous (festival festivals, markets).

In the same town, the Saint-Pierre is a reflection of the rich history of the town.

The building dates mainly from the fifteenth century, although one column and masonry elements back to the twelfth. The church was also restored after the wars of religion and the nineteenth century.

Romanesque portal is observed and sculpted arches under the tower of square tower with a tower with six sides and, inside, a nave with four bays. At the level of the nave keystones like paintings of the vault of the choir, but also of the side chapels and the porch, medallions, weapons and coats of arms relate to various lords and families that have dominated the stronghold in the Middle ages and under the old regime.

Protected as historical monuments, also houses a church pulpit dated 1780, altarpieces seventeenth representing "the Education of the Virgin" and "Adoration of the Magi" and a pretty Pieta.

In the village again, the old houses in schist or basalt with tiled roofs have a quaint charm and some private houses even more give character and authenticity to the city: that of Vitrac with its vaulted rooms on the ground floor the fifteenth century, that of Mayonne with its timbered wall and Renaissance openings or that of Bonal whose angles were raised with imposing long basalt barrels of 2 meters.

The discovery of the heritage continues with the many castles built along the Goul valley and the lines of communication, according to the hamlets.

It begins this "circuit" with the castle Messilhac which dominates the valley, overlooking the volcanoes of Auvergne. Built in the twelfth century, it was remodeled in the sixteenth in a Renaissance teeming exemplary references carved in local history, especially in the magnificent facade. A visit to discover interiors that time has altered nothing in: the case of the former stately room in the dungeon, the guards room in the main building, which connects the rest two dungeons with its frame in chestnut of the sixteenth century, or of said chamber of Queen Margot, which was housed in these places when residing in Carlat, she came to visit Margaret Saunhac, wife of the Governor of Upper Auvergne and leader royalist party in the region. Open daily from 15 June to 31 August. Price: 5 and 7 euros. Information +33 6 72 71 79 85.

Also private, other castles is not unfortunately visit, but they can be observed from the outside. These include the Castle of the Mas de Raulhac (thirteenth bases and revisions), Castle Cropières that of Courbelimagne Manor Valduchez (seventeenth, two towers flanking a main building of classic style).

Rest Puechmouriez tower, the remains of a large castle of the thirteenth century which deteriorated in the seventeenth. The site was acquired for a symbolic franc in the town in 1992 and securing a long campaign and restoration was initiated.

Regarding sports and "nature" leisure, number of routes and hiking trails including the historic and natural sites of the territory, allow to combine pleasure of walking and remarkable panoramic landscapes of the surrounding peaks. Routes can join loops traced throughout the Carladès. Finally, note that in winter, some walks gagent to be performed in Nordic skiing. Maps and information +33 4 71 47 58 68

Fishing enthusiasts, meanwhile, will find with the Goul enough exercise their favorite sport. Information at +33 4 71 47 52 58. 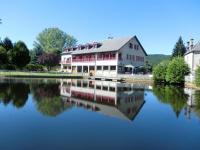 Le Lac Des Moines
On the edge of Lac des Moines, this hotel is set in the very heart of Auvergne Regional Park. It offers panoramic views of the surrounding 17 hectares of countryside. Le Lac Des Moines features rooms with a TV and…
More information

Le Lac Des Moines
On the edge of Lac des Moines, this hotel is set in the very heart of Auvergne Regional Park. It offers panoramic views of the surrounding 17 hectares of countryside. Le Lac Des Moines features rooms with a TV and…
More information

In July and August, local markets held regularly in the town.

The first weekend of October, feast of the pie with hiking tome "flavors and heritage", tastings and market local, fun activities and music.

All leisure activities around Raulhac

Hôtel Restaurant Bel Horizon
French cuisine restaurant in Vic-sur-Cère
36 € per person
At the heart of the volcano park of Auvergne, in an idyllic and peaceful, the Bel Horizon welcomes you to a true gastronomic experience. The large bay window overlooking the valley and the new decor and elegant charm you. In the kitchen,…
Located 8.7 km from Raulhac
Favourite

Campanile Aurillac
French cuisine restaurant in Aurillac
22 € per person
The Campanile of Aurillac at the foot of the Cantal mountains in a small sedimentary basin. The hotel welcomes you in a warm atmosphere and offers an interior with more contemporary lines. Bright space, tables and chairs to the very modern…
Located 17.1 km from Raulhac
Favourite
All restaurants around Raulhac 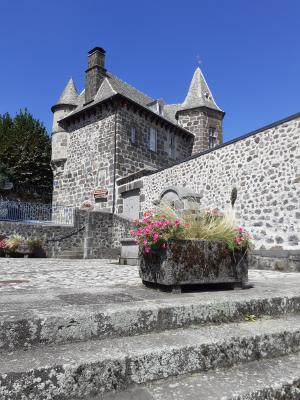 Maison du Chevalier des Huttes
10
5
Manor with 3 bedrooms in Vic-sur-Cère
145 € to 175 € per double room
Karine welcomes you together with Angelo at the Maison du Chevalier des Huttes, one of the emblematic historical buildings of Vic sur Cère - a green nature resort located in the heart of the Cantal, with the comfort and friendliness of a house…
Located 9.3 km from Raulhac
Favourite 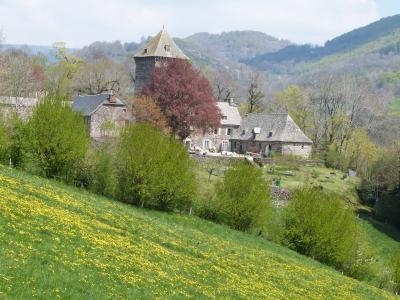 Château de Lescure
10
1
Castle with 3 bedrooms in Saint-Martin-sous-Vigouroux
90 € per double room
A tower of the Middle Ages up to the foot of the Cantal Mountains. Three bedrooms, two en suite. In turn they vaults to 4 m 50 with intersecting ribs and communicate via a spiral staircase in the corner of the walls that have 4 meters thick.…
Located 12.9 km from Raulhac
Favourite Le Clou Bed and breakfast
House with 4 bedrooms in Thiézac
68 € to 75 € per double room
Do you enjoy hiking in the mountains or adventurous hikes ? Come and stay at Le Clou - a charming mountain house with spectacular views of the valley. We are located at 1098 m altitude along the gr400 in the volcanic mountains of Cantal. In…
Located 14.6 km from Raulhac
Favourite
All bed & breakfasts around Raulhac Le gîte de Pailhés
9.1
4
House for 9 people in Pailherols
105 m², 4 bedrooms
450 € to 700 € per week
This house typical of the traditional home has been meticulously restored to retain the imprint of its history. Near the ski cross country skiing and hiking trails, 1 km from the village (known restaurant) you will be quiet. Garden, terrace,…
Located 6.6 km from Raulhac
Favourite 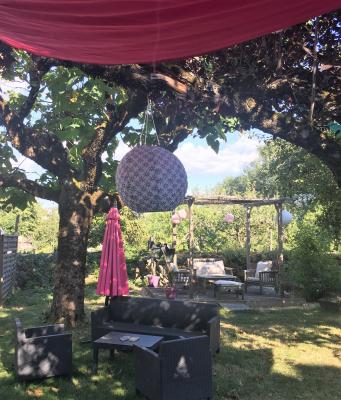 The large gite destination aubrac
10
2
Villa for 38 people in Lacroix-Barrez
750 m², 17 bedrooms
2500 € to 3800 € per week
Our lodging in free management is the former Bar hotel Restaurant of the village it can welcome groups of 20 to 40 people between mounts of Cantal and Aubrac. The renovated and refurbished building retains its atypical style with a real bar…
Located 13.5 km from Raulhac
Favourite 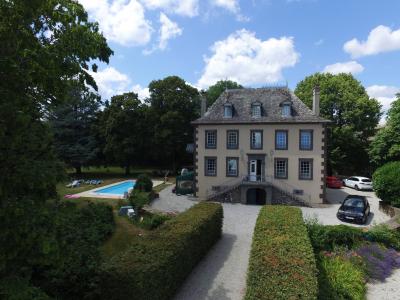 Le Bourg
Manor for 12 people in Lacroix-Barrez
260 m², 6 bedrooms
2800 € to 3500 € per week
Manor House - Close to Lacroix Barrez, on the Carladez, you will find, in a large park planted with trees and flowers, 2.5 hectares, with a heated swimming pool, a large path that will take you to the front steps of this beautiful French manor.…
Located 13.7 km from Raulhac
Favourite
All vacation rentals around Raulhac 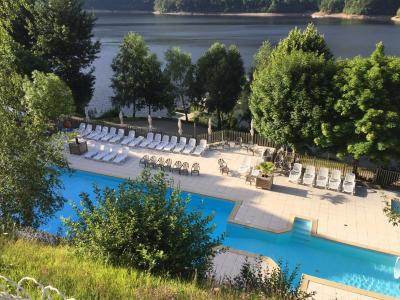 Airotel Camping La Source
10
2
Campsite in Thérondels
101 pitches on 5ha
13 € to 15 € per day (2 pers / tent / car)
A unique and atypical setting with direct access to Lake Sarrans. On a site classified and saved, come and enjoy part of the peninsula just for you. On the lake, with a southern exposure, and breathtaking views, come and enjoy a deserved holiday.…
Located 10.3 km from Raulhac
Favourite 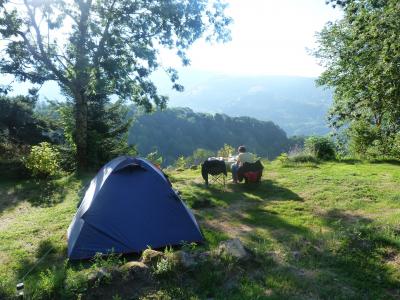 Le Clou - Camping, bed and breakfast and cottages
10
2
Campsite in Thiézac
4 pitches on 1ha
18 € per day (2 pers / tent / car)
Small quiet campsite directly at the Monts du Cantal 6 km from the village Thiezac. Perfect for lovers of nature, hiking and biking., Service of bread (baquette) in July and August. In the camping building there is a refrigerator and a microwave.…
Located 14.6 km from Raulhac
Favourite 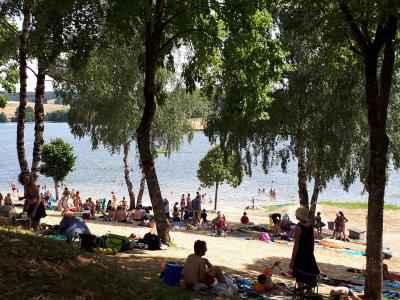 Camping Lake Saint Gervais
10
1
Campsite in Saint-Symphorien-de-Thénières
35 pitches on 1.5ha
1250 € to 1550 € per day (2 pers / tent / car)
Camping "family" on the Aubrac Laguiole 20 minutes, 45 minutes from Aurillac, 20mn d'Estaing, Conques, Espalion, the campsite is situated beside a lake with beach supervised in summer, ideal for fishing, hiking, relaxation, relaxation with family…
Located 18.2 km from Raulhac
Favourite
All campsites around Raulhac 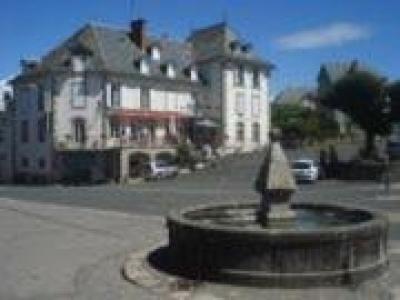 Auberge De Raulhac
8.6
44
Hotel in Raulhac
Room from 53 €
Auberge De Raulhac is located in Raulhac, 39 km from Conques. Guests can enjoy the on-site restaurant. All rooms are fitted with a TV. For your comfort, you will find free toiletries and a hair dryer. Aurillac is 17 km from Auberge De Raulhac,…
Located Raulhac away
Favourite Auberge de la Sapinière
9.5
56
Hotel in Cros-de-Ronesque
Room from 68 €
Located in Cros-de-Ronesque, Auberge de la Sapinière offers a garden, terrace and on-site restaurant. Château de Messilhac is only a 10-minute drive away. All rooms feature a flat-screen TV, a wardrobe, a desk and heating. The en suite bathroom…
Located 4.5 km from Raulhac
Favourite 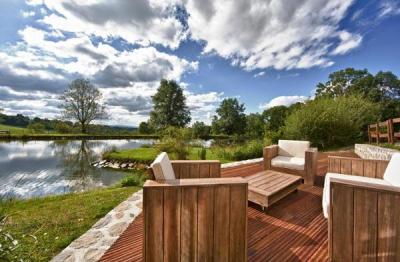 Les Maisons de Montagne - Chez Marie
8.8
33
Hotel in Pailherols
Room from 107 €
Set beside a lake in Pailherols, this unique hotel is set in the Volcans d’Auvergne Regional Park. You have free access to the indoor pool with massage jets, sauna and hammam and homemade breakfast is prepared daily. The rooms at Les Maisons…
Located 6.3 km from Raulhac
Favourite
All hotels around Raulhac