The Moulin de la Galette is located at the corner of rue Lepic and rue Girardon, in the district of Butte Montmartre, in the 18th arrondissement of the capital.

It is the last mill in working order of the thirteen windmills which marked out the hillock. It brings together the Blute-Fin Mill, built in 1622, and the Moulin Radet, dating from 1717. In 1812, the owner of the Blute-Fin Mill purchased the nearby Moulin Radet. For some time, Blute-Fin continues its original business by producing flour sold on Paris, and Radet crushes seeds for perfumery. Then the Radet is moved and integrated with his elder. From 1834, the Moulin de la Galette is the new denomination of the whole, in reference to rye patties then prized.

It is also on this date that a guinguette is open below the mill, which quickly becomes fashionable. Over the decades, industrial mills have stopped the production of traditional mills but the Moulin de la Galette remains in the state. The wings are stopped but he is saved from destruction.

The guinguette has given way to restaurants where celebrities had their habits as Dalida.

Listed in 1954 in the supplementary inventory of historical monuments, the Moulin de la Galette whose wings were renovated in 2001 was immortalized by many artists (Renoir, Toulouse-Lautrec, Van Gogh or Picasso), who appreciated this festive place and colorful, symbol of "Parisian life" and the spirit of Montmartre.

It is also possible to admire the building during a guided tour of this emblematic district. Information on +33 1 49 52 42 63. Campsites in Paris
Quality establishments for a successful holiday. Places not to be missed!
Plan my stay

Campsites in Paris
Quality establishments for a successful holiday. Places not to be missed!
Plan my stay Photography Tour of the Montmartre District
Arts and Crafts in Paris
87 €
Isabelle is a professional photographer and expert on the french capital. Meet her in Montmartre for a photography class in the heart of Paris. This village-like neighbourhood is the perfect place to play with perspective and capture the daily…
Located 410 yd away from the Windmill of La galette
Favourite Dinner and Moulin Rouge Show – With Champagne
9.5
191
Entertainment in Paris
190 €
Book a table for dinner and a show at the one and only moulin rouge to see the latest production from the legendary cabaret hall.  Visit  the Moulin Rouge,  a symbol of Parisian nightlife made famous by artists such as Henri de Toulouse Lautrec,…
Located 540 yd away from the Windmill of La galette
Favourite 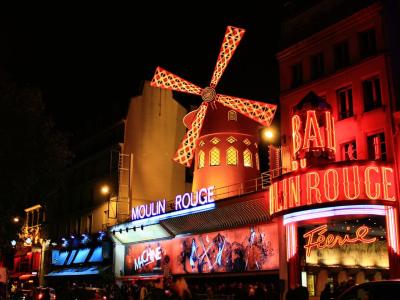 The Moulin Rouge: 11pm Show – With Champagne
9.5
41
Entertainment in Paris
100 €
Spend a incredible evening at the moulin rouge cabaret in paris! Book a ticket for the one-and-only Moulin Rouge,  the world's most famous cabaret venue. Be enchanted by the glamour of this legendary nightspot, the décor, the costumes, and…
Located 540 yd away from the Windmill of La galette
Favourite
All leisure activities around the Windmill of La galette Le Coq Rico
9.0
1284
French cuisine restaurant in Paris
50 € per person
Located 110 yd away from the Windmill of La galette
Favourite Studio Gabrielle
9.8
5
Apartment with 1 bedroom in Paris
85 € to 100 € per double room
For business or vacation in Paris, we propose a comfortable studio for. Rent close to Place de la Nation on a daily, weekly or a long-weekend basis. Completely renovated in 2008, this studio located on the 5th and top floor (same as the owners)…
Located 4 mi away from the Windmill of La galette
Favourite

Les Chambres de Sacaly
9.6
6
House with 2 bedrooms in Saclay
75 € per double room
Véronique and Pierre Brandeis welcome you all year long in their lovely house in the heart Essonne. Friendliness, warmth, authenticity, all combine to make their bed and breakfast a place of relaxation and comfort in pleasant surroundings. Close…
Located 13.2 mi away from the Windmill of La galette
Favourite
All bed & breakfasts around the Windmill of La galette

Paris, Luxembourg Gardens, Apartment 96 m
Apartment for 4 people in Paris
96 m², 2 bedrooms
1200 € to 1440 € per week
You look for accommodation in Paris to visit Paris Area (Versailles, Disney,...) or to accommodate your family or friends for a few days. We offer our apartment located in the 6th, near the Luxembourg Gardens. 1st floor, entrance, large living…
Located 2.8 mi away from the Windmill of La galette
Favourite

Gîte Magnolia
Apartment for 2 people in Corbeil-Essonnes
24 m², 1 bedroom
310 € per week
The Magnolia cottage is ideally located between Versailles (40 km), Disneyland (50 km), Paris and Fontainebleau (34 km). Small charming apartment located in a beautiful family home in the heart of the city, a few minutes from the train station…
Located 20 mi away from the Windmill of La galette
Favourite
All vacation rentals around the Windmill of La galette

Camping de Paris
8.3
22
Campsite in Paris
510 pitches on 7ha
2810 € to 4080 € per day (2 pers / tent / car)
Right in the green center of Bois de Boulogne along the river Seine. The campsite of Paris extends over an area of 7ha. An ideal place to go and visit Paris. 510 pitches are available on this beautiful green area. Come with your tent, caravan…
Located 4.7 mi away from the Windmill of La galette
Favourite Huttopia Versailles
8.6
8
Campsite in Versailles
180 pitches on 4ha
15 € to 25 € per day (2 pers / tent / car)
Versailles camping (Ile-de-France region) enables you and your family to visit the historic town of Versailles, its Château, yet you can also escape to Paris (station rer C Porchefontaine which is accessible from the camping on foot, and be…
Located 10.3 mi away from the Windmill of La galette
Favourite
All campsites around the Windmill of La galette 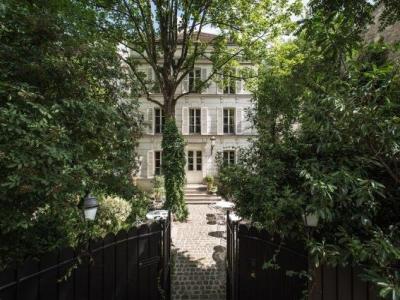 Hôtel Particulier Montmartre
8.2
109
Hotel in Paris
Room from 250 €
Boasting a restaurant, bar, garden and free WiFi, Hôtel Particulier Montmartre is situated in Paris, 1.4 km from Sacré-Coeur and 2.3 km from La Cigale Concert Hall. Featuring room service, this property also provides guests with a terrace. The…
Located 190 yd away from the Windmill of La galette
Favourite
All hotels around the Windmill of La galette