Located in the 8th district of Paris, on the edge of the Champs-Elysées, the Grand Palais still faces the Petit Palais. Listed on the Historical Monuments, it offers on its 77 000 m² of prestigious exhibitions and exhibitions.

The monument was built at the very end of the 19th century for the Universal Exhibition of 1900. It is the work of Henri Delgane, Albert Louvet, Albert-Félix-Théophile Thomas and Charles Girault, architects selected by competition. Today, the Grand Palais consists of a main vessel of a length of nearly 240 meters and surmounted by a huge glass roof. The dome on pendants and the dome are made entirely of iron, glass and steel, for 8500 tons.

It represents the culmination of the eclectic style Beaux Arts very popular at the time, and a beautiful example of the Belle Epoque and its architecture. On its exteriors, one can admire many statues, like the quadrigas in copper or the allegorical works representing the Immortality ahead the Time or the Triumphant Harmony of the Discord. The interior mosaics are not lacking in style, just like those of the outer friezes and their long stripes with very bright colors. The peristyle allows to discover ten mosaic panels representing art at different times, especially to celebrate different civilizations such as the Romans, the Greeks, the Mesopotamians or the Italians of the Renaissance.

Since its opening, the Grand Palais has hosted a large number of exceptional events such as the Lépine contest, the Salon de l'Automobile, the salon des artistes français, the fair Paris or the book fair.

The building also houses the Palais de la Découverte and its many activities in its west wing, while the north wing offers the famous National Galleries wanted by André Malraux and unveiling major temporary exhibitions on such talented artists as Picasso, Monet and Prassinos.. 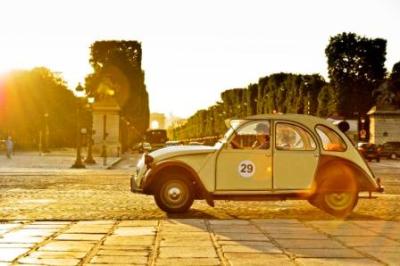 Discover Paris in a Retro 2 CV Car – 3-hour tour
Culture and education in Paris
324 €
The 2 CV was a popular type of car manufactured between 1948 and 1990. This stylish little retro car became a symbol of a whole era and an icon of the French 1960s lifestyle.  Aboard this legendary convertible, you'll drive through the capital…
Located 110 yd away from: Grand Palais
Favourite 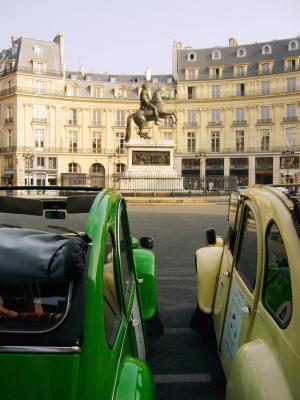 Discover Secret Paris in a Retro 2CV Car
9.3
3
Entertainment in Paris
192 €
Sitting comfortably in a 2CV, a popular car manufactured between 1948 and 1990, you will have the choice between a 90-minute or 3-hour tour, both of which allow you to discover the authentic side of Paris, far from the typical tourist sites. Your…
Located 110 yd away from: Grand Palais
Favourite The French Revolution Walking Tour (in English)
Culture and education in Paris
25 €
Relive the french revolution during this 2-hour tour. Visit the locations where key events that changed the course of French history took place: the storming of the Bastille, the imprisonment of Louis XVI and of Marie-Antoinette at the Conciergerie,…
Located 630 yd away from: Grand Palais
Favourite
All leisure activities around : Grand Palais L'Insider - Taste of Paris
French cuisine restaurant in Paris
WHY GO? LaFourchette offers to experience "Insider" by creating a room cozy restaurant and refined, like sharp addresses selecting "Insider". HOW IT WORKS ? > Take part in the event Taste of Paris > Buy bites prior to Heads > Book your…
Located 110 yd away from: Grand Palais
Favourite Lasserre
9.8
690
French cuisine restaurant in Paris
250 € per person
We offer our private rooms from 10 to 50 people. At dinner between 130 € and 250 € including drinks. Thank you to contact the restaurant by phone.
Located 200 yd away from: Grand Palais
Favourite Studio Gabrielle
9.8
5
Apartment with 1 bedroom in Paris
85 € to 100 € per double room
For business or vacation in Paris, we propose a comfortable studio for. Rent close to Place de la Nation on a daily, weekly or a long-weekend basis. Completely renovated in 2008, this studio located on the 5th and top floor (same as the owners)…
Located 4.4 mi away from: Grand Palais
Favourite

Les Chambres de Sacaly
9.6
6
House with 2 bedrooms in Saclay
75 € per double room
Véronique and Pierre Brandeis welcome you all year long in their lovely house in the heart Essonne. Friendliness, warmth, authenticity, all combine to make their bed and breakfast a place of relaxation and comfort in pleasant surroundings. Close…
Located 11.4 mi away from: Grand Palais
Favourite
All bed & breakfasts around : Grand Palais

Paris, Luxembourg Gardens, Apartment 96 m
Apartment for 4 people in Paris
96 m², 2 bedrooms
1200 € to 1440 € per week
You look for accommodation in Paris to visit Paris Area (Versailles, Disney,...) or to accommodate your family or friends for a few days. We offer our apartment located in the 6th, near the Luxembourg Gardens. 1st floor, entrance, large living…
Located 1.5 mi away from: Grand Palais
Favourite

Gîte Magnolia
Apartment for 2 people in Corbeil-Essonnes
24 m², 1 bedroom
310 € per week
The Magnolia cottage is ideally located between Versailles (40 km), Disneyland (50 km), Paris and Fontainebleau (34 km). Small charming apartment located in a beautiful family home in the heart of the city, a few minutes from the train station…
Located 19.2 mi away from: Grand Palais
Favourite
All vacation rentals around : Grand Palais

Camping de Paris
8.3
22
Campsite in Paris
510 pitches on 7ha
2810 € to 4080 € per day (2 pers / tent / car)
Right in the green center of Bois de Boulogne along the river Seine. The campsite of Paris extends over an area of 7ha. An ideal place to go and visit Paris. 510 pitches are available on this beautiful green area. Come with your tent, caravan…
Located 3.5 mi away from: Grand Palais
Favourite Huttopia Versailles
8.6
8
Campsite in Versailles
180 pitches on 4ha
15 € to 25 € per day (2 pers / tent / car)
Versailles camping (Ile-de-France region) enables you and your family to visit the historic town of Versailles, its Château, yet you can also escape to Paris (station rer C Porchefontaine which is accessible from the camping on foot, and be…
Located 8.5 mi away from: Grand Palais
Favourite
All campsites around : Grand Palais 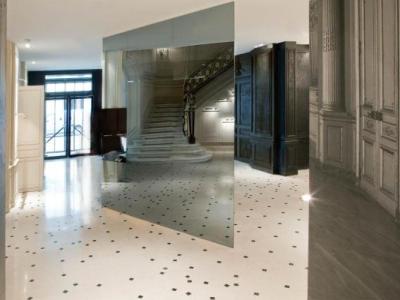 La Maison Champs Elysées
8.3
199
Hotel in Paris
This 19th-century building is located in Paris, between the Avenue des Champs Elysées and the River Seine. The rooms offer a mini Mac computer with free Wi-Fi and a large flat-screen TV. Each air-conditioned and soundproofed room at the La Maison…
Located 290 yd away from: Grand Palais
Favourite 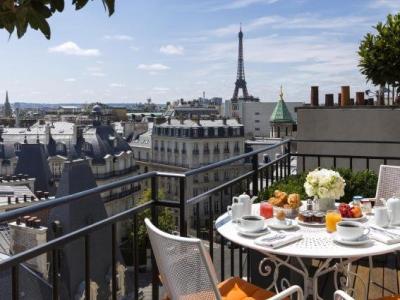 Hôtel San Régis
8.9
285
Hotel in Paris
Housed in a 19th-century private mansion, this boutique hotel is a 3-minute walk from the Champs-Elysées and Grand Palais, as well as 200 metres from the River Seine and the Montaigne Avenue. It offers free WiFi, spacious and individually decorated…
Located 320 yd away from: Grand Palais
Favourite
All hotels around : Grand Palais