The church Saint-Merri is located rue de la Verrerie, at the corner of rue Saint-Martin, in the 4th arrondissement of the capital.

It owes its name to Mederic, a hermit who came from the abbey of Autun who had settled in the seventh century in a hut near an oratory erected on the site of the current building.

In the 9th century, his body was exhumed and became Saint Merri, his relics were deposited in a chapel.

A first church succeeded him in the eleventh century, rebuilt from 1515 to 1612 before being remodeled in the eighteenth.

Transformed saltpeter factory during the Revolution, the church Saint-Merri is returned to the cult in 1803 and classified as early as 1862.

Flamboyant Gothic style, the building long served by canons of the cathedral is nicknamed "Our Lady the little".

At the level of the outside, one notices the rich carved decorations of the facade.

On the west facade, an amazing cloakroom composed of many small sculptures is also visible, dating from the sixteenth century. It is also necessary to stop at the level of the sculpture adorning the keystone of the portal. Restored in the nineteenth century, it represents the devil in the form of a horned mid-man and mid-woman with bat wings, evoking the "occultist" literature of the time.

Inside, you can admire 16th century stained glass windows at the first spans of the nave, evoking in particular the lives of Saint-François d'Assise and Saint-Madeleine.

However, it is for its many paintings that the church is appreciated by lovers of sacred art. A Pietà by Nicolas Legendre (seventeenth century), several works by Van Loo (eighteenth), frescoes by Théodore Chassériau (nineteenth) are exhibited, among other things, on the walls of chapels or aisles.

A superb richly carved wooden pulpit from 1753, an old baptismal font decorated with the arms of Louis XII and Anne of Brittany are also housed in the church, which is finally famous for holding the oldest bell of Paris. It is 1331 and is located in a campanile overlooking the left portal.

Located near the Pompidou Center, the Saint-Merri church regularly hosts concerts, theatrical performances and exhibitions of contemporary art. It is the seat of a parish known for its special attention to the poor, migrants and minorities. 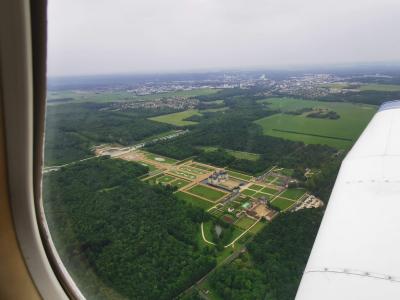 Flight around Paris in a tourist plane
Entertainment in Paris
125 € to 249 €
Up, up and AWAY! This is your chance to experience the fun of flying privately. Yes, that's right. No delays, no screaming of children, or huge airports. This is the real deal. Your very own private pilot, who just wants to share the magic of…
Located 310 yd away from the Church Saint-Merri
Favourite 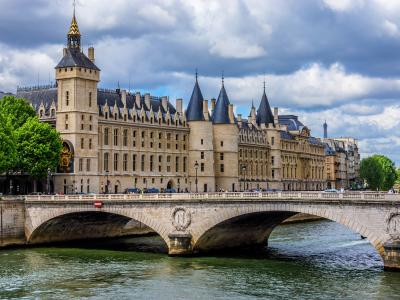 E-ticket for the Conciergerie – Priority access
8.0
1
Culture and education in Paris
9 €
Discover the famous conciergerie, a former palace and prison set at the very heart of paris. Located on the banks of the seine on the ile de la cité, this historic monument allows visitors to relive the history of the french revolution. Built…
Located 570 yd away from the Church Saint-Merri
Favourite
All leisure activities around the Church Saint-Merri Patita Negra
9.0
217
Spanish restaurant in Paris
20 € per person
Located 110 yd away from the Church Saint-Merri
Favourite Studio Gabrielle
9.8
5
Apartment with 1 bedroom in Paris
85 € to 100 € per double room
For business or vacation in Paris, we propose a comfortable studio for. Rent close to Place de la Nation on a daily, weekly or a long-weekend basis. Completely renovated in 2008, this studio located on the 5th and top floor (same as the owners)…
Located 2.6 mi away from the Church Saint-Merri
Favourite

Les Chambres de Sacaly
9.6
6
House with 2 bedrooms in Saclay
75 € per double room
Véronique and Pierre Brandeis welcome you all year long in their lovely house in the heart Essonne. Friendliness, warmth, authenticity, all combine to make their bed and breakfast a place of relaxation and comfort in pleasant surroundings. Close…
Located 12.1 mi away from the Church Saint-Merri
Favourite
All bed & breakfasts around the Church Saint-Merri

Paris, Luxembourg Gardens, Apartment 96 m
Apartment for 4 people in Paris
96 m², 2 bedrooms
1200 € to 1440 € per week
You look for accommodation in Paris to visit Paris Area (Versailles, Disney,...) or to accommodate your family or friends for a few days. We offer our apartment located in the 6th, near the Luxembourg Gardens. 1st floor, entrance, large living…
Located 1.2 mi away from the Church Saint-Merri
Favourite

Gîte Magnolia
Apartment for 2 people in Corbeil-Essonnes
24 m², 1 bedroom
310 € per week
The Magnolia cottage is ideally located between Versailles (40 km), Disneyland (50 km), Paris and Fontainebleau (34 km). Small charming apartment located in a beautiful family home in the heart of the city, a few minutes from the train station…
Located 18.1 mi away from the Church Saint-Merri
Favourite
All vacation rentals around the Church Saint-Merri

Camping de Paris
8.3
22
Campsite in Paris
510 pitches on 7ha
2810 € to 4080 € per day (2 pers / tent / car)
Right in the green center of Bois de Boulogne along the river Seine. The campsite of Paris extends over an area of 7ha. An ideal place to go and visit Paris. 510 pitches are available on this beautiful green area. Come with your tent, caravan…
Located 5.3 mi away from the Church Saint-Merri
Favourite Huttopia Versailles
8.6
8
Campsite in Versailles
180 pitches on 4ha
15 € to 25 € per day (2 pers / tent / car)
Versailles camping (Ile-de-France region) enables you and your family to visit the historic town of Versailles, its Château, yet you can also escape to Paris (station rer C Porchefontaine which is accessible from the camping on foot, and be…
Located 9.7 mi away from the Church Saint-Merri
Favourite
All campsites around the Church Saint-Merri 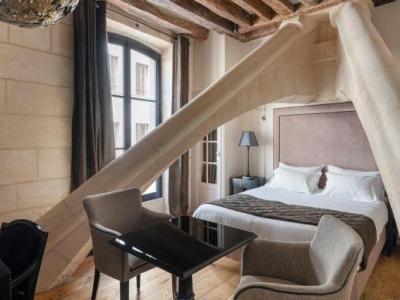 Hôtel Le Presbytère
9.2
325
Hotel in Paris
Room from 232 €
Hôtel Le Presbytère is set in a former presbytery. It is located in the centre of Paris, a mere 300 metres from the famous Pompidou Centre and 350 metres from Les Halles shopping centre. Notre-Dame de Paris is 800 metres away. Set over 5 floors,…
Located 110 yd away from the Church Saint-Merri
Favourite 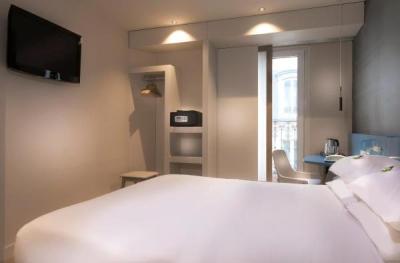 Hotel Andréa
7.8
368
Hotel in Paris
Room from 120 €
Hotel Andréa is set in the 4th arr. in Paris, 300 metres from Pompidou Centre and a 2-minute walk from Hôtel de Ville Metro Station. Free WiFi access is available throughout the property. The rooms are air conditioned and feature a flat-screen…
Located 110 yd away from the Church Saint-Merri
Favourite 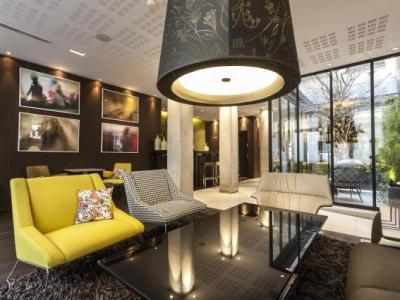 Hôtel Duo
8.6
494
Hotel in Paris
Room from 125 €
Set in the lively Marais district in central Paris, this design hotel features a sauna and fitness room. It offers air-conditioned guest rooms with free Wi-Fi access and a minibar. Satellite TV and a telephone are standard in each contemporary…
Located 200 yd away from the Church Saint-Merri
Favourite
All hotels around the Church Saint-Merri