Montoir-de-Bretagne is a town in Loire-Atlantique in Pays de la Loire, east of Saint-Nazaire which it borders.

Its vast territory of 36 square kilometers bordering the right bank of the Loire estuary and includes the north part of the marshes of Brière, large wetland rich biodiversity.

Already busy BC, the remains of a farmhouse dating from the Iron Age have been unearthed, the village form the Middle Ages and became the seat of a lordship.

Until the nineteenth century, the activity is both rural and maritime. inside, the farmers cultivate the reclaimed land and livestock sheep produce lambs deemed (pre-salt) and on the front of the Loire, a river port grows and the number of inhabitants are hired as sailors on merchant ships based In Nantes.

In the twentieth century, the town experienced a transformation with the extension of the airport of Saint-Nazaire and the 1970s, commercial port terminals of Nantes-Saint-Nazaire on the bank of the estuary at Montoir level, facilities are designed to accommodate LNG. Moreover, a unit of Airbus moved about the town.

However, with more than 7200 inhabitants, Montoir-de-Bretagne has preserved a part of its heritage, environment rich north (included in the Regional Natural Park) and offers a leisure offer "nature" and cultural interest.

A discovery of the built and cultural heritage of the town can begin with his church rebuilt in the nineteenth century. The previous, from the Middle Ages, had been struck down in 1698. A tower was then rebuilt with stone from the castle Lorieux (town Crossac). This tower is still visible.

See also, the former lord of the Ormois who reported to the Vicomte de Donges. Some walls of the existing building still date from the fourteenth and fifteenth centuries, and the framework of the seventeenth, very well made, has been preserved. In the early twentieth century, the building was converted into a farm.

To better understand the history of the town, it will then go to the museum of "Wooden Marine Brivet of" run by an association: the Brivet is a tributary of the Loire, which runs through the marshes of Brière and flows into the River on the border of Saint-Nazaire and Montoir-de-Bretagne. Through documents and models, is told the story of sailors Briere, cabotage, but also the rise of the triangular trade (with Africa and the Caribbean), and the first steps of shipbuilding and its growth has led to Saint-Nazaire paramount in this regard. Open daily from late June to early September and the rest of the year by appointment. Free admission. Information at +33 2 40 45 58 22.

Between history and enjoy the ride in a central landscaped site, a step in the medieval garden of the Caves, the hamlet of Trégonneau, created in 2014, on the occasion of 500 years of the death of Anne of Brittany, if reveals instructive. The present educational website so crops from the Middle Ages known for their culinary and therapeutic virtues. Combining aesthetics and history, the garden is open from mid-May to late September. Tours can be guided by passionate volunteers and scientists. Talks are also scheduled. Information at +33 2 40 45 58 22.

For athletes, at the Bonne Fontaine complex, a permanent orienteering course is available and tennis courts are accessible to visitors. Information at +33 2 40 45 53 90.

Lovers of hiking or cycling are especially welcome. Since Montoir-de-Bretagne, they can join a network of 170 km of cycle paths including the entire metropolitan area of ​​Saint-Nazaire, the Loire to the Brière marshes. Same for pedestrians and joggers. Maps and information +33 2 40 22 40 65.

Hiking centered on the rich local biodiversity are also offered by the Regional Natural Park of Brière, who also program activities, workshops and exhibitions. Information at +33 2 40 91 68 68.

In a different genre, discover the mysteries of the commercial port, terminals, shipyards, some sites like Airbus can be via guided tours dedicated to "industrial tourism". Program information +33 2 40 22 40 65.

Finally, the airport of Saint-Nazaire-Montoir whose activity is centered on commercial traffic and technical flights for the Airbus account also houses a flying club that offers particular air baptisms and courses piloting. Contact the +33 2 51 10 82 53.

In April, "folk" festival with shows and entertainment (concerts, meetings, conferences) organized on Montoir-de-Bretagne and neighboring towns to Trignac Besné and Saint-Nazaire.

Every Wednesday, at last, the market reveals an opportunity to enjoy the terroir of the region (products of land and sea).

All leisure activities around Montoir-de-Bretagne

All outings around Montoir-de-Bretagne Ristorante Del Arte - Trignac
8.2
168
Italian restaurant in Trignac
31 € per person
COME AWAY - The Del'Arte restaurant Trignac, drawing from its origins, welcomes you with ambience to the Italian and resolutely traditional recipes. Its frame pushes the usability! VIVA ITALIA - Whether you choose fresh pasta, pizza or even…
Located 5.6 km from Montoir-de-Bretagne
Favourite Brevocean rooms in the calm and ocean
10
4
House with 2 bedrooms in Saint-Brevin-les-Pins
90 € to 100 € per double room
Brevocean is a charming typical Brévinoise house completely renovated in 2017. It is located 700 m from the Beach of the Ocean and 10 minutes walk from the shops of the tourist center. Located in its green setting, the house is quiet and the…
Located 11.2 km from Montoir-de-Bretagne
Favourite Le pré a coquette
9.5
28
House with 2 bedrooms in Saint-André-des-Eaux
65 € per double room
Cozy Bed & Breakfast located in the heart of the national park of the great Briere, close to the bay and the Gulf of the Baule, cited the medieval Guerande salt marshes, independent entrance, bathroom and toilet, tv veranda with garden furniture,…
Located 13.3 km from Montoir-de-Bretagne
Favourite 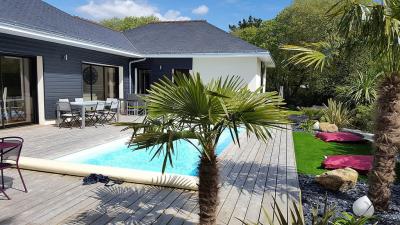 The escoublac villa
10
2
House with 3 bedrooms in La Baule-Escoublac
79 € to 149 € per double room
It is in a beautiful modern villa of full foot architect you stay. Villa Escoublac transport you to a peaceful setting with heated swimming pool (May to September) and its garden fully landscaped. Located 200 m from the town of Pornichet and…
Located 16.5 km from Montoir-de-Bretagne
Favourite
All bed & breakfasts around Montoir-de-Bretagne 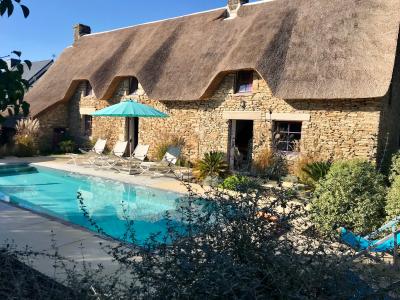 KerSalines
10
2
House for 10 people in Guérande
240 m², 5 bedrooms
3500 € per week
At the heart of the Natural Regional Park of Brière, but only 15 minutes from the beautiful beaches of the wild coasts of the peninsula of Guerande (Pornichet, La Baule, Le Pouliguen, Batz sur Mer, Le Croisic, Piriac, Quimiac, Mesquer, Penestin,…
Located 17.8 km from Montoir-de-Bretagne
Favourite 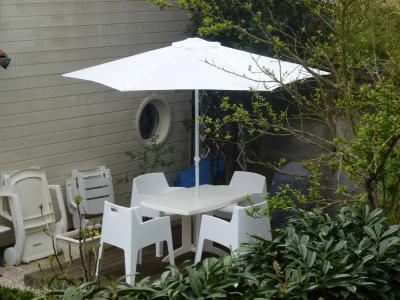 House in the heart of La Baule 3/4 people
10
5
House for 4 people in La Baule-Escoublac
50 m², 2 bedrooms
350 € to 750 € per week
Small house near the beach and the market, in a residential area in the heart of the station but quiet. House ideally located to enjoy - On foot, the beach everyday market (seafood and other local products), the casino area with its luxury boutiques…
Located 19.4 km from Montoir-de-Bretagne
Favourite 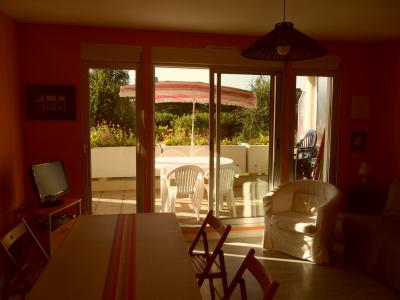 Les Hauts de la Baule
Apartment for 5 people in Guérande
45 m², 1 bedroom
455 € to 770 € per week
Individual rents at the week T2 of 45 m² for 5 people in quiet and secure residence with swimming pool in wooded park. Residence located 10 minutes walk from Benoit Beach, near the equestrian centre, the thalasso, the casino, the Atlantia Cultural…
Located 20 km from Montoir-de-Bretagne
Favourite
All vacation rentals around Montoir-de-Bretagne 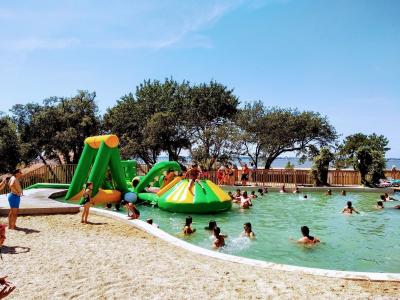 Camping Courance - Camp Quality
SPECIAL OFFER
Campsite in Saint-Brevin-les-Pins
200 pitches on 4.6ha
1980 € to 3470 € per day (2 pers / tent / car)
The camping La Courance is 800 m from the center of Saint Brevin Les Pins and direct access to the sea. Swimming allowed 500 m. This campsite, open all year, can accommodate you with your tent, caravan or camper. Different rental are available:…
Located 7.1 km from Montoir-de-Bretagne
Favourite 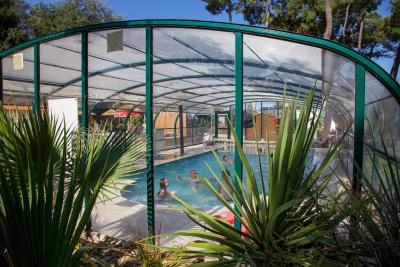 Camping de Mindin - Camping Quality
SPECIAL OFFER
9.3
24
Campsite in Saint-Brevin-les-Pins
73 pitches on 1.3ha
1890 € to 3320 € per day (2 pers / tent / car)
Camping Mindin *** can welcome you all year in locations and rental. We offer canvas bungalows and mobile homes for up to 10 people. Some rentals even offer a sea view. This small family campsite with 74 pitches is located in direct access to…
Located 7.1 km from Montoir-de-Bretagne
Favourite 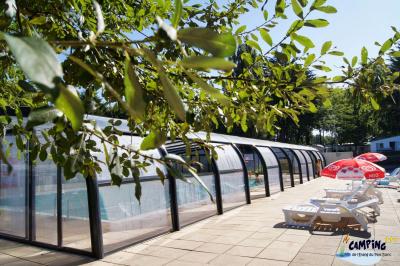 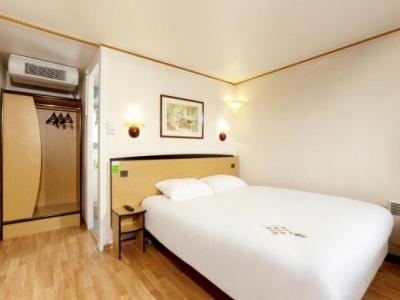 Campanile Saint-Nazaire ~ Trignac
7.0
614
Hotel in Trignac
Room from 45 €
With the beaches nearby, this modern hotel is an ideal base from which to discover the region, situated on the outskirts but the town centre is easily accessible. Each air-conditioned room is equipped with free Wi-Fi access, a flat-screen TV…
Located 5.4 km from Montoir-de-Bretagne
Favourite 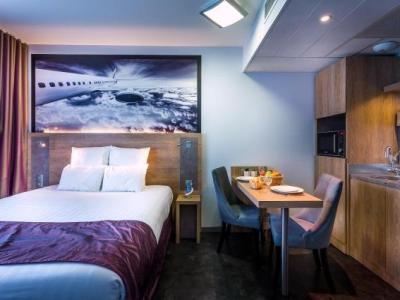 Kyriad Prestige Saint Nazaire
8.1
639
Hotel in Trignac
Room from 62 €
A 15-minute walk from Saint Nazaire SNCF Train Station, this property offers an outdoor, heated swimming pool and free parking. For an extra cost guests can work out in the fitness room. A dining area and a balcony are featured in each air-conditioned…
Located 5.5 km from Montoir-de-Bretagne
Favourite
All hotels around Montoir-de-Bretagne