Town of Hauts-de-Seine, in the Île-de-France, Malakoff takes place south of Paris, bordering the XIV arrondissement. Near Châtillon Montrouge, or Vanves and Clamart, this city of more than 30 000 inhabitants is a member since 1 January 2016 the metropolis of Greater Paris.

Crossed by the Green Belt south of Paris which includes part of the journey via Turonensis, old pilgrimage route to St Jacques de Compostela, the great city of Malakoff takes its current name from a decision of 1868, date the creation of the town following his separation from Vanves. This title would come a defensive tower located near Sevastopol which has taken victory in the Crimean War by the French.

Now highly urbanized and well developed economically, Malakoff is characterized by a very good public transport links and a dynamism more significant. The many cultural and sporting events held there, as it has important architectural heritage, make this town francilienne a popular spot for tourists. Its proximity to Paris can also easily explore the charms of the capital.

Although recent, the city however Malakoff present its visitors an architectural heritage which is not without interest, dating mainly from the nineteenth and twentieth centuries.

It has no fewer than three buildings listed as Historic Monuments in the town of Hauts-de-Seine. It is possible to admire an old mansion from the early nineteenth century, which now houses an arts center, the former top electricity school, built in the 1920s, and an old distillery factory-set bottle of the early twentieth century.

The Church of Our Lady of the Miraculous Medal, was built in Malakoff in the 1860s neo-Romanesque style, it has in its interior objects protected under the Historic Monuments: The Table Leaking Egypt, as well as organ and instrumental part.

Walking through the streets of Malakoff, visitors greatly appreciate other sites or monuments listed in the Additional Inventory of Historical Monuments, as a bandstand, the Léon Salagnac Park and its outdoor theater, or a former well nineteenth century.

Oldest vestige of the city, a Neolithic polisher in front of the former boarding school Notre Dame.

One can admire the last gas lamp of the entire Île-de-France, a relic of a bygone era.

The chapel-cave Jean-Michel Chesné and naive art environment, although threatened by the local development plan, still attracts many curious visitors. City Malakoff offers two markets, one on the place of November 11 on Wednesday, Friday and Sunday morning, and the second on the boulevard Stalingrad, Thursday and Saturday morning.

Many garage sales are held every year in May and October.

Around 8 March, Malakoff offers a week devoted to women's rights with conferences and other events of interest.

Every two years in April, open houses are held in the municipal greenhouses.

The celebration of the city and associations and their many activities, takes place in the month of June.

Around September 21, Malakoff Cultivate Peace is an event especially with exhibitions, commemorations bombings of Hiroshima and Nagasaki, or of the discussions around the theme of peace.

A Christmas solidarity is proposed in December.

All leisure activities around Malakoff

All outings around Malakoff Studio Gabrielle
9.8
5
Apartment with 1 bedroom in Paris
85 € to 100 € per double room
For business or vacation in Paris, we propose a comfortable studio for. Rent close to Place de la Nation on a daily, weekly or a long-weekend basis. Completely renovated in 2008, this studio located on the 5th and top floor (same as the owners)…
Located 5.5 mi from Malakoff
Favourite

Les Chambres de Sacaly
9.6
6
House with 2 bedrooms in Saclay
75 € per double room
Véronique and Pierre Brandeis welcome you all year long in their lovely house in the heart Essonne. Friendliness, warmth, authenticity, all combine to make their bed and breakfast a place of relaxation and comfort in pleasant surroundings. Close…
Located 8.3 mi from Malakoff
Favourite

Paris, Luxembourg Gardens, Apartment 96 m
Apartment for 4 people in Paris
96 m², 2 bedrooms
1200 € to 1440 € per week
You look for accommodation in Paris to visit Paris Area (Versailles, Disney,...) or to accommodate your family or friends for a few days. We offer our apartment located in the 6th, near the Luxembourg Gardens. 1st floor, entrance, large living…
Located 2.5 mi from Malakoff
Favourite

Gîte Magnolia
Apartment for 2 people in Corbeil-Essonnes
24 m², 1 bedroom
310 € per week
The Magnolia cottage is ideally located between Versailles (40 km), Disneyland (50 km), Paris and Fontainebleau (34 km). Small charming apartment located in a beautiful family home in the heart of the city, a few minutes from the train station…
Located 16.5 mi from Malakoff
Favourite
All vacation rentals around Malakoff

Camping de Paris
8.3
22
Campsite in Paris
510 pitches on 7ha
2810 € to 4080 € per day (2 pers / tent / car)
Right in the green center of Bois de Boulogne along the river Seine. The campsite of Paris extends over an area of 7ha. An ideal place to go and visit Paris. 510 pitches are available on this beautiful green area. Come with your tent, caravan…
Located 4.6 mi from Malakoff
Favourite Huttopia Versailles
8.6
8
Campsite in Versailles
180 pitches on 4ha
15 € to 25 € per day (2 pers / tent / car)
Versailles camping (Ile-de-France region) enables you and your family to visit the historic town of Versailles, its Château, yet you can also escape to Paris (station rer C Porchefontaine which is accessible from the camping on foot, and be…
Located 6.4 mi from Malakoff
Favourite
All campsites around Malakoff 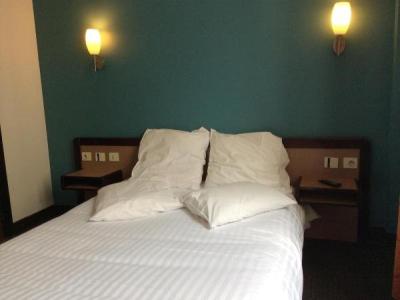