The village is located at 1430 m altitude in the upper valley of the Ariege, just before the Andorran border.

It is a typical village in stone, with its hiking trails, fountains ...

According to the chronicle of Vich, Hospitalet owe its foundation to the knight Bertrand Enveight nephew of Susan Enveight, dowager-Jordan, where the boundaries came up Saillens (common Mérens-les-Vals) . Surprised by the year 1003 with his horse through a snowstorm on the western side of the neck Puymorens Enveight the knight made a vow, if he had saved his life to build a hospital or a shelter house with oratory dedicated to Saint Suzanne, patron of his aunt. At the same time, he opened his sword the belly of his horse, tore out the guts and put in their place. By this ingenious method, he warmed himself, could wait until the weather and find his way. He kept his promise and we still see today the chapel he had built near the bridge called Sainte Suzanne. This became the patron saint of Hospitalet. His feast day is August 11. The sanctuary of St. Suzanne was held by monks of the Hospitaller Order of Saint John of Jerusalem. At that time, the population consisted of Hospitalet July-August religious service attached to the hospital, assisted by a few volunteer workers (Donats) who helped care for travelers and pilgrims, to herding and cultivate the land. All lived very soberly.

In 1791, when the formation of the territory of Commons, the Refuge was a hamlet Mérens-les-Vals. Its first mayor was Peter Astri. Until the mid 17th century, the Refuge was designated as the Hospital de Sainte Suzanne, in memory of its founding. After the plague of 1631 and the records of Vital Mérens-les-Vals, it appears that the village has a church, under the patronage of St. Susanna, and a cemetery separate from Merens. The church bell, dating from the 17th century, was recast in 1843. His weight is 164 kg and note E-flat.

Village near the border, L'Hospitalet knew the invasion of Spain in April 1793 (where they were repulsed by the National Guard and troops of General Marbot) in 1811 and 1812 where they "went down" in the region Ax and even to the gates of Tarascon.

The iron mines Puymorens used to forge the Ariège valley make it, too, a necessary and a relay in line with its vocation. In 1865, the RN 20 to Mérens stopped. Not until the late 19th century stagecoaches crossed the neck of Puymorens.

Its border location and topography make Hospitalet a crossroads: a Post Office was opened on 1 October 1898. The arrival of the railway with its extension to Ripoll allows the opening of the tunnel construction of the railway, October 20, 1908, in the presence of Delcasse, former minister. A hydroelectric plant is installed and a customs post.

The village is at the heart of the mountain, discovering Wilderness Sisca / Pédourès, Bésines ... Many lakes and ponds suitable for fishing, overnight possible mountain refuge (Bésines, Rulhe, Juclar).

In winter, ski touring reigns as the snowshoe. Wildlife is everywhere, the chamois, mouflon of Corsica in the valleys of Worn ... Leisure activities in the Ariège
Compare reviews, photos and rates with an interactive map. Promotions and weekend offers.
See selection

Leisure activities in the Ariège
Compare reviews, photos and rates with an interactive map. Promotions and weekend offers.
See selection

Many nature activities throughout the summer in partnership with the Association local nature.

Many mountain trips open to all with mountain observatory Orlu.

27 km: the career of talc Luzenac.

At 32 km: the eagles Lordat Castle and visiting the castle, Romanesque churches Axat ...

Discovery of the Aude and Pyrenees-Orientales nearby.

All leisure activities around L'Hospitalet-près-l'Andorre Le Chalet
8.9
73
French cuisine restaurant in Ax-les-Thermes
31 € per person
The chalet is primarily a warm and friendly atmosphere serving a unique setting. In the heart of the Pyrenees and close to the spa resort of Ax-les-Thermes, discover the card that offers Frédéric Debeves. Here only have room on your plate…
Located 9.5 mi from L'Hospitalet-près-l'Andorre
Favourite Le Comptoir JOA - Ax-les-Thermes
9.3
30
French cuisine restaurant in Ax-les-Thermes
25 € per person
GENEROUS - If you're one of those who love well plates loaded, then this restaurant will be clear for you, you will find very generous portions that will overcome all stomachs. RECEPTION - The warm and friendly welcome that you reserve this…
Located 9.5 mi from L'Hospitalet-près-l'Andorre
Favourite La Chaumière
9.3
191
French cuisine restaurant in Font-Romeu-Odeillo-Via
33 € per person
Nestled in the beautiful ski resort of Font Romeu, La Chaumiere is located in the warm atmosphere of a rustic cabin. At the table, you have the pleasure to enjoy a Catalan-inspired traditional cuisine. The dishes are prepared with local products…
Located 13.7 mi from L'Hospitalet-près-l'Andorre
Favourite
All restaurants around L'Hospitalet-près-l'Andorre 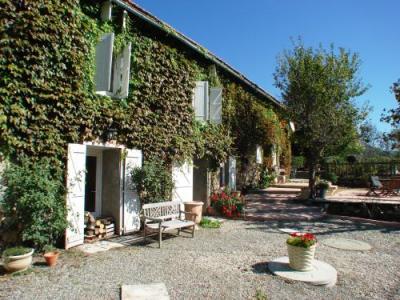 La bruyere chez martine
9.7
39
House with 3 bedrooms in Appy
62 € to 65 € per double room
Chez Martine, you will discover the warmth, friendliness, good living in a house of character situated in a small mountain village. Another way to discover France the 'Bed & Breakfast' in French. Discover the Ariege in all its facets, Curiosities,…
Located 14.4 mi from L'Hospitalet-près-l'Andorre
Favourite 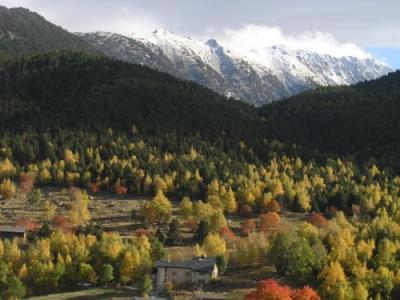 Le cochon du madres
9.2
7
Farm with 6 bedrooms in Escouloubre
66 € per double room
Mr. and Mrs. cucuillere you home at the inn 'madres of the pig', located in the Aude at 1000 meters altitude. Vainde producer of beef and pork, with artisanal production of cold cuts, pâté and cooked dish (casserole, cassoulet, confit beef...).…
Located 19.6 mi from L'Hospitalet-près-l'Andorre
Favourite
All bed & breakfasts around L'Hospitalet-près-l'Andorre 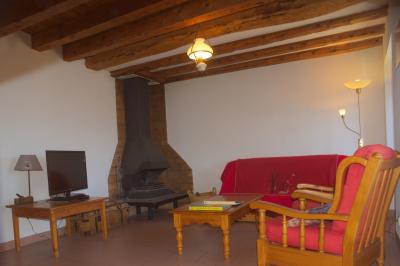 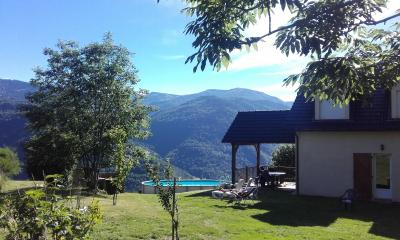 Les rives de l'Ariège
SPECIAL OFFER
9.0
4
Apartment for 9 people in Luzenac
90 m², 3 bedrooms
400 € to 510 € per week
Apartment in ground floor villa on a plot bordering the Ariège on 4000 square meters, with a large summer kitchen with barbecue. With three bedrooms a living room a large kitchen a pantry 2 bathrooms and 2 toilets for 6 people possibility up…
Located 12.1 mi from L'Hospitalet-près-l'Andorre
Favourite
All vacation rentals around L'Hospitalet-près-l'Andorre

The Marmot
10
1
Campsite in Savignac-les-Ormeaux
185 pitches on 2.7ha
1050 € to 1350 € per day (2 pers / tent / car)
The camping la marmotte has 185 pitches with a minimum surface area of ​​80 m². Several types of accommodation are possible: tent, camper, caravan, mobile home, motorhome or apartment. Besides the pleasant surroundings offered by the place,…
Located 9.9 mi from L'Hospitalet-près-l'Andorre
Favourite Chalets 6p at the camping Huttopia Font-Romeu
9.6
3
Campsite in Font-Romeu-Odeillo-Via
179 pitches on 7ha
2180 € to 3050 € per day (2 pers / tent / car)
In winter : Located in the south of France (Catalan Pyrénées), the 6-person wooden chalets at Huttopia Font-Romeu offers exceptional views to the mountains. Situated in a forest, at the entrance to the village of Font-Romeu, spend your days…
Located 13.9 mi from L'Hospitalet-près-l'Andorre
Favourite 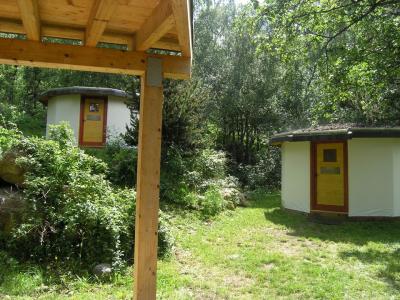 Les Terrasses, Orri de Planès campground
8.0
1
Campsite in Planès
8 pitches on -1ha
Four eco-yurts and four campsites in an exceptional setting Our eco-yurts are unique structures designed by us and custom built by local artisans. Constructed of wood and cloth, they have green roofs and parquet floors. We like to think of them…
Located 18.6 mi from L'Hospitalet-près-l'Andorre
Favourite
All campsites around L'Hospitalet-près-l'Andorre 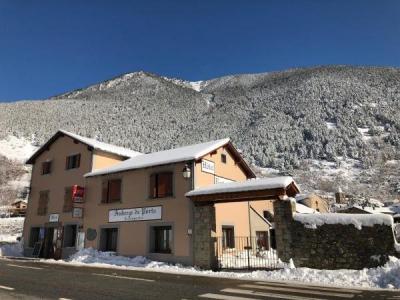 Le Campcardos
8.2
82
Hotel in Porta
Room from 47 €
Le Campcardos features free WiFi and views of mountain in Porta. The accommodation offers a ski pass sales point, as well as a restaurant and a bar. Free private parking is available and the hotel also provides ski equipment hire for guests…
Located 4.4 mi from L'Hospitalet-près-l'Andorre
Favourite 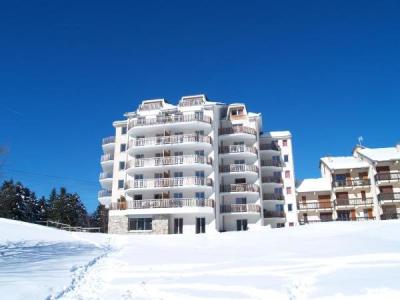 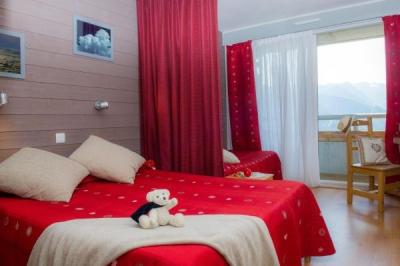 Village Vacances Le Tarbesou
7.8
52
Hotel in Ax-les-Thermes
Room from 89 €
Le Tarbesou is a holiday park overlooking the Pyrenees and situated in Ax 3 Domaines ski resort, 400 metres from the slopes. It features a bar, a restaurant and free Wi-Fi access. The soundproofed rooms all have a view on the slopes and a private…
Located 8.1 mi from L'Hospitalet-près-l'Andorre
Favourite
All hotels around L'Hospitalet-près-l'Andorre