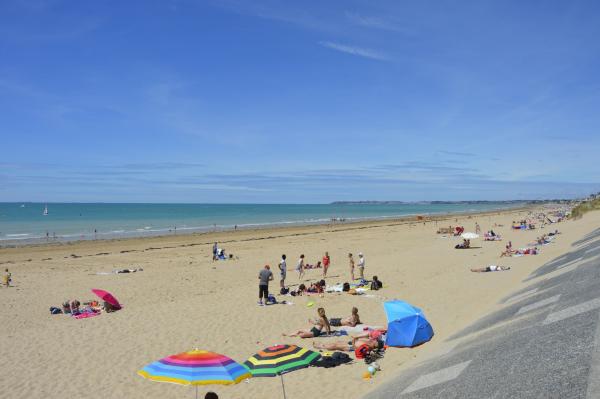 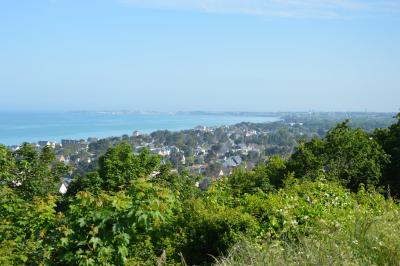 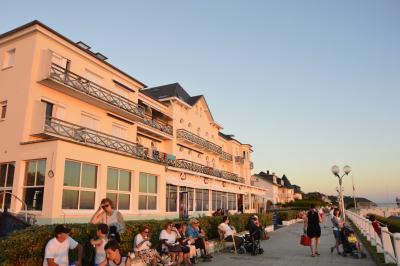 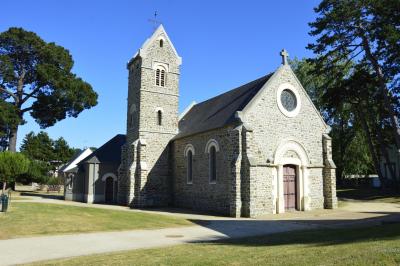 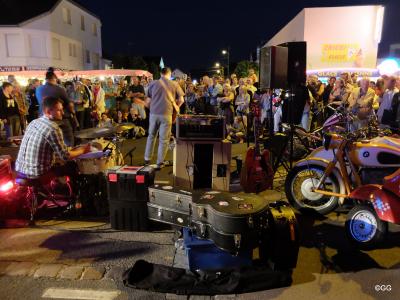 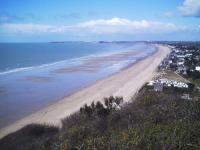 Campsites in the Manche
Ideas and special offers to make the most of your stay. An easy way to find that gem you're looking for!
Book now

Jullouville is the resort of Mont-Saint-Michel bay located on the west coast of the English Channel in Normandy. The city offers a unique view of Cancale in Granville while passing by the tip of Grouin and the archipelago of Chausey.

In summer Jullouville is THE must-resort with its many shops, restaurants, bars, entertainment, funfair, markets and sports tournaments.

The hinterland, quiet and green, offers fans of walks, bicycle or equestrian many hiking trails through Normandy.

Campsites in the Manche
Ideas and special offers to make the most of your stay. An easy way to find that gem you're looking for!
Book now

The former Hotel Casino: Heart of the station, built between 1881 and 1883, the three main avenues converge on him. The Casino offers first guests of Jullouville cultural, theatrical and musical, with gaming circle. He was home at the time 3 bathrooms painting exhibitions. One of the first lounges nicknamed "The Turtle" took place there in 1884. It currently houses a residential accommodation, and a restaurant on the ground floor.

The Château de la Mare: Built in 1907 by Messrs Jorre and Juy, great hunting and fishing enthusiasts, it was bought in 1930 by the city of Saint Ouen which adds a new brick building and established a colony holidays. He became in 1944 the headquarters of the allied forces led by General Eisenhower stayed there for two months. Local surrounding it are currently an authorized visitor center by the National Education and lodgings.

The old station: Between 1908 and 1935, Jullouville was served by the Granville-Avranches online. The line followed the coastal road to Edenville and crossed the massif of Pignon Névourie up the valley of the painters from the north. The average speed was 20 km / h, with peaks of 45 km / h. In 1935, buses replaced the train. The old station is now home to the Tourist Office.

The steeple of the church of Bouillon and his apple tree: The walls of the church tower springs curiously, outside, the large branch of an apple tree, the most famous of the region. It is said that a seed, a seed, mixed mortar of the wall, kept a parcel of life, and woke up, taking advantage of favorable circumstances, such a hint of moisture. Its age is probably over 150 years and every spring it bears flowers and apples fall "safe" (sour).

Menhir Vaumoisson: Popularly called the stone the devil. It is said that Satan, in charge of the block that he went out to Chausey, wore for construction of the Pont au Bault. He climbed the pinion when he saw a priest with his stole. At the sight of this opponent, he sank his burden. Its 5 claws remained footprints in granite and place of the meeting rose a cross (since transferred to the cemetery of Bouillon), picture of faith in front of the work of the devil. This megalithic stone would actually be a place of sacrifice and symbol of druidic worship of the ancient peoples of the region.

Fisheries Jullouville: On the coast, the tide suggests a construction edging stones fisheries. They are established since the fifteenth century. The first were built of wood. This V-shaped, made of piles of stones, used to catch fish and some crustaceans such as cuttlefish, spider crabs, shrimp, sardines, mackerel, plaice, sole... The few private fisheries yet in working order are currently intended for limited use, this being due to the scarcity of cash and maintenance difficulties.

Sport: Beach Jullouville and its lake offer a huge playground for lovers of sailing and navigation. This is the spot to discover for kite surfing lovers.

Horse Racing: The 8 May each year, Jullouville Beach transforms the time of low tide and became the marine racecourse of the hold. Seven races it compete with the sea in the background. This tradition, perpetuated by society horseracing Jullouville, date of 1886. The spectacle of this ephemeral arena is entirely dependent on the tide and the date of the event corresponds with a trip by a factor greater than 95 with a tide low around 16:30. A real village taking shape and which has more than 1500 spectators and more than 100 horses and jockeys.

Entertainment: Every Friday in July and August, the town center becomes pedestrian Jullouville time a party where are offered 6 free outdoor concerts and where there are many unpackers... This is the place Involved residents and visitors to the area! 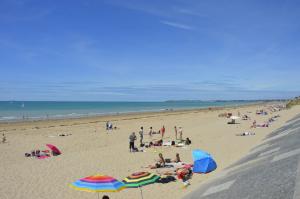 The most beautiful beach of South Channel
See photo 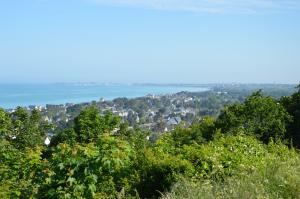 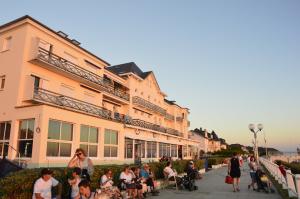 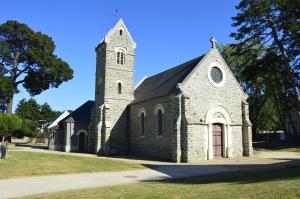 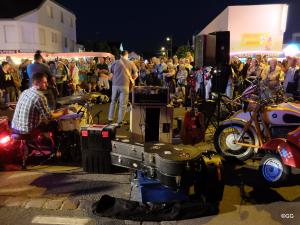 All leisure activities around Jullouville 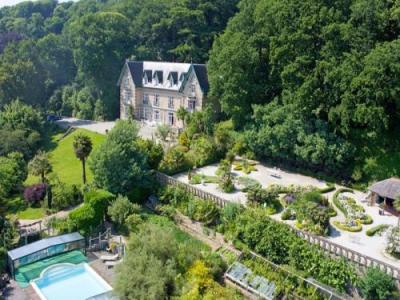 Château les Hauts - vue onto Mont St. Michel
9.2
17
Castle with 5 bedrooms in Saint-Jean-le-Thomas
120 € to 145 € per double room
Facing the Mont Saint-Michel : 7 km as the crow flies, the château is an elevated location on a hill above a small village of Saint-Jean le Thomas (choice of restaurants : 5mn walk). During the last world war General Eisenhower was « l'hôte…
Located 5.5 km from Jullouville
Favourite 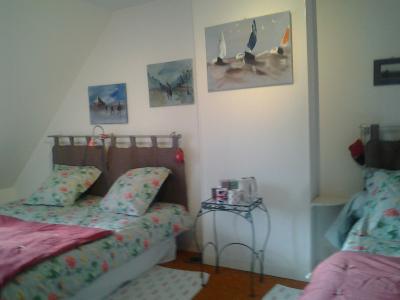 View of the Mont Saint Michel
10
2
House with 1 bedroom in Dragey-Ronthon
48 € per double room
Our house between land and sea, in a grove of Environment, led by cows, horses. We like to tell our rural life, we are attached to our agricultural roots that we reinforce our sound values, simplicity and authenticity. It is a real pleasure…
Located 8.5 km from Jullouville
Favourite 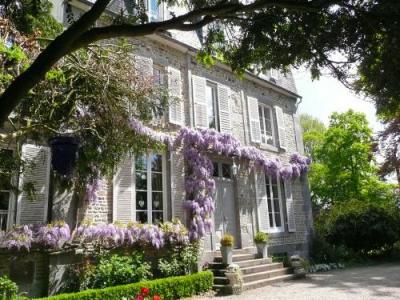 Secret garden
9.5
6
House with 2 bedrooms in Marcey-les-Grèves
93 € to 95 € per double room
Located in the bay of Mont Saint Michel, our guest house is 2 minutes from the A84. You first discover the landscaped garden of 1 ha, enclosed by walls, with many intimate corners in which to bask. It feels good in this house of the nineteenth…
Located 16.4 km from Jullouville
Favourite
All bed & breakfasts around Jullouville 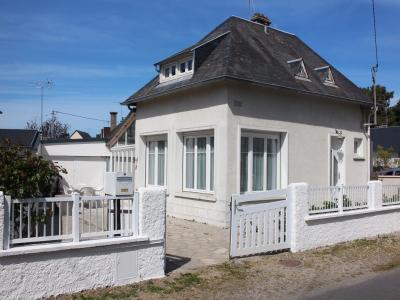 Charming villa in Jullouville
Villa for 8 people in Jullouville
80 m², 3 bedrooms
370 € to 680 € per week
House located 400 m from the sea and the city center of Jullouville (shops including super u, butcher, delicatessen, pharmacy, restaurants, flowers…) in a place sufficiently retired to be very quiet, overlooking the countryside of Bouillon.…
Located Jullouville away
Favourite 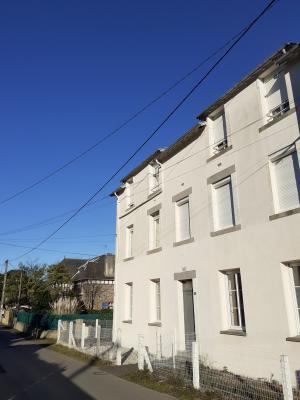 Apt 28 m bright 150 m from the sea 2/4 pers
Apartment for 4 people in Jullouville
28 m², 1 bedroom
350 € to 742 € per week
The charming residence Palme emerald in Jullouville-Edenville, welcomes you to the 2nd and last floor. At 150 m from the beach, walk, enjoy the sea, the sandy beach: beach games, fishing and angling, cycling, water sports.. Just like hiking…
Located Jullouville away
Favourite 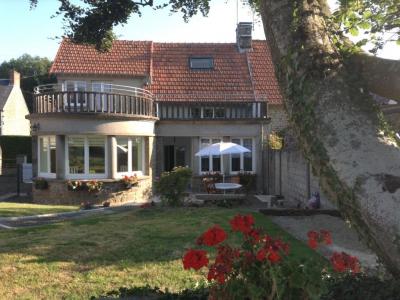 Villa Monfort
9.8
4
House for 7 people in Champeaux
120 m², 3 bedrooms
525 € to 665 € per week
This is a fully renovated house of 120 sqm, located in a hamlet 150 m from the cliffs of Champeaux. It is therefore sheltered from the wind and noise of the small road, and near a magnificent view of the bay of Mont Saint Michel. Its three bedrooms…
Located 4.3 km from Jullouville
Favourite
All vacation rentals around Jullouville 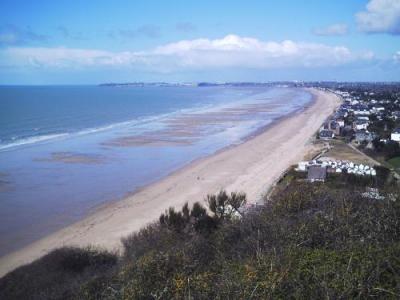 Yelloh ! Village Les Îles
Campsite in Hudimesnil
276 pitches on 14ha
31 € to 80 € per day (2 pers / tent / car)
The Yelloh! Village is located at the gates of Granville and the Bay of Mont Saint Michel. It is open from April 2 to September 19,2021. Spend an unforgettable stay in our new rentals with all the comforts of home. Our spacious pitches have…
Located 11.2 km from Jullouville
Favourite 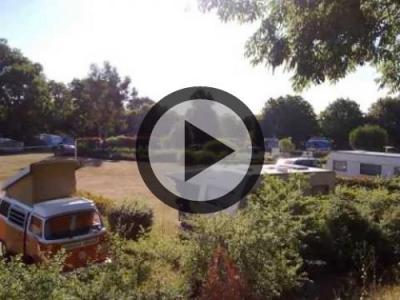 Hôtel des Pins
7.1
369
Hotel in Jullouville
Located in Jullouville-les-Pins, Hôtel des Pins features a restaurant, bar, terrace, and free WiFi throughout the property. The hotel has family rooms. At the hotel, each room is fitted with a wardrobe, a TV and a private bathroom. Guests at…
Located Jullouville away
Favourite 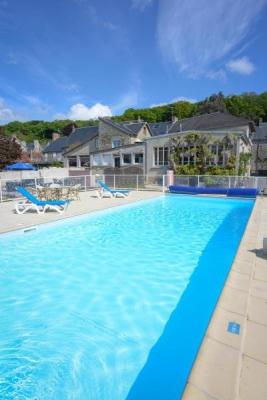 Hotel Restaurant Des Bains
8.0
58
Hotel in Saint-Jean-le-Thomas
Room from 45 €
Set in 400 m² of mature gardens, the Hotel des Bains is just 35 km from Mont Saint Michel, in the Mont-Saint-Michel Bay. It offers en suite accommodation with a heated outdoor swimming pool. The guest rooms at Hotel Des Bains have a TV and a…
Located 5.7 km from Jullouville
Favourite
All hotels around Jullouville