Ranked among the Most Beautiful Villages of France, Gassin is located in the Var department, in the Provence-Alpes-Côte d'Azur region. Close to the famous seaside resort of Saint-Tropez, the town is 200 meters above sea level, above the gulf of the same name. Offering a façade on the Mediterranean Sea, Gassin is also bordering Ramatuelle, and takes place in the heart of the Massif des Maures.

Populated since the Neolithic period, Gassin was occupied for a long time by the Saracens, before strengthening and becoming the city that we know today from the sixteenth century. The development of seaside tourism in the region at the end of the 19th century will bring a steady stream of visitors to the village, notably thanks to the installation of a railway.

Today, the Provençal town is known as much for its natural heritage as for its exceptional monuments that dot all the old center. The proximity to the Mediterranean Sea also gives it a great success with tourists from all over the world.

Rich in tortuous lanes and picturesque houses, the village of Gassin is full of tourist sites to discover during a stay.

Set in a small park, the Notre-Dame-de-l'Assomption chapel is one of the most beautiful monuments in the town. Built at the end of the 11th century, it still hosts a mass at the village festival. In stone and Romanesque style, the building also serves as a summer home for classical music concerts.

The new Notre-Dame-de-l'Assomption church, which replaces the chapel since the 16th century, houses various objects classified in the inventory of Historic Monuments. Visitors can admire a statue of the Madonna and Child of the seventeenth century, an 18th century bell, a statue of Christ from the 16th century, or a bust of reliquary of Saint Lawrence from the 17th century. The building is designed directly on the rock.

In the territory of Gassin you can also discover various monuments inscribed in the general inventory of Cultural Heritage, such as different farms, the presbytery of the 17th century, the remains of a medieval tower, the monument to the dead of the war of 1914- 1918, or the bourg castle of Bourrian.

Small originality of the village, one can discover the smallest street in the world. Indeed, the Androuno does not allow the passage of a man of face, and measures only 29 centimeters wide at its narrowest level.

Today housed in a private home, a blockhouse type R680 can still be seen at Gassin.

Labellisé Jardin Remarkable, the private garden of Marie-Thérèse The Hardy-Halos allows to discover several hundred vegetal species coming from Provence or the Mediterranean.

But Gassin is also very popular for its beaches, and has three: the Moune, the Bouillabaisse, and the Treizain. A sailing school takes place on the latter, and a coastal path allows to follow the sea until Saint-Tropez. Three marked trails allow you to appreciate the surroundings of the village, such as the Provencal forest or the Massif des Maures. Picnic tables allow stops.

Facing the sea, the golf of Gassin is appreciated by amateur sportsmen. 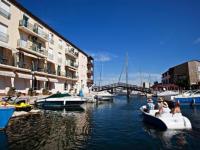 In February, the Enduro des Trois Caps is a pedestrian race that passes through the village.

From Saint-Tropez, the race of Granfondo crosses every year Gassin in April.

Every year during the summer, the actor Leonardo DiCaprio organizes an auction at Gassin in favor of his personal foundation. Many international personalities participate.

On the second Sunday of August, the village celebrates its patron Saint Laurent, including masses in Provence, a meal or musical entertainment.

All leisure activities around Gassin

All outings around Gassin 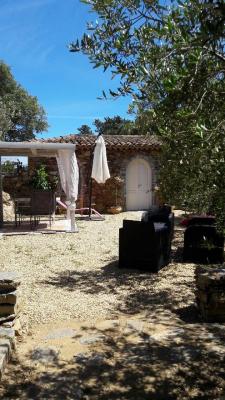 The House of Olives
House with 1 bedroom in Cogolin
120 € to 150 € per double room
Charming little guest house for two people, located in the middle of a private park between vineyards and olive groves. It is located 10 km from Saint Tropez and 5 km from Cogolin beach. Access is completely private as well as parking. It consists…
Located 3 mi from Gassin
Favourite 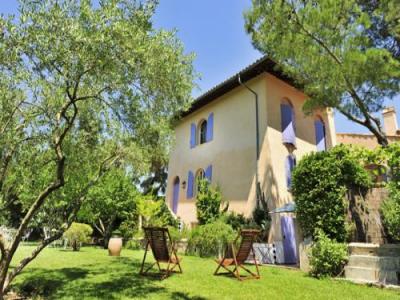 Le Mazet des Mures
9.2
28
Farm with 5 bedrooms in Grimaud
75 € to 110 € per double room
An old farmhouse, completely restored, with a new addition. The 6 studios are all different and very comfortable for 2-4 persons. With kitchenette and private bathroom. Terraces. The 5 bedrooms (for 2-3 persons) are recent, each with private…
Located 4 mi from Gassin
Favourite Villa Fontane Provence
SPECIAL OFFER
NEW
House with 3 bedrooms in Grimaud
90 € to 140 € per double room
Near Saint-Tropez, a house in the artistic soul to relax and discover Provence… Discover our guest house with heated pool. A few kilometers from Saint-Tropez, in the countryside, Alban and Jane welcome you to their beautiful house in Provence.…
Located 6.1 mi from Gassin
Favourite
All bed & breakfasts around Gassin 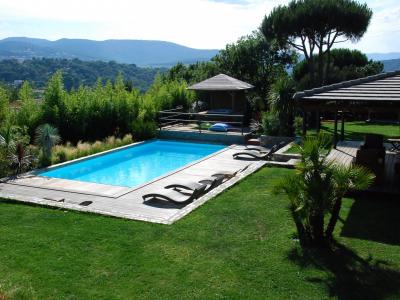 Kazako
10
1
Villa for 6 people in Gassin
200 m², 3 bedrooms
2800 € to 5200 € per week
In the commune of La Croix Valmer, Port Cros National Park, at the foot of Gassin (one of the most beautiful village in France), we rent our house from June to September. Located in a quiet and quiet place in the protected area of ​​three caps…
Located Gassin away
Favourite Chalet, Parc Montana Golfe de Saint Tropez
NEW
Chalet for 6 people in Gassin
40 m², 2 bedrooms
500 € to 1250 € per week
A holiday in the Provence under the Mediterranean sun, who is not dreaming about it? Looking for a nice place with entertainment for all ages? For famous beaches, shopping, travel and good food in one of countless restaurants in the region of…
Located Gassin away
Favourite
All vacation rentals around Gassin Camping La Beaumette
9.4
14
Campsite in Sainte-Maxime
75 pitches on 1.5ha
17 € to 30 € per day (2 pers / tent / car)
3 stars new standard family camping on the Riviera in Sainte Maxime in the famous bay of Saint Tropez. The campsite is 300 meters from the Carrefour shopping center, 150 m from the Leon Gaumont cultural center with its 3 cinemas and 2.5 km from…
Located 6.9 mi from Gassin
Favourite 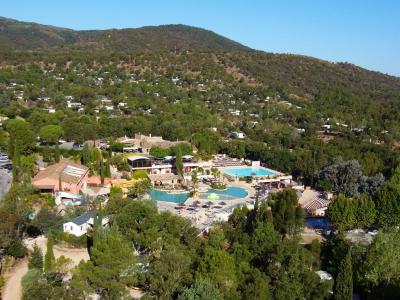 Domaine de la Bergerie
Campsite in Roquebrune-sur-Argens
700 pitches on 60ha
30 € per day (2 pers / tent / car)
5 Star campsite in the Var Between the sea and the hills, in the shade of cork oaks and pine trees, the 60 ha site of Domaine de la Bergerie, filled with green and peace, welcomes you for a holiday surrounded by the sweet scents of the Provence.…
Located 12.6 mi from Gassin
Favourite
All campsites around Gassin Les Camelias de Julienne
9.3
70
Hotel in La Croix-Valmer
Room from 72 €
With an outdoor pool and a garden with a bowls playing area, this residence offers modern apartments that can accommodate up to 4 people. The beaches of Cavalaire and Cap Lardier are 4 km away. Free Wi-Fi access and a flat-screen TV with a DVD…
Located 1.5 mi from Gassin
Favourite Guide of the Var
Unmissable places and recommendations in the Var
French Riviera
Guide to the territory - Tourism and staying here
Provence
Guide to the territory - Tourism and staying here
Outings in the Var
Ideas for walks and hikes in the Var
Photos of the Var
Photos of the Var to view and download
Hotels in the Var
A wide choice of hotels with reductions of up to 70%.
Vacation rentals in the Var
Self-catering holiday homes, gîtes and apartments
Bed & breakfasts in the Var
Rooms from local hosts offering a personal welcome.
Campsites in the Var
Open-air accommodation.
Restaurants in the Var
Regional and international cuisine, style of restaurant and menus.
Leisure activities in the Var
A great selection of activities including sports, well-being, gourmet food and entertainment.
Your holidays
By continuing to browse our site, you are agreeing to the use of cookies to improve your experience and make targeted offers.
Find out more and make settings