Flavignac is a commune of Haute-Vienne, in the region of New-Aquitaine, 20 km south-west of Limoges.

The territory of the locality consists essentially of a plateau which is leaned south to the foothills of the Chalus mountains, which constitute the western end of the Massif Central.

Crossed by the courses of Arthonnet and Brouillet, the town which includes a village and many hamlets, some of which were once autonomous parishes, was in the Middle Ages and under the Ancien Régime a prosperous lordship. In the eighteenth century, Cardinal Loménie de Brienne, from the family that dominates Flavignac and his region, is Louis XVI's finance minister. Little wooded in the nineteenth century, the local is moving towards cattle breeding and becomes one of the cradles of the Limousin race.

Located on the road to Saint-Jacques, along the way from Vézelay, Flavignac has preserved a historical heritage of interest and offers visitors a green nature. A leisure base around a lake, near the village, is an additional asset in the summer. What justify a stage in this town of about 1060 inhabitants that belongs to the Regional Natural Park Périgord-Limousin.

The Church of the Assumption of the Most Holy Virgin is the jewel of the religious heritage of the town which has many buildings listed in the supplementary inventory of historical monuments. The building dates from the 15th century when a primitive church dedicated then to Saint-Martial was remodeled and enlarged (a chapel to the south, a transept instead of the choir and an enlarged nave with a new bay were added). In the sixteenth century, is erected a singular hexagonal tower-tower. Yet, despite its south facade with a portal of beautiful craftsmanship, the wealth of the church rests in its furniture (altarpieces and statues from the fifteenth to the eighteenth century) and especially its "treasure" reliquaries discovered in 1949 dating for some of the thirteenth century. A shrine (decorated chest) also houses the skull of a Roman martyr. Over the years, other sacred objects from neighboring parishes have completed this ensemble, such as a shrine of the martyrdom of St. Valerie, an Italian monstrance of 1800 and the furniture of the small rural church of Texon, from which also comes a statue of St. Peter of the fifteenth century. The church and its treasure are accessible every day from 10h to 17h.

Still in terms of heritage, to see then, in the charming hamlet of Texon, the church of Saint-Pierre-ès-Liens (15th century), in front of which was installed a granite altar dedicated to a pagan worship during Antiquity and which served then funerary monument, and in a different register, the Graules bridge, of medieval origin. It is a set of granite slabs placed on piles to cross the Arthonnet.

On the civil side, the castle of Faye is worth a look. This beautiful 18th century building in classical style was built on the foundations of a medieval manor adjoining an old priory and consists of a large house with two low wings. The ground floor has retained Louis XVI decorations. We can still see the traces of the old French gardens. A time transformed into a summer camp, the castle is being restored.

We will not forget finally the cylindrical dovecote of the Ribière, which dates from the end of the Middle Ages. Covered with lauzes, the roof rests on the vault, and does not have a frame.

In the town itself, the end of this discovery trail may include the garden of the presbytery, where a collection of perennials has been collected.

Finally, the pond or the lake of Saint-Fortunat, vast of six hectares, was arranged close to the center. A beach allows to reconcile idleness and supervised bathing in summer. Playgrounds, a petanque court, a tennis court and picnic tables equip the site, and a campsite is also waiting for visitors or holidaymakers. Fishing is allowed from the end of March to mid-October. Information on the activities of this leisure center on +33 5 55 39 11 14.

The lake and its base are also the starting point of several hiking and mountain biking trails. Routes connect the hamlets, the points of interest of the inheritance, the natural sites of the commune and its surroundings. It is also possible to take a few kilometers on the road to Saint-Jacques. Documentation and information on +33 5 55 58 28 44 or +33 9 60 07 30 07.

For hikes, workshops and events highlighting the heritage and the environment, it is finally relevant to contact the house of the Regional Natural Park Périgord-Limousin at +33 5 53 55 36 00. Campsites in the Haute-Vienne
Contact the managers directly with no middleman to pay. Book your stay at an exceptionally low price!
See selection

Campsites in the Haute-Vienne
Contact the managers directly with no middleman to pay. Book your stay at an exceptionally low price!
See selection L'Escale Gourmande
9.3
8
French cuisine restaurant in Châlus
15 € per person
L'Escale Gourmande, Restaurant Châlus in Haute-Vienne, invites you every day at his table for you to discover traditional cuisine
Located 6.4 mi from Flavignac
Favourite Masnaud Farm
Apartment with 2 bedrooms in Dournazac
50 € per double room
By the farmer and his family: 2 bedrooms (wc and common bathroom) with a lounge; independent access, 6 people max. Peasant Table d'hôte (15 people). Production of fat ducks (500 / year) "from the farm to the plate" to ensure the best traceability.…
Located 10.2 mi from Flavignac
Favourite 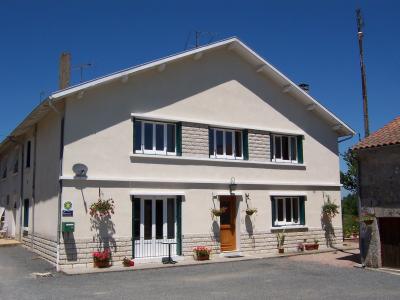 La pause
9.5
7
House with 2 bedrooms in Rilhac-Rancon
52 € to 55 € per double room
Two rooms (4 persons) in the house located in a quiet area in a village a few minutes from Limoges (9 km) from the highway A20Paris-Toulouse, 2 km of the ramp (exit 28) and rn intersection. 520 directions Angouleme, Poitiers and Périgueux. Suitede…
Located 17.5 mi from Flavignac
Favourite
All bed & breakfasts around Flavignac The sundial87
9.7
3
Apartment for 4 people in Saint-Yrieix-la-Perche
54 m², 2 bedrooms
220 € to 350 € per week
At the gates of Périgord and Corrèze, apartment on the ground floor of the house owners. Prefectural classification : 3 stars - It is totally independent, It is located in a very quiet area, close to the lake (bathing and fishing) and the city…
Located 13.7 mi from Flavignac
Favourite Le Sanctuaire
SPECIAL OFFER
House for 15 people in Saint-Saud-Lacoussière
400 m², 6 bedrooms
2875 € to 3195 € per week
Le Sanctuaire is a townhouse consisting of three floors covering 400 m² fully equipped with all modcons. There is free WiFi throughout the property including the extensive terrace area. There is ample parking in the front. Each floor has a bathroom…
Located 17.2 mi from Flavignac
Favourite Maison Lavaud
9.3
4
House for 2 people in Cieux
35 m², 1 bedroom
300 € to 410 € per week
The cottage/gite Maison Lavaud offers self catering accommodation, and is an ideal base to explore the Haute Vienne and the Limousin region of France. The cottage/Gite has Satellite tv, WiFi internet and Pets are welcome. The property is on…
Located 21 mi from Flavignac
Favourite
All vacation rentals around Flavignac 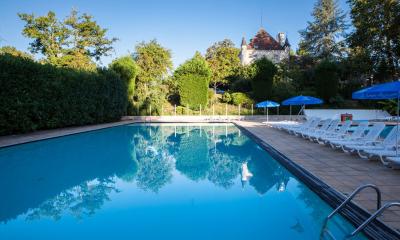 Château le Verdoyer
7.6
1
Campsite in Champs-Romain
170 pitches on 23ha
18 € to 30 € per day (2 pers / tent / car)
Calm and comfort in the heart of the Parc Naturel Périgord Limousin : Gastronomy and Nature...
Located 18 mi from Flavignac
Favourite The ripole
8.8
1
Campsite in Abjat-sur-Bandiat
35 pitches on 6ha
13 € to 1750 € per day (2 pers / tent / car)
Camping La Ripole is 6 ha of hilly terrain, partially shaded, landscaped by a pond with swimming pool and relaxation area with sauna. Ideally located for nature lovers and lovers of authentic scenery and hiking. Various entertainment will be…
Located 18.8 mi from Flavignac
Favourite 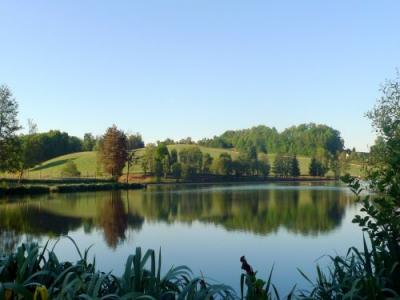 Camping de Montréal
9.2
47
Campsite in Saint-Germain-les-Belles
60 pitches on 2ha
1760 € to 1910 € per day (2 pers / tent / car)
Camping de Montréal. Quiet campsite*** close to Limoges 87, exit 42(a few minutes from the A 20), on the border of the Corrèze and the Dordogne. Pitches/ Bungalow tents/ Chalets. A campsite with a pool and restaurant, on the shore of a lake…
Located 21 mi from Flavignac
Favourite
All campsites around Flavignac 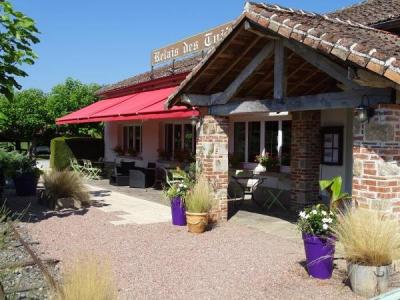 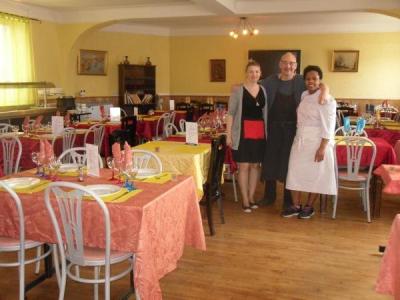 l'escale gourmande
5.3
46
Hotel in Châlus
Room from 36 €
L'escale gourmande has a restaurant, free bikes, a bar and shared lounge in Châlus. There is a terrace and guests can make use of free WiFi and free private parking. All guest rooms in the hotel are fitted with a flat-screen TV. Guest rooms…
Located 6.4 mi from Flavignac
Favourite