Asnières-sur-Seine is a town in the Hauts-de-Seine in the Île-de-France region, northwest of Paris.

Located less than 10 km from the center of the capital, the city hitherto enclosed in a loop of the Seine developed remarkably from the construction of a bridge over the river in 1926, connecting it directly to Clichy And the 17th arrondissement.

Until 1850, the village, formerly owned by the abbots of Saint-Denis, has only a thousand inhabitants and its activity is essentially agricultural.

With the arrival of the railway, its economy diversifies during the second half of the nineteenth century (services, industry) and its green environment on the banks of the Seine makes it a place of walk for the Parisians and soon also a residential city.

Asnières became Asnières-sur-Seine in 1968 has maintained its dual vocation of city to the preserved environment (many parks adjoining the real estate complexes) and hosting zones of tertiary activities (offices, shops) created to Substitute for industrial units.

Its heritage and its cultural vitality justify a visit during a stay in the Paris region.

Discover the heritage of Asnières-sur-Seine begins with that of its oldest remarkable building: a beautiful castle built in 1750 for the Marquis de Voyer d'Argenson. His plans were drawn by Jacques Hardouin-Mansart, architect of the king, and his interiors were also decorated by renowned artists. Now the property of the town, it has been restored and is a fine example of residential architecture of the 18th century. Free visit (by following explanatory panels) or guided (on Saturday afternoon or on registration). Price: from 1.50 to 3.50 euros. Free on the first Sunday of the month from 14h to 17h. Information on +33 1 71 07 82 25.

Also worth seeing is the church of Sainte-Geneviève, rebuilt at the beginning of the 18th century to replace a first church of the twelfth century become too cramped. It will be noted that the portal is surmounted by a modern statue of Saint Genevieve, a replica of that of the Sacred Heart of Montmartre. The bell tower on a square tower is also interesting.

More recent, the town hall built from 1897 to 1899 is reputed to be representative of republican state architecture. Its majestic character (façade adorned with bas-reliefs) and its interior layout (staircase, gallery, wedding hall and carved cupolas, not to mention paintings by Paul Signac) demonstrate a genuine desire to endow the then booming city with A prestigious building.

In a different genre, the Vuitton Museum, which adjoins the historical workshops of the famous brand, was installed in an Art Nouveau house. Home to the original works and the archives of the society, it is open to the public in a very punctual way (only a few days a year). For more information, please call +33 1 71 07 82 25.

A site has also contributed to the notoriety of the city: the cemetery of the animals (also called cemetery of the Dogs). Created in 1899, there are the burials of cats, dogs, birds, horses... or lions. The funerary monuments are sometimes monumental or even extravagant. To see in particular, the monument to the glory of Barry, a dog of the monks of the hospice of the Great Saint Bernard who saved 40 people, or that paying homage to the police dogs victims of the duty. There are also some famous animals (such as Rintintin) or famous celebrities (Saint-Saëns, Courteline, Sacha Guitry). Plan distributed at the entrance. Closed on Mondays and holidays except November 1st. Price: 1,50 and 3,50 euros. Information on +33 1 40 86 21 11.

For a more complete tour of the city, note that thematic tours have been designed. "Urban walks" are also organized with guide (price: 2 euros). Brochures and information on +33 1 71 07 82 25.

Some of these tours pass through one of the city's 19 squares and gardens (which has a total of 38 hectares of green space).

Playgrounds for children and teenagers equip most of these squares and parks, but one will be particularly interested in those who border the Seine, such as Robinson Park, to find some of the landscapes that inspired in the nineteenth century many painters Impressionists (Van Gogh, Seurat...). Map available at the Tourism Office, Tel. : +33 1 71 07 82 25.

In the same spirit, we will not forget the marina baptized precisely Port Van Gogh, between the bridges of Clichy and Gennevilliers. It hosts about fifty boats and is a pleasant place to stroll... Where once used to embark for canoe trips on the Seine.

For the sportsmen, several quality equipments are at disposal.

From March to July, four evenings are scheduled under the title "Les Rendez-vous du XVIIIe". Conferences or concerts at the castle having as common point the century of the Enlightenment. Booking on +33 1 71 07 82 25.

On the second Sunday of June, at the chateau, the Journée du Livre brings together a hundred authors. On the program, meetings, readings and signing sessions.

On the first Saturday in October, Asnières celebrates its Nuit Blanche. The program includes night visits to the animal cemetery, concerts and theatrical performances.

The second weekend of October, Open House is organized in workshops of artists (glassmakers, plastic artists...). An appointment organized in conjunction with the neighboring towns of Bois-Colombes, Colombes and Gennevilliers.

All leisure activities around Asnières-sur-Seine Studio Gabrielle
9.8
5
Apartment with 1 bedroom in Paris
85 € to 100 € per double room
For business or vacation in Paris, we propose a comfortable studio for. Rent close to Place de la Nation on a daily, weekly or a long-weekend basis. Completely renovated in 2008, this studio located on the 5th and top floor (same as the owners)…
Located 7 mi from Asnières-sur-Seine
Favourite

Les Chambres de Sacaly
9.6
6
House with 2 bedrooms in Saclay
75 € per double room
Véronique and Pierre Brandeis welcome you all year long in their lovely house in the heart Essonne. Friendliness, warmth, authenticity, all combine to make their bed and breakfast a place of relaxation and comfort in pleasant surroundings. Close…
Located 13.8 mi from Asnières-sur-Seine
Favourite
All bed & breakfasts around Asnières-sur-Seine

Paris, Luxembourg Gardens, Apartment 96 m
Apartment for 4 people in Paris
96 m², 2 bedrooms
1200 € to 1440 € per week
You look for accommodation in Paris to visit Paris Area (Versailles, Disney,...) or to accommodate your family or friends for a few days. We offer our apartment located in the 6th, near the Luxembourg Gardens. 1st floor, entrance, large living…
Located 5 mi from Asnières-sur-Seine
Favourite 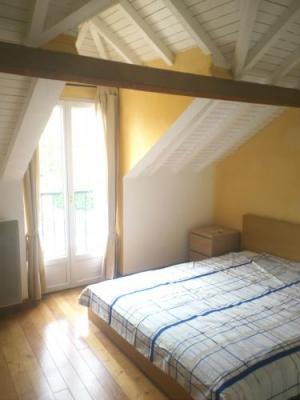 La maison de Catherine et Christian
9.0
2
House for 6 people in Bouafle
70 m², 3 bedrooms
580 € per week
Old house completely renovated, all comfort in the village of 2000 inhabitants 1 km from the A13 and A14. is 40 km from paris 30 km from Versailles and 1h40 deauville.
Located 17.6 mi from Asnières-sur-Seine
Favourite
All vacation rentals around Asnières-sur-Seine

Camping de Paris
8.3
22
Campsite in Paris
510 pitches on 7ha
2810 € to 4080 € per day (2 pers / tent / car)
Right in the green center of Bois de Boulogne along the river Seine. The campsite of Paris extends over an area of 7ha. An ideal place to go and visit Paris. 510 pitches are available on this beautiful green area. Come with your tent, caravan…
Located 3.8 mi from Asnières-sur-Seine
Favourite Huttopia Versailles
8.6
8
Campsite in Versailles
180 pitches on 4ha
15 € to 25 € per day (2 pers / tent / car)
Versailles camping (Ile-de-France region) enables you and your family to visit the historic town of Versailles, its Château, yet you can also escape to Paris (station rer C Porchefontaine which is accessible from the camping on foot, and be…
Located 10 mi from Asnières-sur-Seine
Favourite
All campsites around Asnières-sur-Seine