Arvière-en-Valromey is a commune of the Ain, in the Auvergne-Rhone-Alpes region, 50 km east of Ambérieu-en-Bugey by road. This is a new municipality created on January 1, 2019 following the merger of Virieu-le-Petit, its headquarters (300 inhabitants), Brénaz (105 inhabitants), Chavornay (222 inhabitants) and Lochieu (90 inhabitants), almost 720 inhabitants now.

The territory of the locality is vast of 37 km ², coming from the natural and historical region of Bugey: it is dominated on the east by the Grand Colombier massif, culminating at more than 1500 m of altitude, crossed by the course of Arvière, which has its source in the heart of the Valromey valley, between the Hauteville plateau and the Grand Colombier massif, which explains the name of the new community.

Rich of a terroir always dedicated in part to the production of cheeses (Comté appellation) and wines (appellation Roussette du Bugey), Arvière-en-Valromey has a historical heritage of interest and highlights its environment of exception appreciated by the amateurs of tourism green (hikes), the departmental museum of Bugey-Valromey proving another asset justifying a stage at the foot of the Grand Colombier and its pass became mythical thanks to the Tour de France cyclist.

The departmental museum of Bugey-Valromey established since 1974 on the small village of Lochieu is a magnificent example of preserved heritage and a cultural site that can please all audiences. Created by an association, now owned by the Department, it includes a beautifully restored 16th century Renaissance house, refurbished barns and modern buildings whose architecture is in keeping with older buildings.

The collections presented, built up over the decades by the association "Sites et monuments du Valromey" and supplemented by public organizations, are presented to the public in a thematic way. A permanent exhibition evokes "The domestic life in Bugey" from 1850 to 1950, the daily life of these mid-mountain inhabitants (work, beliefs, furniture...) and another the history of this region. They are housed in the Renaissance house.

Objects related to agriculture and crafts (including woodworking) are presented in the annex buildings.

Art is not forgotten, far from it. With paintings, engravings and photographs of famous artists that evoke the Bugey, but also a singular permanent exhibition gathering some 200 contemporary works in turned wood.

It is still on this same old village of Lochieu that are located the remains of the Carthusian Arvière (or Arvières), a monastery founded in the twelfth century in the heart of the forest, facing the Grand Colombier. Perfectly isolated from the world, the religious lived in some sort in autarky by exploiting a very vast domain thanks to the donations of the lords and bishops of the region. The monks hunted at the Revolution, their forest was aggregated to the public domain, and the buildings of the Carthusian monastery constituted in three poles (conventual, utilitarian - bakery, stables etc - and dedicated to the spiritual solitude) were dismantled. Only the foundations and basements of the church and the monastery remain. But the site, which then housed a forest house and a summer camp (now closed) has retained great interest.

An "ethno-botanical" garden composed in particular of plants such as once cultivated by the monks has been reconstructed, and sculptures evoking the world of Chartreuses have been installed. In addition, the entire estate is classified as a "biological reserve".

This is what makes the old abbey a hiking goal (partly also accessible to motorists) of the first order, since views of the Bugey and the valley, in addition to the remains, await visitors for whom an area is developed. A booklet is available to understand the history and richness of places. Information on +33 4 79 87 51 04 or +33 4 79 81 29 06.

On the village of Virieu-le-Petit, the parish church is worth a look, like the ruins of the old castle seigneurial Mauclerc (XIV). However, the former municipality is especially famous for being the starting point for brave hikers who aim to reach the summit of Grand Colombier.

In fact, the latter is obviously the major asset of the new municipality in terms of leisure activities "nature".

Its summit, the highest point of Bugey, in the south of the Jura mountains, is accessible via a spectacular winding road, but also several footpaths, some of which follow the GR 9 circuit that connects Saint-Amour in the Jura to Saint-Pons- the Blackberries in the Var at the edge of the Mediterranean.

In terms of nature, these hikes also make it possible to apprehend a varied but rich environment, between meadows and forests. Not to mention the waterfalls or small canyons dug by the streams and torrents...

Be careful, some routes are forbidden or very disadvised in winter.

We contact the same number if, before winning the summits, we want to take a break from a cheese producer or a winemaker... 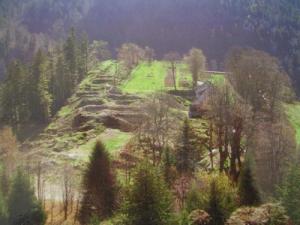 All leisure activities around Arvière-en-Valromey The Clos Luthézieu
Manor with 3 bedrooms in Valromey-sur-Séran
105 € to 120 € per double room
In the Valromey, in the center of a park with multi-century trees, overlooking the nearby Alps and the Grand Colombier, Sylvie and Xavier roy welcome you all year in their property of the eighteenth century, carefully restored and classified…
Located 3.4 mi from Arvière-en-Valromey
Favourite 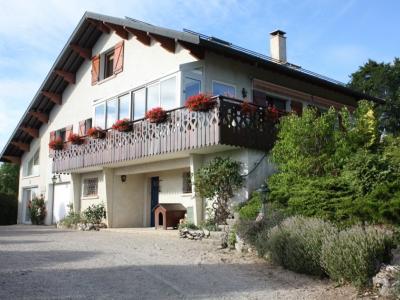 At Agnes and Didier
9.2
3
House with 1 bedroom in Plateau d'Hauteville
50 € to 55 € per double room
Between heaven and earth, Agnes and Didier welcome you to the Grand Dergis Hauteville Lompnes in a guest room with private entrance and mezzanine for 1-4 people. The room is equipped with a snack corner with fridge, kettle and microwave. Nature…
Located 7.8 mi from Arvière-en-Valromey
Favourite La Salicorne
9.7
7
Farm with 4 bedrooms in Vaulx
85 € to 95 € per double room
Old renovated farm located on the outskirts of Annecy... House, House of Wellness, a place to stay in peace...
Located 13.6 mi from Arvière-en-Valromey
Favourite
All bed & breakfasts around Arvière-en-Valromey 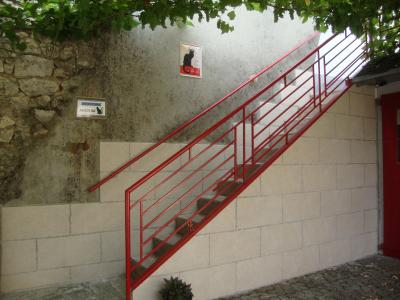 Gite of the black cat
10
8
Apartment for 2 people in Ceyzérieu
35 m², 1 bedroom
300 € per week
Gite all comfort independent in house of the owner. Close to local shops. Private parking in courtyard Large terrace Many sites in the vicinity to visit
Located 5.1 mi from Arvière-en-Valromey
Favourite 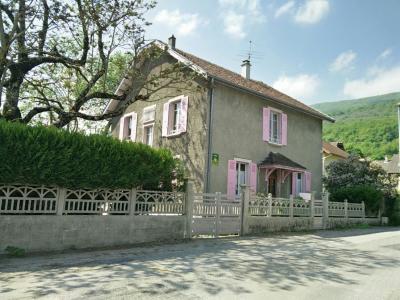 The foot of hind
10
3
House for 14 people in Corbonod
250 m², 6 bedrooms
1000 € to 1100 € per week
Large family home, located on the right slope of the Rhone, at the foot of the neck of Biche (Jura massif), in the center of the hamlet of Gigne. This house surrounded by a walled garden comprises 4 levels : - On the ground floor, a lounge /…
Located 6 mi from Arvière-en-Valromey
Favourite 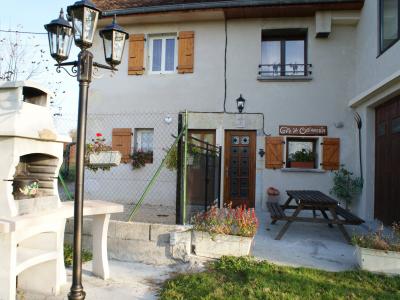 Gîte de la Cab'anerie
9.7
7
House for 4 people in Belley
70 m², 2 bedrooms
380 € to 520 € per week
Lovers of nature and beautiful walks, you will find on-site trails that you can cross on foot, bicycle, or donkeys of Cab'anerie. We are in the bottom Bugey, a country of Brillat Savarin, at the end of the Jura mountains. And the gates of the…
Located 9.7 mi from Arvière-en-Valromey
Favourite
All vacation rentals around Arvière-en-Valromey 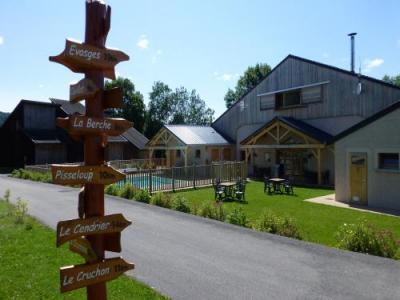 Camping Les 12 Cols
9.5
8
Campsite in Plateau d'Hauteville
100 pitches on 2ha
1650 € to 2450 € per day (2 pers / tent / car)
At 800 m above sea level, in the heart of hauteville lompnes bugey in ain, on a plate of preserved forest and grassland, 12 Cols Campsite welcomes you in an exceptional environment. Away from pollution, in a natural setting of mountain, enjoy…
Located 7.5 mi from Arvière-en-Valromey
Favourite Charmilles
Campsite in Vallières-sur-Fier
76 pitches on -3ha
1850 € to 2250 € per day (2 pers / tent / car)
Our campsite is located between three lakes Annecy, Aix les Bains and Geneva. It is a quiet and semi shaded family campsite. An ideal place for rest and discovery of our region. The countryside at the foot of the mountain. We have 76 semi-shaded…
Located 9.8 mi from Arvière-en-Valromey
Favourite 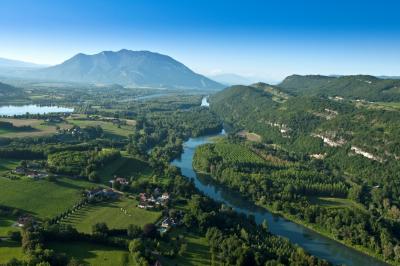 Camping Lake King's Bed
Campsite in Massignieu-de-Rives
132 pitches on 3ha
18 € to 27 € per day (2 pers / tent / car)
Camping 4 * is located in the department of Ain at the gates of Savoy, facing the mountains and the lake of the King's Bed. The campsite is also bordered by the ViaRhôna bike path. The view is beautiful. The region will offer you great opportunities…
Located 9.9 mi from Arvière-en-Valromey
Favourite
All campsites around Arvière-en-Valromey 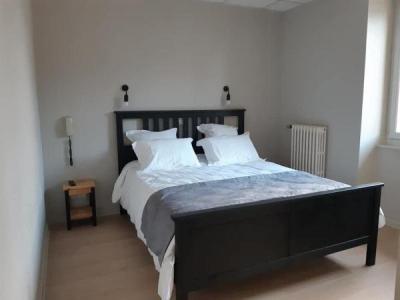 LE HAYLTON
7.7
16
Hotel in Anglefort
Room from 45 €
Situated in Anglefort, LE HAYLTON has a restaurant, bar, garden, and free WiFi throughout the property. Private parking can be arranged at an extra charge. Guests at the hotel can enjoy a buffet breakfast. LE HAYLTON offers a terrace. Geneva…
Located 4 mi from Arvière-en-Valromey
Favourite 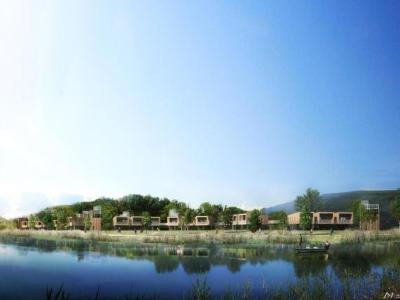 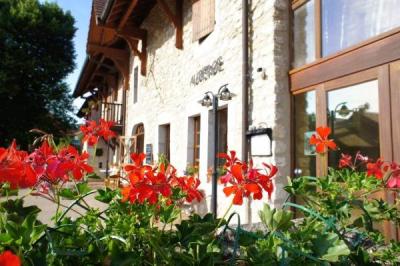 Auberge de Motz
8.7
274
Hotel in Motz
Room from 52 €
Featuring a restaurant and a terrace, Auberge de Motz is located in Motz. Each room features views of the mountains, a flat-screen TV and a private bathroom with bath or shower and free toiletries. Bed linen and towels are included. Breakfast…
Located 6 mi from Arvière-en-Valromey
Favourite
All hotels around Arvière-en-Valromey

Guide of the Ain
Unmissable places and recommendations in the Ain
Alps
Guide to the territory - Tourism and staying here
Jura mountains
Guide to the territory - Tourism and staying here
Outings in the Ain
Ideas for walks and hikes in the Ain
Photos of the Ain
Photos of the Ain to view and download
Hotels in the Ain
A wide choice of hotels with reductions of up to 70%.
Vacation rentals in the Ain
Self-catering holiday homes, gîtes and apartments
Bed & breakfasts in the Ain
Rooms from local hosts offering a personal welcome.
Campsites in the Ain
Open-air accommodation.
Restaurants in the Ain
Regional and international cuisine, style of restaurant and menus.
Leisure activities in the Ain
A great selection of activities including sports, well-being, gourmet food and entertainment.
Your holidays
By continuing to browse our site, you are agreeing to the use of cookies to improve your experience and make targeted offers.
Find out more and make settings