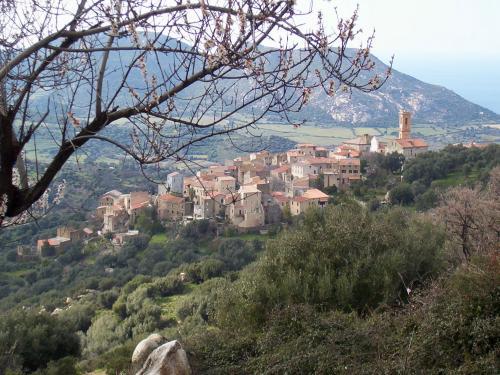 Campsites in the Upper Corsica
Contact the managers directly with no middleman to pay. Book your stay at an exceptionally low price!
Book now

Village Balagne, between Calvi and L'Ile-Rousse, Aregno takes place in Upper Corsica, on the shores of the Mediterranean Sea.

Old and traditional perched village, Aregno was already populated in ancient times, as evidenced by the remains of bronze plaques that belonged to the Vespasian armies found on the spot. Occupied by the Genoese until the middle of the 18th century, the village became French property. Former agricultural city formerly known for its almonds and oranges, Aregno has become today a Mecca of Corsican tourism, especially in the summer time.

Aregno has a unique natural setting with its beaches and countryside, but also an architectural heritage and cultural evidence of strong traditions and ancestral. Dynamic, the Corsican village also offers many events organized throughout the year.

Campsites in the Upper Corsica
Contact the managers directly with no middleman to pay. Book your stay at an exceptionally low price!
Book now

Listed by the Historical Monuments, the church of Trinidad and San Giovanni takes place at 280 meters altitude. Pisan legacy of the eleventh century, it takes place in the heart of a cemetery and reveals a most surprising decoration with its human figures or animals on the exterior facades. In the Trinity Chapel, do not miss the frescoed wall paintings of the mid-15th century. In particular, we can discover the four Doctors of the Church, St. Augustine, St. Jerome, St. Gregory, and St. Ambrose, with a Bible, and St. Michael slaying the dragon.

Corsican Baroque style, the church of Saint-Antoine-Abbé unveils a high ocher bell tower with three floors of arcades. We can appreciate the pink facade with white bands, and inside, several pieces classified as Historical Monuments like the paintings The death of St. Francis Xavier, and The Virgin of the Rosary with St. Dominic and St. Catherine of Siena, or some joinery such as the pulpit and stained-glass stained-glass brotherhood stalls.

Do not miss the ruins of the San Quilicu Chapel, a 10th-century building built in the first village. Abandoned in the eighteenth century, it still allows to admire its foundations.

In the town, you can discover other religious monuments such as the chapel Saint-Michel or the chapel of the Annunziata.

Aregno-Beach unveils a 900-meter strip of sand on the Mediterranean Sea. It is very popular with locals and summer visitors, but it requires great vigilance for the youngest, because it is easy to lose. 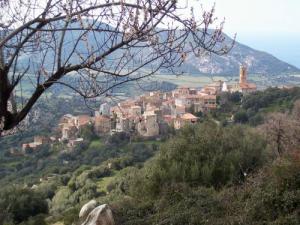 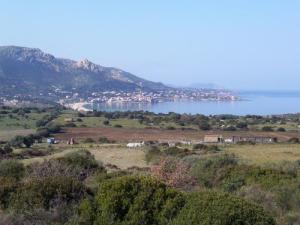 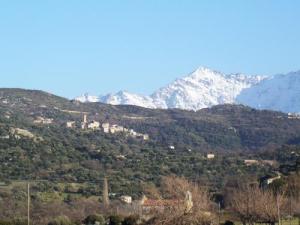 All leisure activities around Aregno L'Acula Marina
9.0
139
Mediterranean restaurant in L'Île-Rousse
25 € per person
FLAVORS MEDITERRANNENNES - The Acula Marina, is first of all a unique location overlooking the beach Caruchettu L'Ile-Rousse in Balagne. Savor fine Mediterranean cuisine and colorful. FRESH - The head works mainly with fresh, home made fish,…
Located 4.4 mi from Aregno
Favourite
All restaurants around Aregno 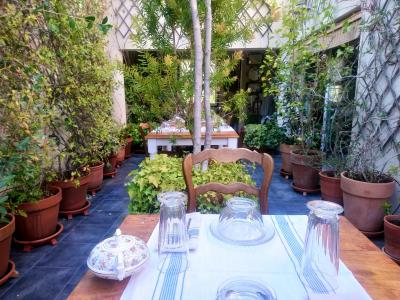 Casa di Emma
8.7
1
House with 3 bedrooms in Santo-Pietro-di-Tenda
64 € to 84 € per double room
Corsica Rooms in Santo Pietro di Tenda between sea and mountains we had 15 km from the beautiful beaches and the seaside resort Saint Florent and 30 minutes from the airport of Bastia - Each room has bathroom and room number 2 and 3 have a terrace…
Located 18.7 mi from Aregno
Favourite
All bed & breakfasts around Aregno 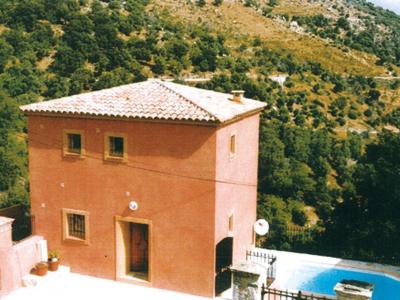 Algajola Location du Ranch chalet
10
2
Chalet for 5 people in Algajola
25 m², 2 bedrooms
350 € to 870 € per week
Between Calvi and L'Ile-Rousse, air-conditioned chalets, recent, 1 km from the sandy beach of Algajola, picturesque village. Back from camping Cantarettu overlooking the small villages of Balagne, calm. For 4 to 5 persons. An area of ​​24m²,…
Located 2.3 mi from Aregno
Favourite 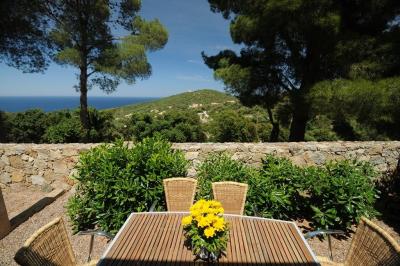 "Blue pine", sea view, 1.5 km beach ; pkg
Apartment for 4 people in Corbara
34 m², 1 bedroom
400 € to 670 € per week
Holiday house with sea view in a wooded property of 9000 m² at 1 km from the sea, shaded parking lot. This cottage has a privileged location: it is located about 1.5 km of sandy beaches and enjoys the same time a campaign environment as it is…
Located 3.1 mi from Aregno
Favourite
All vacation rentals around Aregno Casa Musicale
8.1
105
Hotel in Pigna
Room from 75 €
Offering a terrace and a garden, Casa Musicale is a hotel set in the pedestrian area in Pigna. This hotel offers a musical environment and free WiFi access in public areas. All rooms offer a complete bathroom with bath or shower. Some rooms…
Located 1.3 mi from Aregno
Favourite 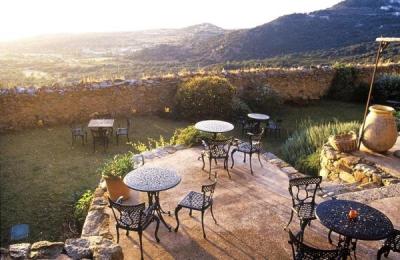 Hotel Palazzu Pigna
8.9
12
Hotel in Pigna
Room from 175 €
Set in Pigna, 2.6 km from Aregno Beach, Hotel Palazzu Pigna offers accommodation with a restaurant, free private parking, a bar and a garden. This 3-star hotel offers room service and free WiFi. The hotel has family rooms. At the hotel, each…
Located 1.4 mi from Aregno
Favourite Ferienhotel Maristella
7.3
285
Hotel in Algajola
Room from 64 €
Boasting an outdoor swimming pool and a tennis court, Ferienhotel Maristella is a german managed property situated in Algajola. Featuring a shared lounge, this property also provides guests with a restaurant. The accommodation features evening…
Located 2.2 mi from Aregno
Favourite
All hotels around Aregno