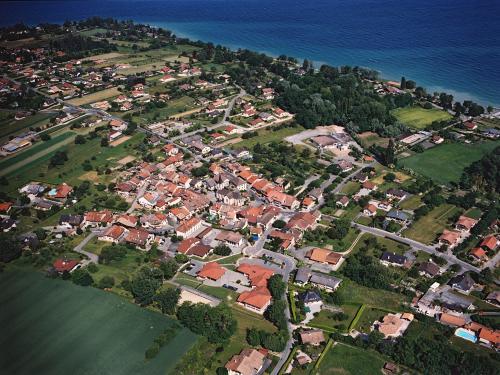 Bed & breakfasts in the Haute-Savoie
Compare reviews, photos and rates with an interactive map. Promotions and weekend offers.
Book now

Anthy-sur-Léman is a commune in Haute-Savoie in the Auvergne-Rhône-Alpes region, bordering Thonon-les-Bains, 15 km west of Evian-les-Bains and 30 km northeast of Geneva, Switzerland).

Named Anthy for centuries, the locality became Anthy-sur-Léman in 1971, for reasons of tourist and economic communication.

A time attached to Thonon-les-Bains, from 1974 to 1983, the municipality regained its autonomy following a referendum.

Bordered by Lake Geneva, the village has more than 2,100 inhabitants, a population that has doubled in 30 years with the creation of residential neighborhoods and the development of commercial areas. Nevertheless, the municipality has retained a green landscape, even if agricultural activity has declined sharply. Tourism, services and fishing, although marginal, are the mainstays of the city's economy, tossed over the centuries like its neighboring cities between Catholicism and Protestantism, between the kingdom of France and the kingdom of Piedmont- Sardinia, adhering even a time to the Swiss Confederation.

Its heritage and preserved character of its borough, the shores of the lake and the natural setting conducive to hiking make the small city a tourist and a holiday resort appreciated.

Bed & breakfasts in the Haute-Savoie
Compare reviews, photos and rates with an interactive map. Promotions and weekend offers.
Book now

A visit of the municipality can begin with some elements of built heritage old. In the heart of the village, typical of the villages of Chablais (historic Savoy), the church of Saint-Barthélemy was rebuilt in the 19th century in a neo-Gothic style, on the site of a chapel which has itself succeeded a First place of medieval worship. The bell-shaped steeple contains two bells, one of which was melted in 1790 and was classified. In the 1960s, stained-glass windows designed by the Savoyard artist René Michaud were laid, as well as a Way of the Cross whose stations are made up of slates from Morzine. An anchor made of wrought iron evoking those of the boats of the lake is also made to serve as lectern (liturgical desk).

Several houses dating from the 19th or 20th century on the civilian side of the lake testify to the residential character of the place. This was the case of Chantrell Castle, which evoked the Petit Trianon, which was surrounded by an English park. The property was unfortunately dismembered. Other residences have more or less resisted the weather, the villas of the doctors Plontz and Alain, the villa Bourgeois and the chalet de la Croisée d'Anthy or the chalets Monod, with a private harbor. In another way, to see the curious Stone of the Sacrifices, a megalith decorated with cupules (small circular cavities dug by man for ritual or utilitarian purposes). In general, successive excavations in the 20th century have revealed numerous remains (objects, burials, coins) proving a human presence from Prehistory to Gallo-Roman times.

On the shores of the lake, there are several private or public docks attesting to the vitality of the activity in terms of navigation. Formerly to go to the other cities bordering Lake Geneva thanks to companies providing regular connections to Geneva in particular, or private "boats", now for more recreational uses. See also, the port of Fishermen, always used.

If the weather is pleasant, five public beaches (with sand or grass) follow each other on three kilometers of coastline to enjoy the joys of swimming (unsupervised) or practice windsurfing or paddle. Information on +33 (0) 4 50 72 64 57.

On the third weekend of April, the Swing'n'Salsa Léman festival offers dance performances.

At the end of June, the Saint-Jean lights are organized on the Plage des Recorts. Playful and musical animations then "conflagration".

On the evening of July 13th, the festival of perch fillets and then a meal and a popular ball, on the beach of the Recorts, precede the celebration of the National Day.

At the end of July, on the same beach, the Festives d'Anthy combine concerts and fun activities. 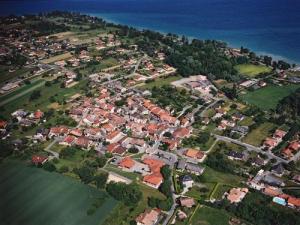 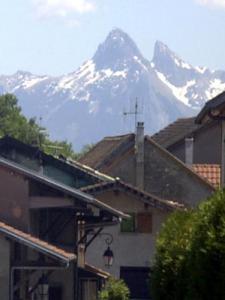 The roofs of Anthy
See photo

All leisure activities around Anthy-sur-Léman Auberge d'Anthy
9.1
228
French cuisine restaurant in Anthy-sur-Léman
34 € per person
In Haute-Savoie, near Thonon Evian and Mont Blanc, the Inn of Anthy pampers guests since 1927. This longevity speaks volumes about the quality of this place! The restaurant has the title of Master restorer. The dishes are homemade. This hotel…
Located Anthy-sur-Léman away
Favourite Les Tournesols
9.0
82
French cuisine restaurant in Thonon-les-Bains
28 € per person
Place to relax... - Close to Lake Geneva Lake enjoy an air puff to the Sunflowers. This restaurant has a pleasant and bright environment that promotes a relaxed atmosphere. ... and tasting - the cuisine, come and treat yourself to appetizers…
Located 1350 yd from Anthy-sur-Léman
Favourite 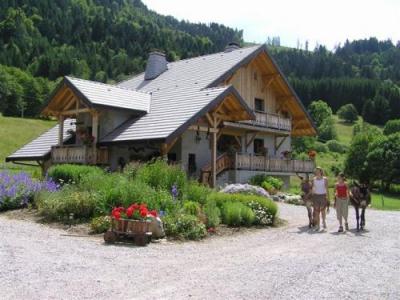 Au Pré de la Basse
9.7
46
Chalet with 5 bedrooms in Orcier
80 € per double room
Happiness is in the meadow. In a green setting, surrounded by nature with panoramic views of the mountains, Lake Geneva and the Swiss banks, we have built our cottage near the neck of fire in accordance with the Savoyard architecture. We are…
Located 5.2 mi from Anthy-sur-Léman
Favourite 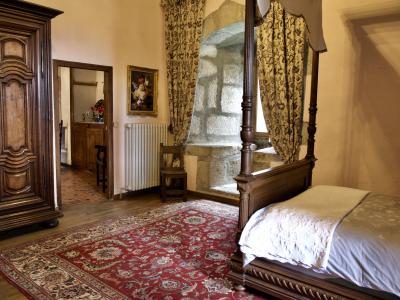 Apartment Marquis
Castle with 5 bedrooms in Brenthonne
120 € to 165 € per double room
What could be more magical than sleeping one or more nights in a real castle? You will be transported into another world, but with all the modern comforts as our 5 rooms are large, heated, equipped with separate bathrooms, private with real-poster…
Located 5.9 mi from Anthy-sur-Léman
Favourite 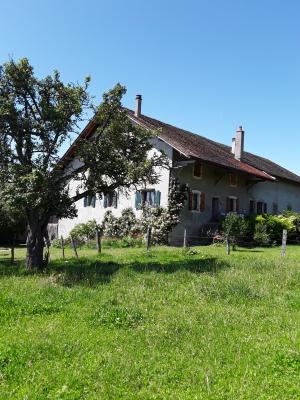 Domaine de Senoche the rooms of Sylvie
SPECIAL OFFER
Farm with 2 bedrooms in Ballaison
70 € per double room
Sylvie and Robert welcome you to their family house Winery of Senoche, which is at the top of the vineyard of Bas-Chablais, overlooking Lake Geneva and the Jura. Your hosts offer two comfortable and cozy. They invite you to discover their wines…
Located 6.5 mi from Anthy-sur-Léman
Favourite
All bed & breakfasts around Anthy-sur-Léman 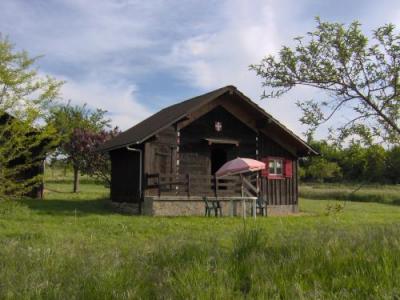 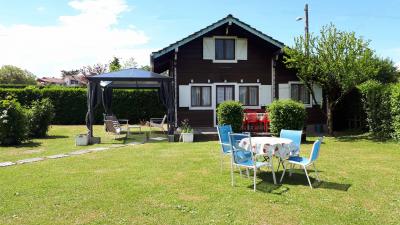 Chalet Ô Léman, chalets for rent in Savoy
9.5
11
Chalet for 5 people in Excenevex
45 m², 2 bedrooms
525 € to 850 € per week
The chalets (2) are located 600 meters from the only sandy beach of Lake Geneva and 300 meters from the village of Excenevex, on a small hill overlooking the lake with views of the nearby mountains. Quiet and relaxing corner with a large green…
Located 3.7 mi from Anthy-sur-Léman
Favourite 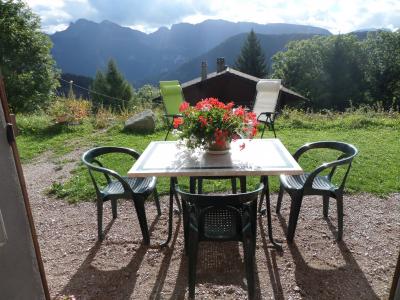 Camping du chatelet
8.9
3
Campsite in Sciez
144 pitches on 3.2ha
15 € to 23 € per day (2 pers / tent / car)
Three stars campsite situated in Haute-Savoie (France), on the shores of Lake Geneva, 300 meters from the beach and the marina of Sciez-sur-Léman, in a quiet and green place. Pitches for tents or caravans. Rental of comfortable cottages 4 /…
Located 1.7 mi from Anthy-sur-Léman
Favourite 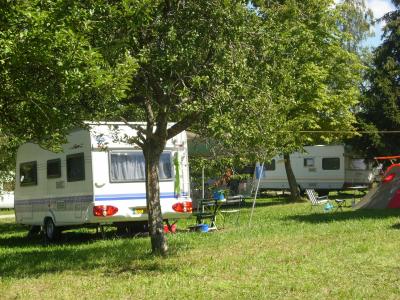 The Orée des bois
Campsite in Sciez
40 pitches on 1.5ha
17 € per day (2 pers / tent / car)
Located between lake and mountain in the commune of Sciez on Lake Geneva, our campsite welcomes you in a quiet and green and offers spacious, flat, grassy and shaded pitches. Our campsite is located 1 km from the lake and the beach and supervised…
Located 2.3 mi from Anthy-sur-Léman
Favourite
All campsites around Anthy-sur-Léman 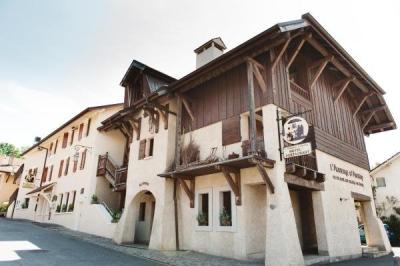 Auberge d'Anthy
8.2
119
Hotel in Anthy-sur-Léman
Room from 65 €
Located 300 metres from Lake Geneva, between Genéve and Thonon-les-Bains, Auberge d’Anthy offers a bar and local restaurant specialising in fish caught from the lake. Guests are invited to the terrace or the garden. Free WiFi access is provided…
Located Anthy-sur-Léman away
Favourite 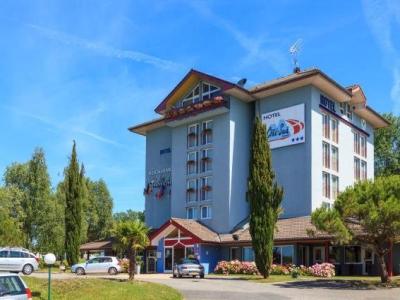 ibis budget Thonon Les Bains
7.9
1186
Hotel in Thonon-les-Bains
Room from 48 €
Located in the centre of Thonon-les-Bains, 12 km from Évian and 1 km from Lake Geneva, ibis budget Thonon Les Bains is a non-smoking hotel offering a 24-hour reception, luggage storage and free Wi-Fi access throughout. Serviced by a lift, all…
Located 1.9 mi from Anthy-sur-Léman
Favourite
All hotels around Anthy-sur-Léman