Ville du Gard, Aimargues an integral part of the Petite Camargue. This town of nearly 5,000 inhabitants is located about twenty kilometers from Nîmes and around thirty kilometers of Montpellier.

The town of Aimargues holds its economic prosperity at the beginning of the twentieth century, the wine culture. Today, the city is rather turned to tourism with an important historical and economic heritage, and many buildings bearing witness to the former wealth of Aimargues. Sunny and close to its traditions, the city is a peaceful haven in which to relax and enjoy their holidays.

Active and rich entertainment, the city of Aimargues has a dynamism and a good life enjoyable.

Aimargues hosts within it an impressive architectural heritage, reflecting the history of this city of Gard.

Listed historic monument, Castle Teillan is clear of Aimargues. It was built between the sixteenth and seventeenth century. Ancient Roman castrum, it has a main building, a dovecote and a park dating meanwhile nineteenth century. Inside it, a fine collection of Roman antiquities catches the eye.

Built in the late nineteenth century, the farmhouse of Praviel present a viewpoint on the third floor. The city is home Aimargues twenty-six mas in total, also including Malherbes farmhouse built in the sixteenth century. He has seen big names of French arts as Paul Eluard, Leon Daudet, Erik Satie and Jean Cocteau.

The old Holy Cross Church and its clock tower, which today serves as a multipurpose room, form a monumental complex not far from City Hall.

During excavations, the cemetery has unveiled sarcophagi of the sixth century. Classified as an historic monument, ancient tombstones are found in the cemetery.

Unusually for France, Saint-Saturnin and St. Artimidora church has the inscription "French Republic Liberty, Equality, Fraternity" on its facade. Built during the Second Empire, it has a tower of 38 meters and stained glass from the workshops of Edward Didron famous Parisian master glassmaker.

Aimargues, ancient city, offers an important cultural and sports throughout the year.

The market is held every Sunday morning, and the city regularly holds local or wine markets. An old Christmas market is also at the end of the year.

In May, the Western Longhorn festival allows to learn about country music.

Every July, the living arts, Art'Aimargues held annually during the votive festival of Aimargures.

Abrivado The festival takes place every year in June with horse demonstrations.

In September, place Longhorne Aimargues motor show with a rally of cars and vintage motorcycles.

All leisure activities around Aimargues 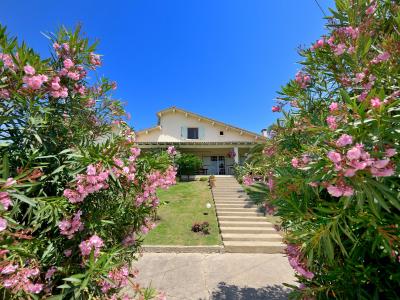 Mas Saint-Ange
9.8
25
Southern French farmhouse with 5 bedrooms in Lunel
69 € to 88 € per double room
Quiet guest house, 15 minutes from the beaches of La Grande Motte and Grau du Roi, and 20 minutes from the east entrance of Montpellier (Arena, airport…) Professionals or vacationers, you enjoy all year long excellent value for money : comfortable…
Located 3.9 mi from Aimargues
Favourite 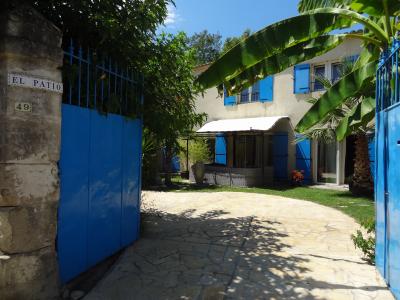 El patio Saint just
9.3
40
House with 3 bedrooms in Saint-Just
61 € to 70 € per double room
El Patio, a guest house that makes you feel good to be… ! Friendly Anne and Louis in their charming house completely restored in a Zen home with Mediterranean colors, the breakfast (with homemade cakes and jams) and meals for dinner (organic…
Located 5.2 mi from Aimargues
Favourite Pension des Masques, chambres d'hòtes
9.2
4
House with 4 bedrooms in Aubais
75 € to 85 € per double room
Welcome to the Pension des Masques. Our house is Aubais, a small idyllic village in the hinterland, on the border with the Camargue. You'll find many ways of walking and cycling. Not far from Aubais, runs the Vidourle, towards the Mediterranean.…
Located 5.9 mi from Aimargues
Favourite
All bed & breakfasts around Aimargues 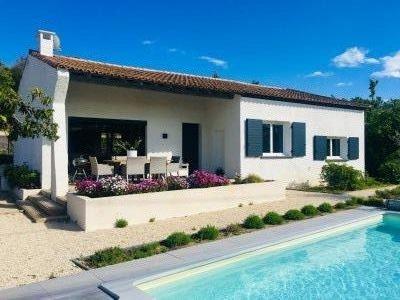 House of Murier
Villa for 6 people in Aigues-Vives
100 m², 3 bedrooms
750 € to 1995 € per week
Pretty detached house ideally located between Nimes and Montpellier in Languedoc-Roussillon, 30 minutes from the Mediterranean and its beaches. The house has been completely redesigned and converted into a warm and cozy holiday home. The house…
Located 4 mi from Aimargues
Favourite 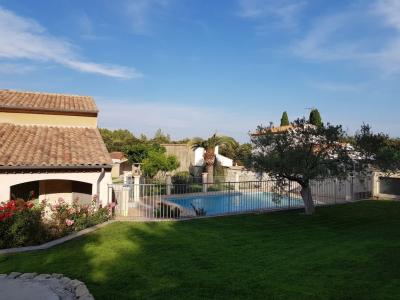 1 + 2 cottages
Villa for 6 people in Boissières
110 m², 3 bedrooms
910 € to 1260 € per week
Villa in the countryside : Relaxation and pleasure - Family house converted into 2 holiday rental cottages of 110 m² each, which can be rented together for 12 people (announcement N ° 111160) or, separately welcoming each 6 people. The entrance,…
Located 6 mi from Aimargues
Favourite 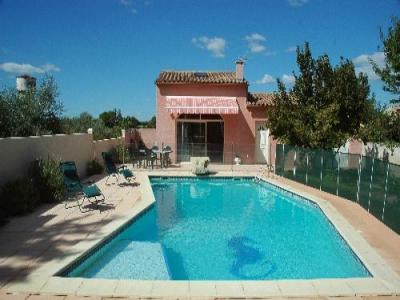 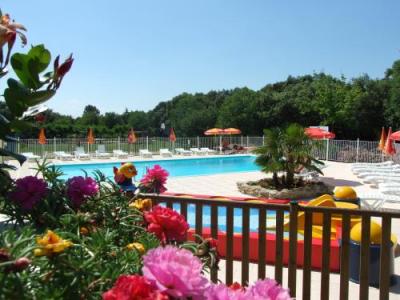 Camping Les Chênes
9.6
23
Campsite in Junas
90 pitches on 2ha
1650 € to 1860 € per day (2 pers / tent / car)
Under the sun Languedoc, in the shadow of its oaks, 30 min from the beaches, 20 minutes from Nimes and Montpellier, the Cevennes, Nathalie and Gilles welcome you for your holiday in the south of France. Discover our new book and trailers, mobile…
Located 6.9 mi from Aimargues
Favourite 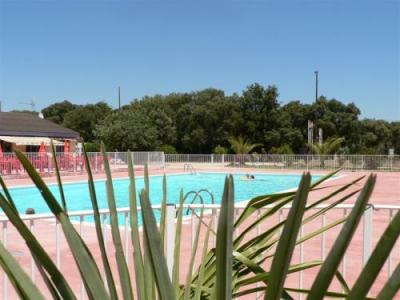 Domaine de gajan
Campsite in Boisseron
115 pitches on 3ha
15 € per day (2 pers / tent / car)
Quiet and shady camping for holidays between Mediterranean sea and Cevennes a small corner of paradise in the Camargue.
Located 8.5 mi from Aimargues
Favourite
All campsites around Aimargues Fasthôtel Nîmes Ouest
7.8
187
Hotel in Aimargues
Room from 57 €
This new hotel has opened in June 2008. It offers comfortable 2-star accommodation and good value for money. The Relais Fasthotel Nîmes Ouest Lunel presents a modern design; each of the 2 floors is served by a lift and there is an on-site restaurant…
Located Aimargues away
Favourite 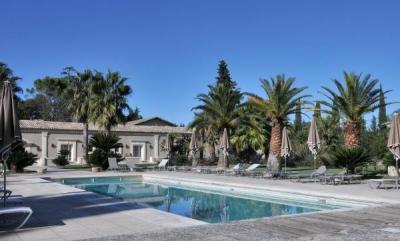 Les Palatines
8.5
30
Hotel in Marsillargues
Room from 60 €
Set in Marsillargues, 42 km from Saintes-Maries-de-la-Mer, Les Palatines offers a restaurant and free WiFi. Each unit is fitted with a balcony, a fully equipped kitchen with a microwave, a seating area with a sofa, a flat-screen TV and a private…
Located 2.2 mi from Aimargues
Favourite
All hotels around Aimargues